Greetings again from the darkness. “Thank you for your service.” For those of us who have never served in the military, we say the words because we don’t know how else to show our appreciation. Do the words ring hollow to those in uniform? Maybe. Probably. But how else can we honor these brave souls? What if we have them share a stage with a pop singing group during halftime of a football game? It’s this line between honor and propaganda that takes up much of the new movie from two-time Oscar winning director Ang Lee (Life of Pi, Brokeback Mountain).

The story is based on Ben Fountain’s 2012 novel, and revolves around soldier Billy Lynn’s and his fellow “Bravo” squad members as they make the rounds back home (in 2004) for publicity after their intense battle sequence is caught on camera. There is much at play here: how the soldiers interact with each other, how they are treated by the general public, how they are used by the team’s owner and the Army for self-serving reasons, and how Billy juggles the stress of war, the spotlight of heroism, and the demands from his family.

Director Lee opted to experiment with the ultra-realism of the new 120 frames per second in 4k 3D, rather than the standard 24 fps. Though this may seem like a minor detail that shouldn’t be addressed in a review of the movie, it’s impossible to ignore this impact. Technical advancements in film and digital have resulted in some exciting new effects for movies, but this high speed approach creates a soap opera look and feel that will likely be disorienting to many viewers. Although the full effect will only be available in New York and Los Angeles (due to shortage of projectors), the clarity on the close-ups is distracting, while leaving the background quite fuzzy and out of focus. Many will find this new look to be “not right” for a movie, and prefer the traditional look. Others may embrace the heightened sense of reality … of being right there with the characters. Of course, this is Ang Lee’s film, so there is no shortage of stunning visuals and expert shots.

Beyond the technical aspects, this movie is simply a bit clunky to watch, not very well written (screenplay by Jean-Christophe Castelli), not very well acted, and has an overall awkward and unfinished feel to it. Kristen Stewart plays Billy’s sister, and her limited screen time is the best part of the movie. Newcomer Joe Alwyn makes a decent reluctant (and lucky) hero in playing Billy, but he doesn’t have the chops to overcome the script weakness and the burden of carrying so many scenes. This is especially obvious in his unrealistic bonding scenes with cheerleader Faison (played by Makenzie Leigh). Their scenes together are nearly unwatchable.

Supporting work comes from Vin Diesel as Billy’s philosophical officer in recurring flashbacks to the war, Garrett Hedlund as the current squad leader, a miscast Steve Martin as team owner Norm Oglesby (a Jerry Jones type), and Chris Tucker as the incessantly yammering agent/producer trying to put a movie deal together for the soldiers. Other minor contributors include Tim Blake Nelson, Bruce McKinnon (in horrible make-up), Ismael Cruz Cordova, Deidre Lovejoy, and a couple of All-Pro players in Richard Sherman and JJ Watt.

Since there are some interesting and important elements to the story, the assumption here is that most effort went towards the experimental technical aspects. More attention to scene detail could have more effectively contrasted the soldier’s take on war versus the never-ending inclination of Americans to turn most anything into more and bigger entertainment … even Destiny’s Child isn’t enough. The questionable filmmaking decisions leave us with the shell of a good story, and too many sappy close-ups of actors emoting directly to the camera lens. The soldier vs hero debate deserves better, and the propaganda aspect deserves a more critical eye. 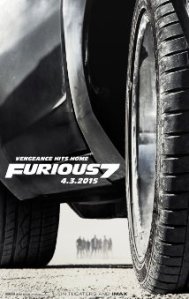 Greetings again from the darkness. “For Paul”. A touching tribute to the late Paul Walker provides an emotional end to the most high-octane (sorry about that) F&F episode yet … and the perfect victory lap (sorry again) for the franchise. Of course, we know that it won’t be the last, if for no other reason than easy box office money.

The franchise began in 2001, and the familiar faces are back: Vin Diesel as Dom, Paul Walker as Brian, Jordana Brewster as Brian’s wife Mia, Michelle Rodriguez as amnesiac Letty, Tyrese Gibson and Chris “Ludicrous” Bridges as comic relief Roman and Tej, respectively, and Dwayne “The Rock” Johnson as Agent Hobbs. New to the scene are Djimon Honsou as a terrorist, Ronda Rousey and Tony Jaa as elite henchmen (henchpersons?), Nathalie Emmanuel as super-hacker Ramsey, and Kurt Russell as the shadowy government-type cutting shady deals for fuzzy reasons. The biggest add is of course, Jason Statham as Deckard Shaw, the Black Ops big brother to Owen Shaw (Luke Evans) – silenced villain from the previous film (in which Statham made a brief appearance foreshadowing this story line).

Achieving remarkable success for what started as a fun little street racing cult film, this series thrives on its familiar characters, simple plot lines, staggering lineup of dream cars, and ever-louder and larger stunts, fights and set pieces. One of the earliest scenes features a fight scene that would be the climax of most action movies: The Rock vs Jason Statham. Rather than end or solve anything, this fight merely serves as a set-up for one of the film’s punchlines – involving The Rock and a plaster arm cast (pay no attention to that leg cast). In the middle, we get a too brief clash between Michelle Rodriguez and Ronda Rousey, but the real finale is a rooftop battle between Vin Diesel and Jason Statham that has such an extended cut-away, we almost forget they are going at each other.

In between those colossal fights, we get Paul Walker sprinting up the side of a bus that is sliding off a cliff, a wicked and armed drone, car chases galore – including one with a stealth chopper, synchronized10,000 foot car drops from an airplane, and most impressively, car jumps between the Etihad Towers in Abu Dhabi. That last one is not just any car, but a stunning red Lykan Hypersport … one with little resale value after its final trip.

Michelle Rodriguez’ character is fighting her amnesia, Ludacris and Tyrese play off each other like Laurel and Hardy, while Dom does his best Yoda impression, and Statham comes off like a revenge-seeking
missile from a Terminator movie. Every character gets their fair share of posing, preening, strutting and smirking. It would be an insult to call this over-the-top because that would imply we have previously seen
the top. This is high-speed, high-altitude mayhem that plays directly to a large fan base.

Personally, I’m not a devout F&F follower, and have seen only the first entry prior to this latest. My attendance for Furious 7 was driven (get it?) by my interest in seeing the tribute to Walker, and my personal code of seeing every Kurt Russell movie (don’t ask). However, I do understand the mass appeal, and I believe the followers will appreciate the approach of director James Wan (Saw, The Conjuring), who replaces 3 time series director Justin Lin. 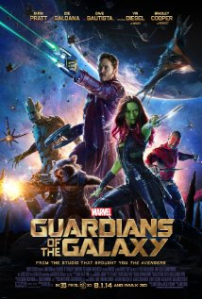 Greetings again from the darkness.  Are you ready for a new brand of Marvel movie heroes?  You surely know Iron Man, Captain America, Thor and Hulk, but it’s high time you are introduced to Peter Quill, Rocket Raccoon, Gamora, Groot and Drax – known collectively as the Guardians of the Galaxy. Instead of dark, brooding and super-serious, this group is not just funny … they are actually FUN!

The plot is admittedly a bit simple. Everyone is basically chasing a ball (the orb) around the universe.  Instead of good guys vs bad buys, it’s actually kinda bad guys vs really bad guys. See, the heroes of our story are, for the most part, criminals themselves. The main difference is, they aren’t on a quest for intergalactic super power or mega destruction like Ronan (Lee Pace).  Ronan makes for a pretty menacing villain, complete with a voice that shakes the theatre!

The band of misfits thrown together by circumstance actually provides much entertainment.  Chris Pratt (“Parks and Recreation“) is the self-nicknamed Star-Lord, better known as Peter Quill. The film begins in 1988 when his mother lay dying and he is abducted by aliens. Quill’s criminal activity has him crossing paths with Gamora, a green assassin played by Zoe Saldana; Rocket, a brilliant wise-cracking raccoon voiced by Bradley Cooper; Rocket’s bodyguard Groot, an unusually mobile tree with a limited vocabulary voiced by Vin Diesel; and the hulking, knife-wielding, bent on revenge Drax the Destroyer played by WWE star Dave “The Animal” Bautista.  It’s a rag-tag group of heroes unlike anything we have seen before.

Other colorful supporting work comes courtesy of a blue-faced Michael Rooker, who controls his lethal arrow through a series of whistles; Djimon Hounsou as a sparkly-eyed warrior; John C Riley as a galaxy cop; Karen Giillan as a smooth-headed daughter of Ronan; and Glenn Close as a community leader.  We also get the traditional Stan Lee cameo, plus Benecio Del Toro as The Collector (teased in Thor: The Dark World).  The music actually plays a strong supporting role with such classics as “Hooked on a Feeling” by Blue Swede, “Cherry Bomb” by The Runaways, and “Ooh Child” by The Five Stairsteps”.

Despite the lack of familiarity with these characters for most viewers, writer/director James Gunn (Slither) does a terrific job of having us quickly connect and even groot … err, I mean root … for these guys. Quill’s possession of a Sony Walkman to play his mother’s mix tape of songs from the 1970’s and 80’s give the film a very different flavor, having the familiar songs pop up at just the right time.

Pratt does an admirable job in the lead, although compared to the GQ of Tony Stark/Iron Man, his Quill is more Mad Magazine (funny and easy to like)  The best comparison I have for Quill is Han Solo, and for the movie it harkens back to 1978’s Superman … both very high compliments. It’s also the first time I have been completely caught off guard and laughed out loud at a Jackson Pollack reference!

**NOTE: If I had seen this movie as an 11-year-old boy, I would probably think it’s the coolest movie ever made.  Of course, they didn’t make movies like this when I was 11, so I have to enjoy them now.

SEE THIS MOVIE IF: you are a comic book fan but kinda tired of the all too familiar string of Avengers OR you just want to sing along to some classic songs of yesteryear (please don’t sit by me)

SKIP THIS MOVIE IF: a talking raccoon and tree are likely to give you nightmares, no matter how funny their lines are.