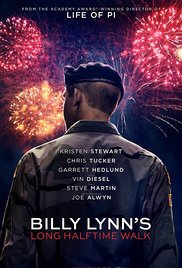 Greetings again from the darkness. “Thank you for your service.” For those of us who have never served in the military, we say the words because we don’t know how else to show our appreciation. Do the words ring hollow to those in uniform? Maybe. Probably. But how else can we honor these brave souls? What if we have them share a stage with a pop singing group during halftime of a football game? It’s this line between honor and propaganda that takes up much of the new movie from two-time Oscar winning director Ang Lee (Life of Pi, Brokeback Mountain).

The story is based on Ben Fountain’s 2012 novel, and revolves around soldier Billy Lynn’s and his fellow “Bravo” squad members as they make the rounds back home (in 2004) for publicity after their intense battle sequence is caught on camera. There is much at play here: how the soldiers interact with each other, how they are treated by the general public, how they are used by the team’s owner and the Army for self-serving reasons, and how Billy juggles the stress of war, the spotlight of heroism, and the demands from his family.

Director Lee opted to experiment with the ultra-realism of the new 120 frames per second in 4k 3D, rather than the standard 24 fps. Though this may seem like a minor detail that shouldn’t be addressed in a review of the movie, it’s impossible to ignore this impact. Technical advancements in film and digital have resulted in some exciting new effects for movies, but this high speed approach creates a soap opera look and feel that will likely be disorienting to many viewers. Although the full effect will only be available in New York and Los Angeles (due to shortage of projectors), the clarity on the close-ups is distracting, while leaving the background quite fuzzy and out of focus. Many will find this new look to be “not right” for a movie, and prefer the traditional look. Others may embrace the heightened sense of reality … of being right there with the characters. Of course, this is Ang Lee’s film, so there is no shortage of stunning visuals and expert shots.

Beyond the technical aspects, this movie is simply a bit clunky to watch, not very well written (screenplay by Jean-Christophe Castelli), not very well acted, and has an overall awkward and unfinished feel to it. Kristen Stewart plays Billy’s sister, and her limited screen time is the best part of the movie. Newcomer Joe Alwyn makes a decent reluctant (and lucky) hero in playing Billy, but he doesn’t have the chops to overcome the script weakness and the burden of carrying so many scenes. This is especially obvious in his unrealistic bonding scenes with cheerleader Faison (played by Makenzie Leigh). Their scenes together are nearly unwatchable.

Supporting work comes from Vin Diesel as Billy’s philosophical officer in recurring flashbacks to the war, Garrett Hedlund as the current squad leader, a miscast Steve Martin as team owner Norm Oglesby (a Jerry Jones type), and Chris Tucker as the incessantly yammering agent/producer trying to put a movie deal together for the soldiers. Other minor contributors include Tim Blake Nelson, Bruce McKinnon (in horrible make-up), Ismael Cruz Cordova, Deidre Lovejoy, and a couple of All-Pro players in Richard Sherman and JJ Watt.

Since there are some interesting and important elements to the story, the assumption here is that most effort went towards the experimental technical aspects. More attention to scene detail could have more effectively contrasted the soldier’s take on war versus the never-ending inclination of Americans to turn most anything into more and bigger entertainment … even Destiny’s Child isn’t enough. The questionable filmmaking decisions leave us with the shell of a good story, and too many sappy close-ups of actors emoting directly to the camera lens. The soldier vs hero debate deserves better, and the propaganda aspect deserves a more critical eye.

This entry was posted on Thursday, November 17th, 2016 at 11:22 pm and is filed under Drama, War. You can follow any responses to this entry through the RSS 2.0 feed. You can leave a response, or trackback from your own site.