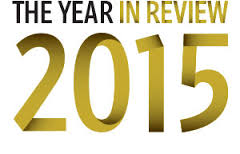 Greetings again from the darkness. Had a modern day Rip Van Winkle awoken from a 40 year slumber in 2015, he might have concluded it had been but a brief cat nap. Movie theatres packed ‘em in with such 1970’s throwbacks as Star Wars, Rocky, Mad Max, Lily Tomlin, Russian hockey, Fisher/Spassky, the Cold War, Marlon Brando, Mother Teresa, a society-jarring investigative journalism movie, and a hand full of interesting Westerns. There was even a menacing shark (ok, a Mosasaurus) and a documentary on the hope that Elvis is still alive. The only 70’s icons that seemed missing were a disco ball and Charlie’s Angels (though a re-boot is rumored).

The first ever $11 billion box office year eclipsed expectations and provided not just some exciting blockbusters, but also quite a few creative and interesting smaller films, indies and documentaries. For the year, I reviewed 234 movies that were released during 2015. The vast majority of these proved to be interesting, emotional and/or entertaining, with the best of the bunch jolting the cinematic experience by bringing something new. Among those blazing new paths of risky filmmaking: Sean Baker shot Tangerine with iphones, Sebastian Schipper and Sturla Brandth Grovler shot 2-plus hours of Victoria in a single take, Laszlo Nemes used shallow focus and sound to create the frenetic feel of Son of Saul, and Doug Aitken compiled 62 one minute films shot on a cross-country train ride for Station to Station. Chances are good that, regardless of your movie tastes, you can find more than a few in this most recent vintage that will deliver some viewing pleasure.

Rather than an arbitrary Top 10 list, my preference is to present the natural break. You will notice that this year’s “Best of” list is broken into two sections: my Top 5 movies of the year, and the Next Best 12 movies (in alphabetical order). You will also find a brief description of each, as well as a link to the full review for the Top 5. As always, your feedback is welcome!

AMY – touching and powerful documentary on the all too brief life of Amy Winehouse, a musical genius and emotional trainwreck

GRANDMA – when Lily Tomlin says “Because I’m her grandmother”, no other explanation is needed. Her scenes with Sam Elliott are heart-breaking and among this year’s best

45 YEARS – Charlotte Rampling delivers a knockout performance in this soulful and raw look at the damage caused by secrets in a long-term marriage. It’s written and directed by Andrew Haigh, who seems to be providing a cautionary lesson

SICARIO – gripping suspense and thrilling action combined with deceit, back-stabbing and the complex world of drug cartels on the U.S./Mexico border. It also features the year’s most uncomfortable family dinner scene

SON OF SAUL – the unusual filming style of director Laszlo Nemes heightens the tension of the already dreadful environment at Auschwitz, as we follow Sonderkommando Saul in his attempt to have his son’s body properly buried

TANGERINE – much more than “the iphone movie” (it was filmed entirely with iphones), viewers have connected with the plight of the two transgender leads as they battle their way through the streets of Los Angeles

THE MARTIAN – director Ridley Scott is pushing 80 and also still pushing the envelope, as Matt Damon promises to “science the s*** “ out of his being stranded on Mars. One of this year’s most popular movies and the most creative in fertilizing potatoes

BEST OF THE REST (surely you can find something to watch!)

ALL THINGS MUST PASS: THE RISE AND FALL OF TOWER RECORDS

DEEP WEB – the impact of the dark web

HE NAMED ME MALALA – she pushes for education of girls globally

LAMBERT & STAMP – unlikely managers of The Who

MOST LIKELY TO SUCCEED – analysis of U.S. education system

SWEETHEARTS OF THE GRIDIRON – The Kilgore Rangerettes, since 1940

THAT SUGAR FILM – the evils of the sweet stuff

THE BLACK PANTHERS: VANGUARD OF THE REVOLUTION

MOST DISAPPOINTING (not necessarily the worst, just expected more)

BY THE SEA – ultimate narcissism from a narcissist

OUR BRAND IS CRISIS – lazy filmmaking and acting

I look forward to hearing about your favorites of 2015, and feel free to pass this along to other movie lovers.

SEE YOU AT THE MOVIES!!