2012 in Movies will forever be remembered for the tragic events that occurred on July 20 in Aurora, Colorado.  The despicable act stunned us all, and as expected, human spirit prevailed. 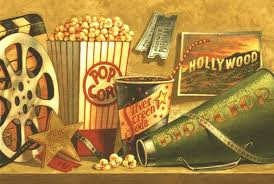 Those predictions of the death of cinema can now be filed away with The Mayan calendar. While both may prove correct someday … that day has not yet arrived. In fact, civilization remains as present and obnoxious as ever; the U.S. avoided the fiscal cliff (at least temporarily); and the Movie Box Office set an all-time record with $10.8 billion (up 6% over 2011) while posting the first increase in actual ticket sales in three years (1.36 billion tickets sold). Also impressive is the fact that 3 movies grossed over $1 billion worldwide (The Avengers, The Dark Knight Rises, Skyfall) and 28 movies topped $100 million in the U.S. alone.

Despite the online haters, powerful home theatres, and high ticket/concession prices, a great many people still enjoy seeing movies the way that filmmakers intended … with the inconsiderate masses and a sticky floor. There is no way to replicate the feeling of 300 fellow audience members breathlessly awaiting the 13th Amendment vote with a pacing Abraham Lincoln (Daniel Day Lewis in Lincoln), straining to see around the next dark corner as SEAL Team Six maneuvers through the Osama bin Laden fortress (Zero Dark Thirty), or simultaneously smiling as a 6 year old Bayou girl proclaims “I’m the Man!” (Beasts of the Southern Wild).  The silver screen has always held a magical power over us, and 2012 provided plenty of moments to remember.

Speaking of haters, I use the term to describe those tweeters and bloggers who seem to buy into the Reality TV approach … be outrageous in your criticism and the attention will follow. These days, it requires little thought or effort to “publish” one’s perspective. This results in many kneejerk assaults on such topics as how slow the Lincoln story moves, how Cloud Atlas and Life of Pi inexplicably changed some bits from the book versions, how The Dark Knight Rises was awful because it wasn’t up to the previous film’s standard, and how Argo turned a true story into a fictionalized airport chase. Now, I have long maintained that the joy of movies stems from our ability to spend two hours watching and two weeks debating. My concern is that the abundance of haters is having an impact on the pleasure some find in discovering the newest movie, or even keeping them out of the theatre. The hope is that you can utilize my reviews and commentary for the purpose they are meant – to provide some insight and guidance, and even perspective, on the latest releases.  If I somehow motivate you to take a chance on some indie or foreign film, all the better!

Before we get to my Best of 2012 list, let’s go over a few things. First, these are NOT my Oscar predictions, but rather my personal preferences. The list is determined by the quality of films of each year, and there is no mandate for a Top 10 … I go with the natural break. This year there are 12 films I rate above all others. You will also see the 10 “next best” and, in a tribute to Casey Kasum, this turned into the Top 40 films I recommend from 2012 (just a coincidence … really!).

** the links to my full reviews are included for the Big 12.  You may search on the blog for any of the other films listed.

Daniel Day Lewis shows once again why he is the most talented actor working today, and among the best of all-time.  Lewis and director Steven Spielberg give us a peek at the behind-the-scenes politicking that occurred as Lincoln frantically worked to get the 13th Amendment passed before the Civil War ended.  Though it was more than 145 years ago, the party lines drawn are quite similar to what we experience even today.  The film is a wonderful time capsule of a historical period for the United States of America.

Quentin Tarantino is often accused of making films for his own amusement. Since he may possess the foremost encyclopedic mind for film history, this works to the advantage of the rest of us movie lovers.  This time out, he takes on the brutal business of slavery, and does so with his usual colorful, creative and violent manner.  With a tip of the cap to spaghetti westerns and blaxploitation genres, QT stretches his writing skills to provide the most interesting characters of bounty hunter Dr. King Schultz, freed slave Django, psychotic plantation owner Calvin Candie, and devious house slave Stephen.

Director Ang Lee adapts the previously unfilmable book in such a powerful 3D presentation that we don’t really care how much is real and how much is fantasy.  The shipwreck sequence is one of the most fascinating scenes of the year, and first time actor Suraj Sharma carries the film, along with his lifeboat partner Richard Parker, for a very lonely 227 days.  Whether you have read the book or not, you will see visuals never before seen on screen.

A fact-based and tension-packed presentation of the CIA-Canada cooperative scheme to extract six American diplomats out of 1980 Iran, which happens to be immersed in revolution.  Director Ben Affleck takes a few liberties with the final airport sequence, but much of the story is filmed very closely to actual events.  It takes Hollywood to film such an outlandish strategy, which was of course constructed by Hollywood (represented by a funny Alan Arkin and John Goodman).

Christopher Nolan somehow managed to satisfy the true fans of his Batman trilogy by going big in the finale. As a standalone, the film didn’t work for some, but that mattered little to the fanboys (including me). Bane, and his controversial voice, immediately became a wrecking ball unlike we had previously seen in Gotham. Bruce Wayne overcame his pouting and lack of respect to pass the torch in a most creative manner. The loose ends were connected and the rousing fight scenes were bone and back breaking … yes, everything we could ask for as Christian Bale and Mr. Nolan bid farewell to the character.

Welcome back Robert DeNiro! Those under age 30 have always wondered what the fuss was about for the Fockers dad.  Toss in Jacki Weaver, Jennifer Lawrence and the best yet from Bradley Cooper, and we have a funny and insightful look at emotional and psychological issues so prevalent today.  Director David O Russell (The Fighter) has a way of letting us laugh at ourselves, while also making us uncomfortable.  This makes for more than a few terrific movie moments.

Yes it’s a French movie and you will have to read sub-titles (unless you speak French). Trust me that this one is well worth the minimal reading effort required.  It makes statements on class, race, disabilities and the need to maintain purpose in life and spirit of the heart. Reminders abound that we shouldn’t always judge people by our first impressions, be they rich or poor, black or white. Omar Sy is a wonder to behold.

Writer/Director Wes Anderson has only made seven feature films.  Each one is a unique and fascinating experience, though often challenging for the mass audience.  This is a little film focusing on a couple of youngsters in New England who are searching not just for their own identity, but also the meaning behind life’s often ludicrous daily activities.  Newcomer Kara Hayward more than holds her own in the acting troupe that includes Edward Norton, Frances McDormand, Bill Murray and Bruce Willis.

9. BEASTS OF THE SOUTHERN WILD

This may be the biggest crowd-pleaser of the year. It’s a ferocious look at post-Katrina poverty through the eyes of a six year old powerhouse played by Quevenzhane Willis and her no-nonsense dad played by Dwight Henry.  It’s the first acting job for either and that in itself is unbelievable. It’s also the first feature film from director Benh Zeitlin and was filmed with a budget under $2 million.  Wow.  Just wow.

10. THE PERKS OF BEING A WALLFLOWER

While The Hunger Games is the literary adaptation that raked in the cash, it’s actually writer Stephen Chbosky (who directed his own teen novel) that rings most true to teenage life.  These characters will strike a chord with everyone who attended high school in the last 50 years.  It’s also a chance to see Emma Watson break the Harry Potter chains, and another chance to see one of the most powerful under-20 actors in Ezra Miller. The story is funny, maddening and sad … in other words, it’s exactly like teenagers.

It seems that most films taking place in an academic environment usually center around an inappropriate relationship between teacher and student.  This film from Israel instead focuses on the insecurities and competiveness of those in positions of intellectual power … and this time it’s between father and son!  Dysfunctional families are nothing new for movies, but this battle between father and son professors hits the sweet spot in reality, yet provides more than a few humorous moments.

Disaster movies tend to be over-the-top special effects extravaganzas.  Not this one.  The catastrophic tsunami that devastated Thailand in 2004 is recreated with exquisite and painful expertise. And while that should be enough, it’s actually the true story of one family’s battle for survival and reconciliation that separates this one from the others.  Young Tom Holland as Lucas delivers one of the grittiest performances every by a teen actor.  Bring a tissue or two.

Bernie – Jack Black is the nicest murderer ever

End of Watch – the best street cop movie in years

Searching for Sugarman – documentary on Sixto

Dr. Strangelove: Or How I Learned to Stop Worrying and Love the Bomb (1964)

SEE YOU AT THE MOVIES!!