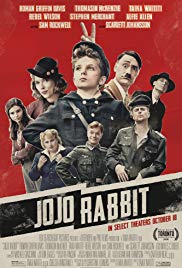 Greetings again from the darkness. Welcome to the most divisive movie of the year. Some will scoff at the idea and deride the filmmaker without ever even seeing the movie. Some will relay disgust after seeing the movie. A few won’t appreciate the style or structure, and will fail to find the humor. Ah yes, but some of us will embrace Taika Waititi’s wacky adaptation of Christine Leunens’ 2018 novel “Caging Skies” as one of the funniest and most heart-warming films of the year … fully acknowledging that many won’t see it our way.

One wouldn’t be off base in asking why a successful filmmaker would tackle such a risky project: a coming-of-age comedy-drama-fantasy about a 10 year old Nazi fanatic who has as his imaginary friend, not a 6 foot rabbit, but the Fuhrer himself, Adolph Hitler. After all, writer-director Waititi is coming off a couple of brilliant indies (2014’s WHAT WE DO IN THE SHADOWS, and 2016’s HUNT FOR THE WILDERPEOPLE) and a major score with Marvel money on THOR: RAGNAROK (2017), arguably the most entertaining superhero movie of the past few years. He certainly could have continued to cash in with ‘safer’ choices; however, Mr. Waititi sees the world differently than most of us. He finds humor in the drudgery, and humanity in malevolence. He’s also a bit goofy.

Playing over the opening credits is the German version of “I Want to Hold Your Hand”, as we see old clips of German citizens cheering for Adolph Hitler in a similar manner to how fans used to scream for The Beatles. World War II is nearing the end as we meet 10 year old Jojo Betzler (newcomer Roman Griffin Davis). Jojo is fervent in his fanaticism towards the Nazi way, and buys into the belief that Jews are monsters with horns on their head. He’s such a believer that his imaginary friend is actually Hitler, well at least a bumbling boisterous version played by the filmmaker himself – enacted to extreme comedy effect (recalling a bit of Chaplin in THE GREAT DICTATOR). Mel Brooks managed to play Hitler to a laughable extreme in “Springtime for Hitler” in THE PRODUCERS, but the only thing missing her from Waititi’s costume is an old timey dunce cap.

Jojo lives at home with his mother Rosie (Scarlett Johansson), while dad is off fighting on the front line. Ms. Johansson’s performance is terrific (despite limited screen time) as she creates a believably warm bond with her son during horrific times. Soon, Jojo is off to a Nazi camp designed to teach the boys how to fight (and burn books), as the girls learn the virtues of having babies. The camp leaders are Captain Klenzendorf (Sam Rockwell), who is a bit of a joke on the surface, but more interesting the deeper we dig; Fraulein Rahm (Rebel Wilson) who boasts of having 18 Aryan babies; and Finkel (Alfie Allen) a violent psychopath. At camp with Jojo is his best friend Yorki (newcomer and scene-stealer Archie Yates), and the two show what a genuine friendship can be as the movie progresses.

Things change quickly for Jojo when, by happenstance, he discovers a Jewish girl living in the walls of his home. Elsa (Thomasin McKenzie, LEAVE NO TRACE) shows none of the characteristics that Jojo has been brainwashed into believing all Jews possess. She has no horns, flashes a good sense of humor, and is actually very nice and knowledgeable. In other words, she’s no monster. As they get to know each other, Jojo realizes this “nice” Jewish girl contrasts starkly with his lunatic hero Adolph.

Waititi’s film is ingenious satire, and it likely won’t sit well with those who think not enough time has passed to justify making fun of Nazi atrocities. It’s funny and heavy, and deals with some thought-provoking matter in an unusual way. The “Heil Hitler” count approaches the ‘F-word’ frequency of most Tarantino movies, and there is a German Shepherd gag that caught the audience off-guard. Stephen Merchant’s Gestapo search of Jojo’s house is comedy at its weirdest. The movie messes with your head as it’s some odd blend of SCHINDLER’S LIST, “The Diary of Anne Frank”, and an extended Monty Python skit.

It’s rare for a film that borders on slapstick at times to have so many touching and emotional moments. The actors are really strong here, especially Ms. Johansson and Ms. McKenzie, who as gutsy Elsa, proves again she is quickly becoming a powerhouse young actor. Roman Griffin Davis carries a significant weight in the story despite being a first time actor, and I can’t emphasize enough how young Archie Yates will steal your heart while he’s stealing his scenes. Michael Giacchino’s score and Mihai Malaimaire Jr’s terrific cinematography work well with Waititi’s vision … a satirical vision that would never work outside of his unique filmmaking talent. The story is basically proof of the adage, ‘Kill ‘em with kindness’, when what we are really killing is hatred. At its core, this is a story of humanity and human nature, and how we grab hold of the wrong thing until the truth becomes evident. Now, please pass the unicorn.

Greetings again from the darkness. The ultimate cinematic dilemma … how to make the next comic book movie stand out from the (many, many) others? The brilliant answer comes from director Taika Waititi and co-writers Eric Pearson, Craig Kyle and Christopher Yost – a screwball superhero action film that delivers not only the required alien war scenes, but also a campy villain for the ages in a movie that may be the funniest of the year.

For those who prefer their superheroes dark and brooding, this one will be a shock. Prepare for Jeff Goldblum as the Grandmaster – the most polite villain we’ve seen in awhile, and one who looks to be straight out of the 1960’s “Batman” series. Chris Hemsworth as Thor is one of many returning actors/characters, only this time he really gets to flash his comic timing on top of his Thunder God biceps. His love-hate, trust-no trust, see-saw relationship with brother Loki (Tom Hiddleston) is in full force, as is the Bruce Banner banter with The Hulk (Mark Ruffalo). It’s certainly more in line with GUARDIANS OF THE GALAXY than the previous movies for Avengers.

As much fun as Goldblum brings to the party, this is really Cate Blanchett’s show. She is the frightening (with a dash of camp) Goddess of Death, and long-lost sister of Thor and Loki, and daughter of Odin (Anthony Hopkins). With a headdress that puts everyone at the Kentucky Derby to shame, Hela’s enormous powers are such that she crumbles Thor’s mighty hammer with little effort – just to remind everyone that big sisters are renowned for messing up younger brother’s toys.

Of course, with that title, we know that the story revolves around what could be the end of Asgard. Joining in the fun are: Idris Elba who is back as Heimdall, Tessa Thompson as a master of one-liners Valkyrie, Karl Urban as Skurge – rewarded with a wonderful exit scene, Ray Stevenson returns as Volstagg, and rocky alien Korg who is voiced by director Waititi. Fans of the series will be happy to know other familiar faces pop up periodically – one especially magical sequence teaches Loki a quick lesson.

In addition to the main rescue story line, the powerful villains, and crazy aliens, there are numerous nods and tributes to previous versions (notably Planet Hulk, and Fantastic Four), and a hilarious early stage play with three cameos that make it clear, big time laughter is here to stay. It’s fun to catch the reunions from such previous projects as Star Trek, JURASSIC PARK and Westworld.

Special acknowledgment goes to director Taika Waititi for hilariously taking the comic book film world down a different path. He’s known for his comedic projects like HUNT FOR THE WILDERPEOPLE (one of my favs from 2016), WHAT WE DO IN THE SHADOWS, and his work on the brilliant but short-lived “Flight of the Conchords”. It’s still very much a Marvel movie, with visible fingerprints of Stan Lee, Larry Lieber, and Jack Kirby. It’s also a fantastic adventure film that sets the stage for next year’s AVENGERS: INFINITY WAR, while also featuring the best use ever of Led Zeppelin’s “Immigrant Song”. So get ready to rock, roll and rollick in a film that is just about as much fun as you can have in a theatre.

Greetings again from the darkness. It just doesn’t seem very many movies are designed to be funny to a wide range of viewers. There are raunchy comedies for taboo lovers. There are comedies for young kids. There are even Nicolas Cage movies for unintentional laughs. But writer/director Taika Waititi actually delivers a thoroughly entertaining movie that will generate laughs across multiple generations … it’s quite simply, a fun time at the theatre.

Based on the 1986 book “Wild Pork and Watercress” by Barry Crump, who himself is a bit of a legendary figure in New Zealand, the film begins with Child Protective Services (or whatever it’s called in New Zealand) dropping off 12 year old Ricky Baker to his new foster family. Paula, the CPS agent, considers Ricky a lost cause and describes him as “a very bad egg” as she rattles off his list of previous rebellions to new foster mom Bella, who takes note of Ricky’s heft with a couple of wisecracks – delivered with a well-meaning smile.

In a terrific screen introduction, “Uncle” Hec slowly comes into frame flashing a world class scowl and a wild boar slung over his shoulder. Ricky continues his habit of running away at night, but Bella slowly wins him over with her kindness, understanding and breakfast offerings. A tragic occurrence and fear of being shipped back to the juvenile center, has Ricky disappearing into the New Zealand bush. Soon enough Hec catches up and the two begin a relationship that is the core of the film.

Rima Te Wiata plays Bella as a perpetually optimistic woman with a sincere drive to help Ricky adjust and find some joy in life. Sam Neill plays Hec in full grumpy curmudgeon mode … a nice compliment to the extraordinary presence of Julian Dennison (Paper Planes) as Ricky. Ricky and Hec together are a hoot to watch. It’s not simply the generational differences, but also a clash of one man who wants little more than to be left alone and a young boy who wants little more than to be noticed and cared about. It’s not so much the direction of their relationship that surprises, but rather the manner in which it develops.

Director Waititi’s next film is Thor: Ragnarok, so this makes us appreciate even more his pleasant little indie film that features not just colorful and interesting characters, but the beautiful landscape of the New Zealand bush … much of which we see during the humorous manhunt for Hec and Ricky. It’s a farcical comedy with a dose of profundity and loads of adventure for two social misfits. Rachel House is pretty funny as the obsessed CPS worker, and Rhys Darby (“Flight of the Conchords”) is downright hilarious as Psycho Sam. Watching criminial-wannabe Ricky literally count off his Haiku, leaves little doubt as to why this one has been such an “audience favorite” at multiple film festivals.