THE ELECTRICAL LIFE OF LOUIS WAIN (2021) 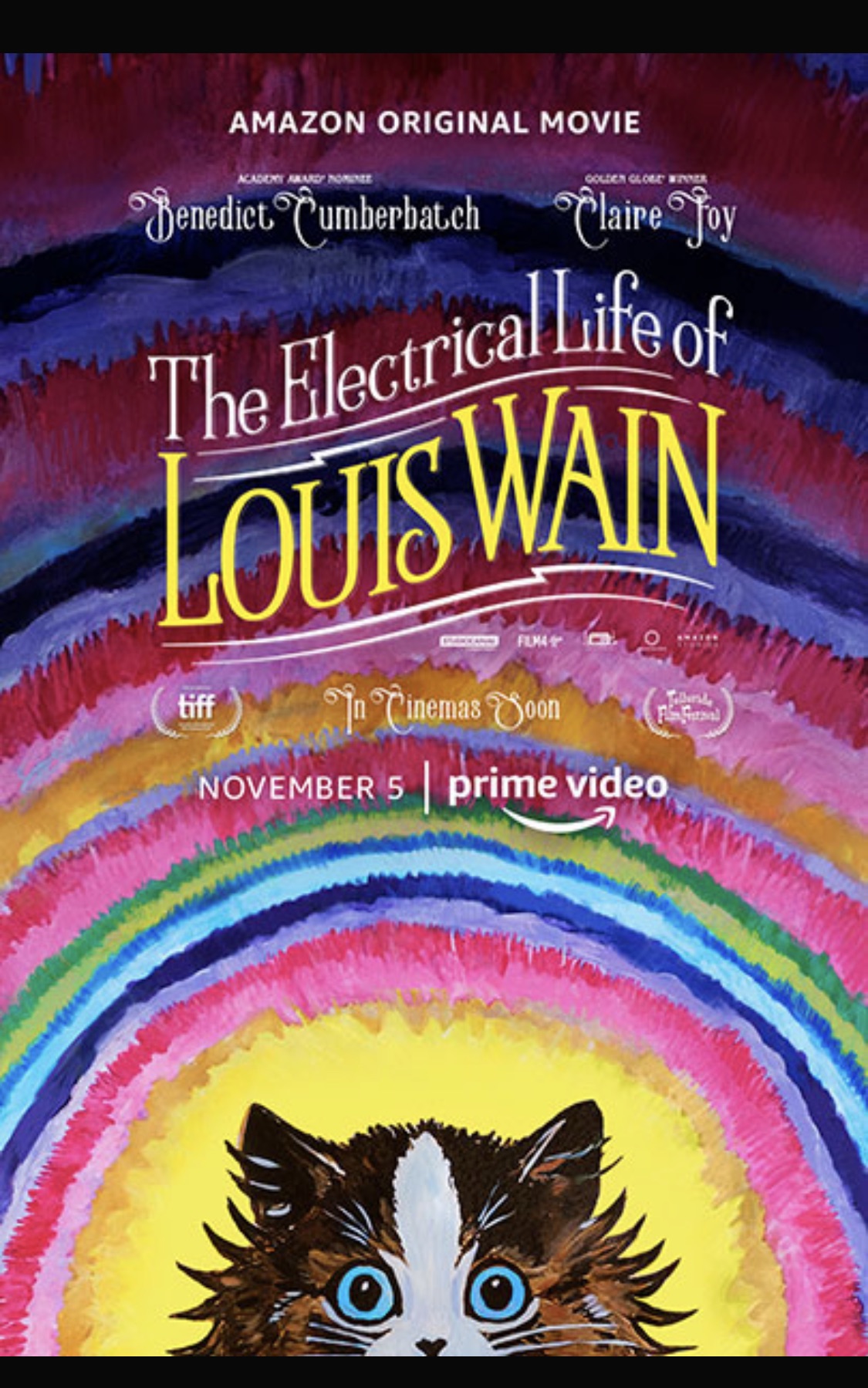 Greetings again from the darkness. If you fancy yourself a cat lover, you’ve likely seen his drawings, or at least some of the many ‘copies’ that other artists have produced over the years. Louis Wain was a prolific British illustrator, best known for his anthropomorphic paintings and drawing of cats (think of the kitschy paintings of dogs playing poker). Writer-director Will Sharpe and co-writer Simon Stephenson have delivered a biopic of Wain that focuses less on his art, and more on his gradual mental breakdown.

The film opens in 1881, and Louis Wain (played by Benedict Cumberbatch) is a young man, whose life has just drastically changed. The death of his father has forced Wain into the role of breadwinner for his five younger sisters and their aging mother. Initially, we aren’t sure what to make of Wain. His stern and demanding sister Caroline (Andrea Riseborough) is unforgiving of his whims and demands that he find steady work to support the family. An interview with an editor/publisher played by Toby Jones allows us to see what a gifted illustrator Wain is … and his speed is substantially due to an incredible ability to draw with both hands simultaneously.

Wain’s eccentricities include a belief in the electrical currents that drive all life forms. The film doesn’t spend much time on this, but it seems to be a cog in his mental illness – deemed schizophrenia (though that’s been debated). Wain overcomes his insecurity around his cleft lip and marries Emily Richardson (Claire Foy), the governess to his sisters. For the times, this was quite a scandal, given the differences in age and social standing of Louis and Emily. However, it seems as though she was the only one who understood and encouraged him as an artist.

When tragedy strikes, Wain becomes inspired by their pet cat, Peter. In fact, Peter becomes Wain’s muse, and leads to thousands of drawings for publication in newspapers, magazines, greeting cards, and just about every other platform. Olivia Colman provides some lively narration, and Taika Waititi and Nick Cave both have brief cameos. Cumberbatch is a bit over-the-top with his tics in the first half of the film, but his talent is clear as he portrays a man whose mental health deteriorating, and one who must rely on his special skill to find purpose. Wain spent the last 15 years of his life in a hospital, illustrating right up until the end. While Wain’s legacy lives on in his work, there is also a message here – embrace your weirdness!

Amazon Studios will release THE ELECTRICAL LIFE OF LOUIS WAIN in theaters on October 22nd, 2021 and on Prime Video on November 5th, 2021

This entry was posted on Thursday, October 21st, 2021 at 10:09 pm and is filed under Drama. You can follow any responses to this entry through the RSS 2.0 feed. You can leave a response, or trackback from your own site.