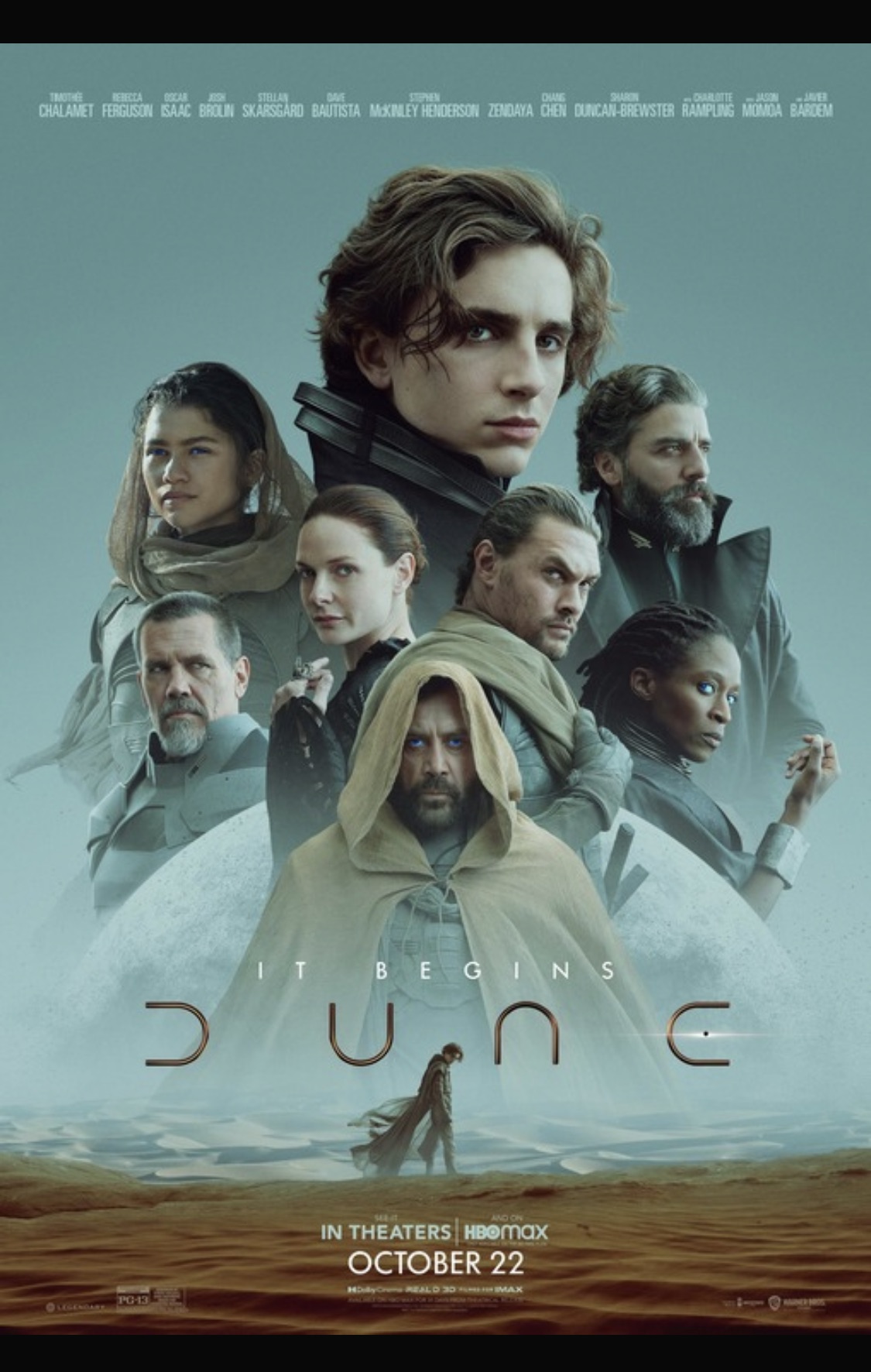 Greetings again from the darkness. It’s been nearly 40 years since David Lynch directed DUNE (1984). The film received an Oscar nomination for Best Sound, and has since been a cult favorite, though not one I’m particularly drawn to. All these years later, Frank Herbert’s 1965 novel (there are 5 sequel novels) has been re-made by acclaimed writer-director Denis Villeneuve (ARRIVAL, 2016) and his co-writers Eric Roth (Oscar winner, FORREST GUMP, 1994) and Joe Spaihts (PROMETHEUS, 2012). The new version looks absolutely fantastic, even if the story is a bit convoluted and the characters don’t always make the best, or even logical, decisions.

The year is 10191, likely the most futuristic movie we’ve seen. Oscar Isaac is Duke Letto Atreides and Rebecca Ferguson is Lady Jessica Atreides, though the story mostly focuses on the son, Paul, played by Timothy Chalamet. The story revolves around the protection of spice, the most valuable resource in the universe/galaxy. However the real focus is on politics and power plays … so I guess not much really changes over the next 8170 years – except, of course, the colonization and travel between multiple planets (surprisingly, none of these planets is named Elon or Bezos). There is much talk of “the plan” with emphasis on whether young Paul is “the one” mentioned in their legends. Paul does have some special abilities, but Chalamet’s understated (and mostly monotone) portrayal makes everyone, even Lady Jessica, a bit unsure of whether he’s the leader they need.

The supporting cast is impressive and all do their part to drive the action and story forward. Jason Mamoa is Duncan Idaho, the warrior who humorously belittles Paul’s fragile physical frame. Josh Brolin is Gurney Halleck, the bodyguard to the noble family, and Charlotte Rampling plays the Reverend Mother (a creepy nun). Oscar winner Javier Bardem is under-utilized as Stilgar, while Zendaya shines as Chani, one who bonds with Paul. Of course the most outrageous role finds Stellan Skarsgard (with some heavy make-up and special effects) as the grand emperor of Harkonnen, with Dave Bautista as his brother, the Beast.

For me, the movie’s technical aspects are what stand out. It deserves awards consideration in multiple categories, especially Sound, Visual Effects, Cinematography, and Score. Oscar winner Hans Zimmer really delivers a score that compliments and enhances what we see on screen. Cinematographer Greig Fraser has been involved in numerous high profile projects, like ROGUE ONE: A STAR WARS STORY (2016) and the highly anticipated THE BATMAN (coming in 2022).  The effects are special and include the sandworms, as well as dragonfly choppers that are quite impressive. It was a bit annoying to see the desert sand blowing constantly, yet goggles and masks are hardly ever used. I guess these faces are too expensive to cover up!

Familiarity abounds as some bits recall MAD MAX, EDWARD SCISSORHANDS, STAR WARS, and THE MATRIX. Director Villeneuve shot the film in Norway and Jordan, and to answer the question from fans of the original … no, Sting does not make a cameo appearance. The film looks stunning and will likely satisfy the target audience. Whether it’s enough to expand the audience is something we will know soon enough. The film ends with “This is only the beginning”, and Mr. Villeneuve has Dune Part Two in the planning stages.

The film will be released October 22, 2021 in theaters, on IMAX, and streaming on HBO Max

This entry was posted on Thursday, October 21st, 2021 at 10:18 pm and is filed under Action, Fantasy, Sci-Fi. You can follow any responses to this entry through the RSS 2.0 feed. You can leave a response, or trackback from your own site.