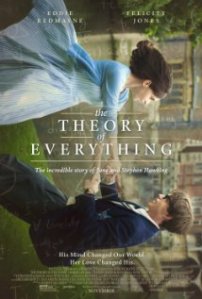 Greetings again from the darkness. Stephen Hawking would most certainly make anyone’s list of the most fascinating people to have overcome severe obstacles in life to achieve greatness. Even today, at age 72, Hawking remains one of the foremost physicists and cosmologists. His extraordinary mind now 50+ years trapped inside a body that failed him, and as we learn, should have killed him by the time he was 23.

Director James Marsh is known for his work on two documentaries: Project Nim, and Man On Wire. His flair with reality in those two films is mostly kept in check with this conventional biopic. Based on Jane Hawking‘s book “Travelling to Infinity: My Life with Stephen”, the film does a nice job of showing us the stages of his motor neuron disease, while never digging too deep into the resulting hardships for Stephen or Jane (his wife).

Eddie Redmayne (Les Miserable, My Week with Marilyn) delivers the type of performance that often results in awards. His physical contortions capture the Hawking we have all seen, yet he also emotes the charm and wry humor that accompanies his genius. Jane is played by Felicity Jones (so terrific in Like Crazy) and since it’s based on Jane’s book, we are provided a glimpse into her strength and tenacity as she refuses to give up on Hawking or their relationship.

Some basic science is touched upon here – mostly through beer foam on a table or the glowing embers from a fireplace, but it’s highly recommended that you read Hawking’s best selling book “A Brief History of Time” if you have not already done so. It’s written using language so clear and concise, that even I almost understood it! Much more than science, this film is about the tenacity of Jane and her ability to keep Stephen moving forward while still pursuing her own studies and raising their three kids.

The evolution of their relationship is deftly handled, even as they each drift away towards others. When the break eventually occurs, it is the one moment in the film where heartfelt emotion is on full display. Oddly enough, it’s more relief for both parties than disappointment. In light of the doctor’s original estimate of two years to live, this moment is quite poignant.

You can see this one without being intimidated by the science, and instead get a glimpse at Hawking’s challenges and the strength of Jane.

SEE THIS MOVIE IF: the personal relationship and struggles of Hawking and his wife are of interest to you.

SKIP THIS MOVIE IF: you are looking for some in-depth analysis of Hawking’s genius