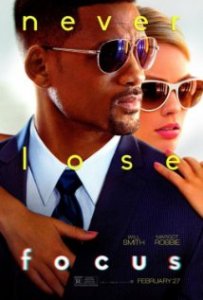 Greetings again from the darkness. Movies about “the con” have had many different looks over the years: the suave coolness of Oceans 11, David Mamet’s twisted perspective in House of Games, the tongue-in-cheek teamwork of Redford and Newman in The Sting, the demented mother-son approach in The Grifters, and of course, the slapstick style of Steve Martin in Dirty Rotten Scoundrels. All of these committed to one style and made it work. The latest from the writing/directing team of Glenn Ficarra and John Requa (I Love You Phillip Morris, Crazy Stupid Love) can’t seem to decide if they want the audience in on the joke, or if they rather the audience be the butt of the joke.

Will Smith plays Nicky, a third generation con man who is also a very conservative entrepreneur. He runs his cons as a business and prides himself on never taking unnecessary risks, ensuring the odds are in his favor. His professional curiosity lands him in an awkward situation with Jess, played by Margot Robbie (The Wolf of Wall Street), who clumsily mistakes Nicky for an easy mark. Instead, he agrees to mentor her during Super Bowl week in New Orleans. This sequence is the best and most entertaining part of the film.

The second half of the film complicates things with the do they or don’t they love story between Nicky and Jess, as well as a few other messy personal relationships. The fun here lies with the con, not the love story, and that’s where the focus should stay. In fact, the most interesting characters aren’t Nicky and Jess, but rather a riotous Adrian Martinez (as Nicky’s computer whiz assistant), Rodrigo Santoro (as a racing team owner trying to cheat the competition), Gerald McRaney (a hoot as Santoro’s crusty old henchman), Robert Taylor (TV’s “Longmire”) as one of Santoro’s competitors, and BD Wong as Nicky’s betting adversary in the film’s most ludicrous sequence (and that’s saying a lot). Ms. Robbie has true star potential, but the script hangs her out a few times. She will be seen as Jane in next year’s Tarzan movie, so add that to your must-see list.

A very smart person I know observed that Will Smith has been conning us for years, and maybe by taking this role, at least he is finally admitting it. It is a bit tiresome to see Mr. Smith consistently play the smartest guy in the room, the most charming guy in the room, and the sneakiest guy in the room. It seems maybe he is one of the few that still sees him as such. The best actors elevate their co-stars and the script, while it seems he believes his star power is all that’s required.

Greetings again from the darkness. From the opening scene it is clear we aren’t in for a typically lame rom-com with caricatures instead of characters and punchlines instead of feelings. Instead, this one is all about the characters and their feelings … realistic feelings of pain, anger, hope and frustration. Now don’t misunderstand. It doesn’t go too deep and there is still plenty of humor in the moments.

Cal (Steve Carell) and Emily (Julianne Moore) are sharing one of their many restaurant moments over the course of their long, steady marriage. Only

this time, something spoils the comfort zone. Emily says she wants a divorce and later tells Cal that she had an affair with a co-worker (Kevin Bacon). What follows is as close to real life reactions as we could ever hope for in a rom-com. Cal is hurt. The kids are angry. Emily is confused. Their friends take sides.

After moving out, Cal heads to a local upscale lounge that seems to be stocked with gorgeous women and only a handful of men … every night. In real life, the line of men waiting to enter would be wrapped around the block. Still, one of the regulars is Jacob, played by Ryan Gosling. He is a thing of beauty himself, and always quick with just the right line. His science is making women believe he cares about nothing but them. Cal is discouraged by Jacob’s incredible success rate. Jacob notices Cal’s negative vibe and agrees to train him. But first, the makeover … wardrobe, haircut and conversation skills.

The polar opposite effect of what you might expect from Hollywood – these nice people begin to question their direction. Cal longs for Emily. Emily still thinks about Cal, but dates her co-worker. The son (Jonah Bobo) has a crush on the older baby-sitter, who has a crush of her own. Even Jacob falls hard for new attorney Hannah (Emma Stone) who has just walked out on her wet rag boyfriend (Josh Groban) who offered her a job, rather than a ring. Oh what a tangled web we weave. And that’s just the stuff I can tell you!

Cal’s first conquest utilizing his newly learned skills is a teacher played with full energy by the terrific Marisa Tomei. She only has a couple of scenes, but as usual, Ms. Tomei makes the most of her screen time. The high school baby sitter is played well by Analeigh Tipton, but it’s interesting to note (in real life) she is 3 days younger than law school grad Hannah (Stone).

All of the actors are top notch here. Steve Carell continues to get better … this is a superior movie to Date Night (with Tina Fey). Julianne Moore is solid, though her character is mostly mopey. Ryan Gosling and Emma Stone are both outstanding. Gosling is known for mostly offbeat, dark independent films but shows again how easily he slides back into sex symbol. Ms. Stone is headed for super-stardom. She was really good in Easy A and has a star-making turn in the upcoming film The Help. After that, it’s on to the new Spider-Man for her.

Glenn Ficarra and John Requa are the co-directors and were responsible for the much less mainstream I Love You Phillip Morris, with Jim Carrey and Ewan McGregor. Surprisingly the film was written by Dan Fogelman, who is known for his script writing on the animated Cars movies.

Chances are good that more women will want to see the movie, but the surprise is, many men will relate to what’s going on with the Steve Carell and Ryan Gosling characters. There is enough humor to keep everyone happy and enough strong writing to say this is a very good movie.

SEE THIS MOVIE IF: it’s date night and you are looking for a good comedy/drama made for adults

SKIP THIS MOVIE IF: you find it difficult to find any humor in watching a couple struggle through a divorce, no matter how well made it is.

Greetings again from the darkness. The real story of Steven Russell is downright fascinating. He is the ultimate con man and has been nicknamed “King Con”. A master of reading people, gaining trust and manipulating many systems, Russell was proved to have stolen from a major food service corporation and a major healthcare organization. Stolen, as in hundreds of thousands of dollars. The smaller cons are too numerous to count. And don’t forget his string of jail/prison escapes!

Glenn Ficarra and John Regua (the writing team behind Bad Santa) co-direct this story based on Steve McVicer’s book on Russell. Somehow they have delivered a hokey, boring film despite the man at the center of the story. Luckily for them, Jim Carrey drums up a terrific performance as Russell and provides some relief from the amateurish script and direction.

The role of Phillip Morris is tackled by Ewan McGregor in a manner we have not previously seen from him. His effeminate naivety offers a nice contrast to the domineering Russell/Carrey. The support work is minimal but provided by the very capable Rodrigo Santoro and the very talented (but totally wasted here) Leslie Mann.

The film shows us the beginning of the fall for Russell. His parents tell him he was adopted and he responds by tracking down his birth mother. He pretty much falls apart after that meeting and commences with his endless stream of cons. Is he a happily married man or is he gay? Is he a brilliant strategist or an embezzler? His life changes during one of his trips to jail. He meets Phillip Morris. Their life together is full of excess, thanks to Russell’s latest scam. As always, the con is exposed and Russell spends his entire life alternating between being on the lam or in jail.

I found the film inferior to Catch Me if You Can, a better (not great) film about another real life con man, Frank Abignale. The cat and mouse chases of that film held my interest. This film has little drama despite the obvious talents of this off-center man. My guess is that in the hands of better filmmakers, this could have been a much improved film.

Apparently, Russell’s biggest con was played on himself. He never really figured out who he is. He is now serving a life sentence in near-solitary confinement in prison. Mr. McVicker, the book’s author, has stated two very telling observations. First, he suspects Phillip Morris was not quite as innocent as he would have us believe. Second, his description of Russell as a man “who makes you want to believe” tells you all you need know about this ultimate con man.

SEE THIS MOVIE IF: You still need proof that Jim Carrey is a real actor and not just a goofy side show OR the Enron scandal just wasn’t quite funny enough for you

SKIP THIS MOVIE IF: You have read the book OR don’t find much humor in con men