Greetings again from the darkness. Clea DuVall: Actress/Writer/Director/Producer. No one who has followed her outstanding career (especially as a standout in many independent films) can be surprised that she is spreading her creative wings into all aspects of filmmaking. Her directorial debut can best be described as a contemporary version of Lawrence Kasdan’s The Big Chill (1983) for today’s thirty-somethings.

Casting is key for an ensemble project, and it’s especially difficult for a serio-comedy exploring the insecurities and inherent unhappiness that corresponds to the closest relationships. The premise here is that four couples meet at a beautiful and isolated lake house just outside of Savannah. The motivation for this meet up of old friends is a “marriage intervention” for one of the couples … something that must have seemed better in theory than it plays out in reality.

The couple whose marriage is in the target zone is played by Cobie Smulders (The Avengers, “How I Met Your Mother”) as exhausted mother of three Ruby, and Vincent Piazza (“Boardwalk Empire”) as the long-ago-gave-up-trying Peter. The others are played by Melanie Lynskey (“Two and a Half Men”) as Annie, who has continually postponed her wedding to super nice guy fiancé Matt played by Jason Ritter; Natasha Lyonne (“Orange is the New Black”) as Sarah, long-time partner to Ruby’s sister Jessie (Clea DuVall); and Ben Schwartz (“House of Lies”) as Jack, who brings his free-spirited, much younger girlfriend Lola (Alia Shawkat, State of Grace).

We quickly witness the bitterness and lack of caring that has poisoned the marriage of Ruby and Peter, and of course, it doesn’t take long to spot all the cracks in the relationships and personalities of the others. Annie is a control-freak who appears to be a full blown alcoholic, while Matt is such a nice guy, that he refuses to stand up for himself and have some pride. Sarah and Jessie avoid any serious discussion regarding why they aren’t living together yet, while Jessie’s weakness for younger girls plays a role – as does Sarah’s secret. Jack is obviously avoiding dealing with some personal issue (which we later learn) as he plays kissie-face with the no-strings-attached Lola (not Lolita).

The script tries to tackle an enormous number of issues, sub-plots and characters, and while we pretty easily get a feel for each, we never understand how these people ever agreed that a group attack was the best strategy. No amount of charades, barbeque or kickball can hide the messes that define each of these folks … whether married or not.

The actors have tremendous comedy timing and handle these moments much better than the ultra-dramatic moments. Cobie Smulders and Ben Schwartz are real standouts here, which is quite a compliment given the tremendous on screen talents on display. It’s a group that can gracefully pull off a Subaru joke while also playing cut-throat charades and dodging thrown peaches.

Ms. DuVall will undoubtedly go on to make better films than this one, but as a first project it offers some terrific moments. Sara Quinn (of Tegan and Sara) scores the film, and though some excellent tunes are included, the music was at times disruptive to the flow of the story. The film will probably hit home with a great many who fall into the thirty-something age group, though older viewers will likely prefer to re-visit The Big Chill from more than 30 years ago. 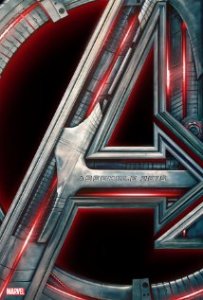 Greetings again from the darkness. Joss Whedon returns as writer/director for the sequel to his 2012 blockbuster The Avengers, and this time he juggles an exceptionally large, diverse and talented group of characters and actors who are not only involved in good versus evil, but also in the battle for screen time.

There is no shortage of write-ups from film critics and fanboys who have analyzed every aspect of the movie from every possible angle, and while I admit to taking that same approach to most movies, there is something about the Marvel franchise that cause me to flip off the film critic part of my brain and just sit back and enjoy. And enjoy I do. The characters are fun and interesting and the action is at times breath-taking.

Since there are, by my count, at least 23 actors who deserve mention, it makes little sense for me to list them here. It is worth noting that the key actors all reprise their roles as Avengers, and many of those in supporting roles are back as well. This time there are also many significant newcomers, and those include “The Twins” – Aaron Taylor-Johnson as Quicksilver and Elizabeth Olsen as Scarlet Witch. Other newbies include Linda Cardellini (“Mad Men”,” Bloodline”) as Hawkeye’s wife, Claudia Kim as Dr Helen Cho, Thomas Kretschmann as Strucker, and Andy Serkis as Ulysses Klaue. Though each is a nice addition, it’s the stellar voice work of James Spader as Ultron that really makes this movie click. Somehow Mr. Spader manages to convey a powerful presence despite maintaining a (mostly) even keel throughout. It’s masterful voice acting.

Missing this time out are Pepper Potts and Loki, though we hardly notice thanks to the first look at Vision (Paul Bettany) and Thanos (Josh Brolin) … plus the unveiling of Iron Man’s Hulkbuster armor. If you thought the first Avengers movie made it difficult to keep up with the characters, this one will have your head spinning. It’s probably the only quibble I have with it … character overload at the expense of character development. The Hawkeye family farm represents a meager attempt to have this group of superheroes set in a “normal” environment, but it just doesn’t quite work. The Avengers are at their best while snipping at each other or saving the planet … fortunately the movie offers plenty of the latter.

Greetings again from the darkness. Many were unimpressed with the first Captain America movie, though I have always had a soft spot for the most heroic and genuinely pure of the superheroes. This sequel opens with Steve Rogers trying to acclimate after a 70 year sleep … he thinks the internet is pretty cool. It is a bit surprising that the Russo brothers (Anthony and Joe, known for You, Me and Dupree) are the ones who load up on plot lines within a Marvel movie.

Starting off with big time action sequences, the movie then morphs into a geopolitical weave of intrigue between SHIELD and HYDRA. New to this maze of distrust is Robert Redford … proving once again that Hollywood doesn’t trust guys wearing suits in fancy offices. In a twist, Captain America (Chris Evans) and Black Widow (Scarlett Johansson) find themselves the target of a manhunt by those they work for. Then they drag Falcon (Anthony Mackie) into this … his flight suit is a nice effect. All of this happens after an unexpected action-packed sequence featuring Nick Fury (Samuel L Jackson).  The titular Winter Soldier provides an identity twist, as well as some intense fighting.

The multiple plot lines and emphasis on trust issues all correlate pretty well to some of the things going on in the world today. That adds an enjoyable element that really brings relevance to the Captain America character. Because of this, the repartee between Cap and Natasha is limited … we get some, but much less than what we have come to expect from other Avengers-related films. And it’s probably a good idea to go a different direction with the Avenger who really is different from the others. Don’t miss the extra scene in the closing credits … it’s the lead in to Avengers: Age of Ultron movie coming in 2015.

**NOTE: there is the always-anticipated Stan Lee cameo, and it adds the usual touch of humor