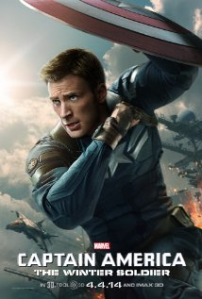 Greetings again from the darkness. Many were unimpressed with the first Captain America movie, though I have always had a soft spot for the most heroic and genuinely pure of the superheroes. This sequel opens with Steve Rogers trying to acclimate after a 70 year sleep … he thinks the internet is pretty cool. It is a bit surprising that the Russo brothers (Anthony and Joe, known for You, Me and Dupree) are the ones who load up on plot lines within a Marvel movie.

Starting off with big time action sequences, the movie then morphs into a geopolitical weave of intrigue between SHIELD and HYDRA. New to this maze of distrust is Robert Redford … proving once again that Hollywood doesn’t trust guys wearing suits in fancy offices. In a twist, Captain America (Chris Evans) and Black Widow (Scarlett Johansson) find themselves the target of a manhunt by those they work for. Then they drag Falcon (Anthony Mackie) into this … his flight suit is a nice effect. All of this happens after an unexpected action-packed sequence featuring Nick Fury (Samuel L Jackson).  The titular Winter Soldier provides an identity twist, as well as some intense fighting.

The multiple plot lines and emphasis on trust issues all correlate pretty well to some of the things going on in the world today. That adds an enjoyable element that really brings relevance to the Captain America character. Because of this, the repartee between Cap and Natasha is limited … we get some, but much less than what we have come to expect from other Avengers-related films. And it’s probably a good idea to go a different direction with the Avenger who really is different from the others. Don’t miss the extra scene in the closing credits … it’s the lead in to Avengers: Age of Ultron movie coming in 2015.

**NOTE: there is the always-anticipated Stan Lee cameo, and it adds the usual touch of humor

This entry was posted on Sunday, April 20th, 2014 at 9:11 pm and is filed under Action. You can follow any responses to this entry through the RSS 2.0 feed. You can leave a response, or trackback from your own site.