Greetings again from the darkness. After two incredible arthouse films that earned the label “visionary filmmaker” for Robert Eggers, some would not have been surprised to find him cashing in on a huge payday for the next colossal superhero movie. But for those of us who adore and respect him for THE WITCH (2015) and THE LIGHTHOUSE (2019), we knew Mr. Eggers was not the comic book type. Instead, he secured a hefty budget (still less than $100 million) and with his co-writer, Icelandic author Sjon (writer of last year’s mesmerizing LAMB), created the most epic Viking movie to date … while firmly maintaining his artsy stylings.

Every now and then a movie comes along and I must accept that my words will fall short; that I won’t be able to do justice to what I’ve experienced on screen. This is certainly one of those times. Based on the same Scandinavian folk tale that inspired Shakespeare to pen “Hamlet”, this Eggers film is not just meticulously researched, it also pulls us right in so that we slosh through the mud and muck. We shiver from the cold. We feel the wind and the brutality of the violence. We live the harsh elements of Viking life.

The film opens in the year 895 AD as young Prince Amleth welcomes home his battle-weary father, King Aurvandil (Ethan Hawke). Not long after jester Heimer the Fool (Willem Dafoe) jokes about the Queen and the King’s brother, the boy witnesses his uncle Fjolnir (Claes Bang, the excellent “Dracula” TV mini-series, 2020) strike dead the king. Amleth escapes, pledging to avenge his father’s murder and the kidnapping of his mother, Queen Gudrun (Oscar winner Nicole Kidman). Flash forward twenty years and Amleth has become a behemoth of a man played by Alexander Skarsgard (Eric Northman in “True Blood”), who lives, fights, and kills alongside violent 10th century Vikings. Amleth is a hulking beast unmatched in battle, yet one who never unnecessarily harms women or children.

His revenge plan leads him to the farming village where his mother and Uncle Fjolnir now live as wife and husband, an arrangement Amleth is certain she adheres to for her own safety and that of her new son. Bjork, in her first big screen role since DANCER IN THE DARK (2000), appears as the seeress who knows Amleth’s destiny. It’s here where Amleth meets Olga “of the Birch Forest” (Anya Taylor-Joy) and reveals his plan to her. Olga describes her supernatural abilities as breaking men’s minds in contrast to his breaking their bones. The two are quite the match.

Eggers stages a stunning final showdown with a naked sword fight atop a burning volcano to ensure we aren’t subjected to an ending that falls short. The visceral savagery on the screen is somehow both brutal and beautiful. This is epic cinematic brilliance from Eggers and cinematographer Jarin Blaschke, who treat us to numerous long takes in harsh weather and discomforting action. This is 136 minutes featuring some of cinemas best faces, while also proving that visionary is simply not a strong enough word to describe director Robert Eggers.

Greetings again from the darkness. The world famous Villa Tugendhat is a physical, emotional, and visual metaphor for the collapse of the Czech Republic in this film from director Julius Sevcik (LOST GIRLS AND LOVE HOTELS, 2020). Writer Andrew Shaw (VOICE FROM THE STONE, 2017) adapted the script from Simon Mawer’s 2009 best-selling book, “The Glass Room”. The family melodrama is fictionalized, but the house itself is the character around which everything else revolves. And what a house it is.

Viktor (Claes Bang, TV mini-series “Dracula”, and THE LAST VERMEER, 2020) commissions noted architect Von Abt (Karel Roden) to build a home for Viktor’s new bride, Liesel (Hanna Alstrom, the KINGSMAN movies). Liesel works closely with the architect to create a modern masterpiece that is the envy of their Czechia town of Brno. The heart of the stunning structure is a glass room, causing Abt to ask Liesel, “Are you ready to live in the light?” Liesel’s close friend Hana (Carice Van Houten, LOST GIRLS AND LOVE HOTELS, 2020), who wishes they were even closer, spends a great deal of time visiting at the home. Liesel’s bliss is shaken when she discovers Viktor is having an affair with their nanny, Kata (Alexandra Borbely, ON BODY AND SOUL, 2017).

If she thought that was the worst thing that could happen, Liesel soon finds things much worse. She and her Jewish husband escape to Zurich just as the Nazi occupation occurs. Hana and her Jewish husband are not so fortunate, and not only is she separated from her lifelong friend, she is forced to do what she must to protect her husband, and that includes an affair with a German contractor named Stahl (Roland Moller, THE LAST VERMEER, 2020). It seems all of our characters are doing what they must, and they all seem to be thinking of someone other than the one they are with.

The second half of the film is much stronger than the first, as real tension exits. Ms. Van Houten is superb in her performance as Hana, and she carries this part of the story. It’s through her eyes that we see the transformations of Liesel’s beautiful home. The symmetry with what’s happening in the country is unmistakable, and Hana is at the heart of the film’s message … love endures and overcomes. The issue with the film is that we never really connect with any character but Hana. Viktor and Liesel are out of sight for an extended period of time, leaving us with what is a great idea for a film – but one that lacks the necessary depth.

Regardless of that, it’s a gorgeous film to watch … thanks in no small part to the work of cinematographer Martin Strba. The film stretches from the early 1930’s to the late 1960’s and the production design is spot on. Some interesting notes include Villa Tugendhat was actually designed by German architects Ludwig Mies van der Rohe and Lilly Reich, and the Tugendhat family did actually flee the home. German plane designer Willy Messerschmitt actually lived in the house while it was being used as a design studio, much like the character Stahl in the film. It’s a shame the script doesn’t do justice to the cast and the home, but this one falls short of being a must see. 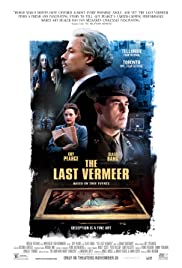 Greetings again from the darkness. Knowing the film is based on Jonathan Lopez’s 2008 book, “The Man Who Made Vermeers” removes some of the mystique from the story; however Dan Friedkin’s (stunt pilot on DUNKIRK) directorial debut is an enticing look at a blending of art history and world history. The screenplay was co-written by John Orloff, Mark Fergus, and Hawk Ostby.

It’s May 29, 1945, three weeks after the fall of Hitler’s Reich, and the Dutch military is on a mission to reclaim valuable art and collectibles confiscated by the Nazis during the war. Some of these were hidden in Austrian salt mines by order of Hermann Goring, actions also depicted in the 2014 film, THE MONUMENTS MEN. After serving in the war, Captain Joseph Piller (Claes Bang, “Dracula” 2020) is tasked with tracking down those who stole the art, and those who sold the art to Germans. It’s a task meant to preserve his country’s culture. One particular piece, “Christ with the Adulteress” held special significance, as it was billed as ‘the last Vermeer’, a long lost painting by Dutch master Johannes Vermeer (“The Girl with the Pearl Earring”), for which Goring had paid a record price.

Investigation on this painting led Piller and his assistant Minna (Vicky Krieps, PHANTOM THREAD 2017) to Han Van Meegeren (played with panache by Guy Pearce and his stylish eyebrows). Piller is also helped by his friend Esper Vesser (Roland Moller, ATOMIC BLONDE 2017) who supplies a bit of muscle and brawn. Van Meegeren has a fancy manner of speech, and Piller determines he’s the key to the case, and to unlocking what occurred and how. At the same time, the Ministry of Justice (August Diehl, INGLORIOUS BASTERDS 2009) is after Van Meegeren for conspiracy, and the parties end up in court.

Piller and Van Meegeren existed in real life, and though some dramatic license is taken, much of what we see actually happened. Art experts and politics collided. And it’s not surprising that egos ruled the day (not unlike today). The twist may or may not be a shocker to those who know the story, but it’s still fascinating that folks would risk their lives in such a manner during the darkest of times. It seems opportunists exist regardless of the era. Mr. Bang and Mr. Pearce are both excellent here, and it’s quite fun to watch their verbal wranglings. Director Friedkin adds an Epilogue that will surely bring a smile to most viewers.