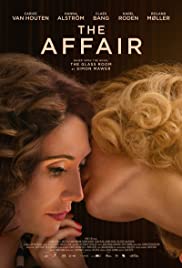 Greetings again from the darkness. The world famous Villa Tugendhat is a physical, emotional, and visual metaphor for the collapse of the Czech Republic in this film from director Julius Sevcik (LOST GIRLS AND LOVE HOTELS, 2020). Writer Andrew Shaw (VOICE FROM THE STONE, 2017) adapted the script from Simon Mawer’s 2009 best-selling book, “The Glass Room”. The family melodrama is fictionalized, but the house itself is the character around which everything else revolves. And what a house it is.

Viktor (Claes Bang, TV mini-series “Dracula”, and THE LAST VERMEER, 2020) commissions noted architect Von Abt (Karel Roden) to build a home for Viktor’s new bride, Liesel (Hanna Alstrom, the KINGSMAN movies). Liesel works closely with the architect to create a modern masterpiece that is the envy of their Czechia town of Brno. The heart of the stunning structure is a glass room, causing Abt to ask Liesel, “Are you ready to live in the light?” Liesel’s close friend Hana (Carice Van Houten, LOST GIRLS AND LOVE HOTELS, 2020), who wishes they were even closer, spends a great deal of time visiting at the home. Liesel’s bliss is shaken when she discovers Viktor is having an affair with their nanny, Kata (Alexandra Borbely, ON BODY AND SOUL, 2017).

If she thought that was the worst thing that could happen, Liesel soon finds things much worse. She and her Jewish husband escape to Zurich just as the Nazi occupation occurs. Hana and her Jewish husband are not so fortunate, and not only is she separated from her lifelong friend, she is forced to do what she must to protect her husband, and that includes an affair with a German contractor named Stahl (Roland Moller, THE LAST VERMEER, 2020). It seems all of our characters are doing what they must, and they all seem to be thinking of someone other than the one they are with.

The second half of the film is much stronger than the first, as real tension exits. Ms. Van Houten is superb in her performance as Hana, and she carries this part of the story. It’s through her eyes that we see the transformations of Liesel’s beautiful home. The symmetry with what’s happening in the country is unmistakable, and Hana is at the heart of the film’s message … love endures and overcomes. The issue with the film is that we never really connect with any character but Hana. Viktor and Liesel are out of sight for an extended period of time, leaving us with what is a great idea for a film – but one that lacks the necessary depth.

Regardless of that, it’s a gorgeous film to watch … thanks in no small part to the work of cinematographer Martin Strba. The film stretches from the early 1930’s to the late 1960’s and the production design is spot on. Some interesting notes include Villa Tugendhat was actually designed by German architects Ludwig Mies van der Rohe and Lilly Reich, and the Tugendhat family did actually flee the home. German plane designer Willy Messerschmitt actually lived in the house while it was being used as a design studio, much like the character Stahl in the film. It’s a shame the script doesn’t do justice to the cast and the home, but this one falls short of being a must see.

This entry was posted on Wednesday, March 3rd, 2021 at 10:46 pm and is filed under Drama, World Cinema/Foreign. You can follow any responses to this entry through the RSS 2.0 feed. You can leave a response, or trackback from your own site.