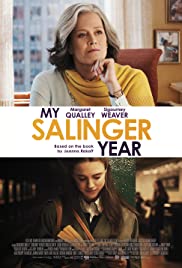 Greetings again from the darkness. There is no shortage of famous reclusive writers. Harper Lee, Thomas Pynchon, and even Edgar Allan Poe surely earned the label. Yet, thanks to his book “The Catcher in the Rye”, J.D. Salinger remains the most mysterious of them all. First published in 1951, ‘Catcher’ has long appealed to angsty teenagers caught up in the excitement of relating to Holden Caulfield’s rebellion, and construed from this is that author Salinger must be the only one who understands them.

Filmmaker Phillippe Falardeau (THE GOOD LIE, 2014) has adapted the 2014 memoir of Joanna Smith Rakoff, who recounted her time working for the New York literary agency that represented Salinger. Set in the mid-90s, the film centers on Joanna (played by Margaret Qualley, ONCE UPON A TIME … IN HOLLYWOOD, 2019), as she leaves school and a boyfriend behind in California to pursue writing in the Big Apple, because, as she states in her opening monologue, “It’s what I want.”

The dream of writing and the reality of earning a living come crashing down on Joanna as she secures a job as a secretary under Margaret (3 time Oscar nominee Sigourney Weaver), who is protective of her most secretive client, J.D. Salinger, whom she refers to as “Jerry”. Margaret and the agency are “old school” and use only typewriters since she believes computers only create more work. Joanna’s job description is this: read the piles of Salinger fan letters that arrive, ensure there is no threat of violence, categorize said letter, send the appropriate form letter response, and shred the original. Rinse and repeat hundreds of times.

Though she has little time to write, Joanna finds a boyfriend in Don (Douglas Booth, PRIDE AND PREJUDICE AND ZOMBIES, 2016), a selfish guy working on his own novel. We see Joanna at home with Don and at work with Margaret, Jerry’s fan mail, and co-workers Hugh and Daniel, played by veteran character actors Bryan F O’Byrne and Colm Feore, respectively. The obsessive fan letters start to get to Joanna, and she breaks protocol by sending a personal reply to one. One writer in particular, played by Theodore Pellerin (“On Becoming a God in Central Florida”) becomes an illusion that Joanna’s mind brings into real moments of her life. This happens between her phone conversations with Salinger (played with effective elusiveness by Tim Post).

Similarities to THE DEVIL WEARS PRADA creep in occasionally, but it’s how likable Margaret Qualley is that keeps us interested, despite us knowing almost nothing about her writing abilities. We only know she’s written a couple of poems and red-lined Don’s first novel. She proclaims she wants to be “extraordinary”, but after seeing the effects of success on Salinger, we can’t help but wonder why she hasn’t adjusted that goal a bit. The iconic photograph of J.D. Salinger hangs on the wall by Joanna’s desk, and though he died in 2010, his work still impacts readers some 70 years after being published. This film isn’t quite so memorable, but it’s easy enough to watch.

This entry was posted on Thursday, March 4th, 2021 at 7:24 pm and is filed under Drama. You can follow any responses to this entry through the RSS 2.0 feed. You can leave a response, or trackback from your own site.