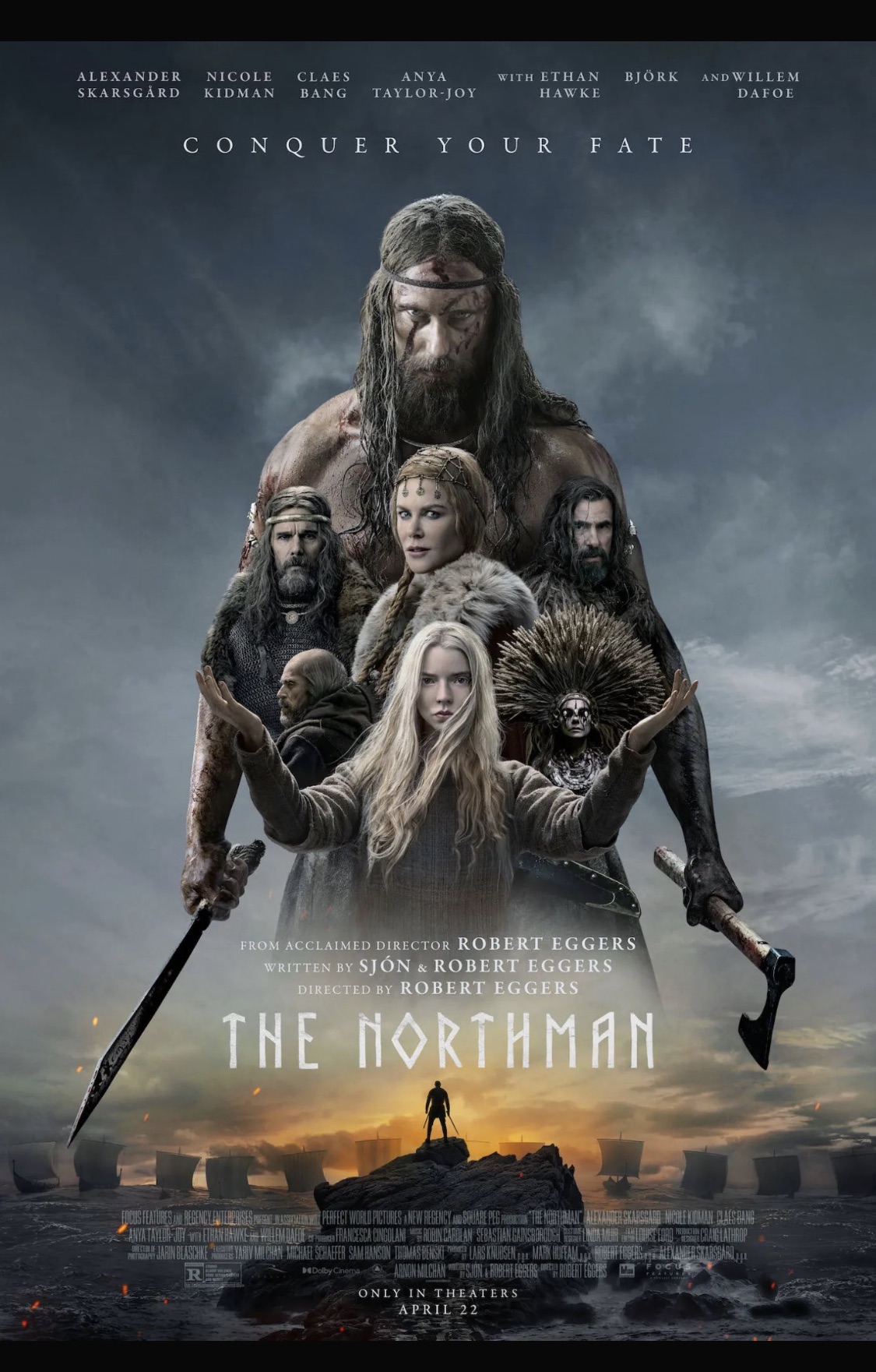 Greetings again from the darkness. After two incredible arthouse films that earned the label “visionary filmmaker” for Robert Eggers, some would not have been surprised to find him cashing in on a huge payday for the next colossal superhero movie. But for those of us who adore and respect him for THE WITCH (2015) and THE LIGHTHOUSE (2019), we knew Mr. Eggers was not the comic book type. Instead, he secured a hefty budget (still less than $100 million) and with his co-writer, Icelandic author Sjon (writer of last year’s mesmerizing LAMB), created the most epic Viking movie to date … while firmly maintaining his artsy stylings.

Every now and then a movie comes along and I must accept that my words will fall short; that I won’t be able to do justice to what I’ve experienced on screen. This is certainly one of those times. Based on the same Scandinavian folk tale that inspired Shakespeare to pen “Hamlet”, this Eggers film is not just meticulously researched, it also pulls us right in so that we slosh through the mud and muck. We shiver from the cold. We feel the wind and the brutality of the violence. We live the harsh elements of Viking life.

The film opens in the year 895 AD as young Prince Amleth welcomes home his battle-weary father, King Aurvandil (Ethan Hawke). Not long after jester Heimer the Fool (Willem Dafoe) jokes about the Queen and the King’s brother, the boy witnesses his uncle Fjolnir (Claes Bang, the excellent “Dracula” TV mini-series, 2020) strike dead the king. Amleth escapes, pledging to avenge his father’s murder and the kidnapping of his mother, Queen Gudrun (Oscar winner Nicole Kidman). Flash forward twenty years and Amleth has become a behemoth of a man played by Alexander Skarsgard (Eric Northman in “True Blood”), who lives, fights, and kills alongside violent 10th century Vikings. Amleth is a hulking beast unmatched in battle, yet one who never unnecessarily harms women or children.

His revenge plan leads him to the farming village where his mother and Uncle Fjolnir now live as wife and husband, an arrangement Amleth is certain she adheres to for her own safety and that of her new son. Bjork, in her first big screen role since DANCER IN THE DARK (2000), appears as the seeress who knows Amleth’s destiny. It’s here where Amleth meets Olga “of the Birch Forest” (Anya Taylor-Joy) and reveals his plan to her. Olga describes her supernatural abilities as breaking men’s minds in contrast to his breaking their bones. The two are quite the match.

Eggers stages a stunning final showdown with a naked sword fight atop a burning volcano to ensure we aren’t subjected to an ending that falls short. The visceral savagery on the screen is somehow both brutal and beautiful. This is epic cinematic brilliance from Eggers and cinematographer Jarin Blaschke, who treat us to numerous long takes in harsh weather and discomforting action. This is 136 minutes featuring some of cinemas best faces, while also proving that visionary is simply not a strong enough word to describe director Robert Eggers.

This entry was posted on Thursday, April 21st, 2022 at 6:30 pm and is filed under Action, Thriller. You can follow any responses to this entry through the RSS 2.0 feed. You can leave a response, or trackback from your own site.