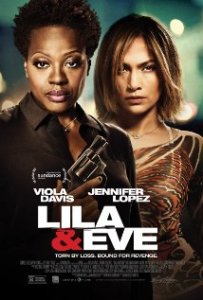 Greetings again from the darkness. It’s the era of angry cinematic women, and this time we get Viola Davis and Jennifer Lopez as mothers who go on a rampage of violence to gain vengeance for the murders of their sons. In 1991 Thelma & Louise tried to teach abusive and pig-headed men a lesson, and now Lila & Eve face off against neighborhood gangbangers.

Director Charles Stone III is best known for Drumline (2002) and Mr 3000 (2004) and this high-stress thriller seems a departure for him, though he compensates with a talented cast. In addition to Ms. Davis and Ms. Lopez, we get detectives played by Shea Whigham and Andre Royo, and Michole Briana White as the leader of the support group.

Stories of vigilantism always skirt the line between gritty and far-fetched, and unfortunately this one leans a bit too far the wrong way. Watching these two women so easily track down their targets and then so effortlessly ‘take care of business’ is head-shaking when combined with the tricky plot twist. The side story focusing on the support group was actually the most interesting, as it provides a glimpse of the grieving process and psychological effects experienced by mothers of murdered sons. Even this part flies off the rails towards the end of the movie – though it was with the best intentions.

Jennifer Lopez at least seems to take some delight in her character … a role much less restrictive than that of Viola Davis, who is forced to play it straight and angry (and she is very adept at this). Mothers seeking vengeance is a cause I can support, but not more can be said about this film as the first rule of Fight Club …