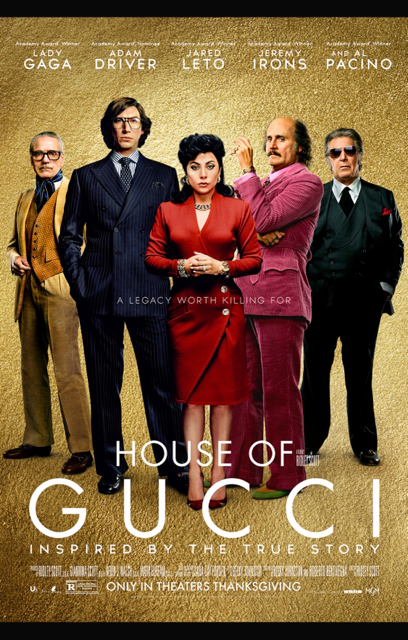 Greetings again from the darkness. I’ve never purchased or owned anything Gucci, but that didn’t prevent me from enjoying the heck out of Ridley Scott’s film that brings the longest, most expensive and dangerous real life episode of ‘Family Feud’ to the big screen. It’s co-written by Becky Johnston and Roberto Bentivegna, and is based on the 2001 book, “House of Gucci: A Sensational Story of Murder, Madness, Glamour, and Greed” by Sara Gay Forden. Brace yourself for a (mostly) true wild ride, and for what is likely to be one of the year’s most divisive films – plenty of love and hate (just like the actual story).

What happens when a brand is so closely associated with a family name? The arguments begin on who ‘deserves’ to be a Gucci, who is a ‘real’ Gucci, and who should make the decisions that impact the Gucci family and business wealth and reputation. During the extended run time (2 hours, 37 minutes), we see many of the iconic Gucci items: the Flora scarf, the moccasins, the bamboo bag, and the watches. And though high fashion is always present, director Scott has delivered a spectacle of romance, family riffs, extravagance, greed, power, betrayal, revenge, and crime.

Lady Gaga (Oscar winner, A STAR IS BORN, 2018) stars as Patrizia, the newest Gucci. Hers is not blind ambition, but rather calculated and laser-focused. That she implodes a dysfunctional family is only a portion of the story. After marrying Maurizio Gucci (Adam Driver), Patrizia immediately begins manipulating her husband into reconciling with his family and taking on an active role in a business for which he previously had little interest. This is simply step two (the first was marriage) in her grand scheme to control the business and the money. Maurizio’s father Rodolfo (Oscar winner Jeremy Irons, REVERSAL OF FORTUNE, 1990) is ailing, so it’s Uncle Aldo (Oscar winner Al Pacino, SCENT OF A WOMAN, 1992) to whom Patrizia directs her attention. She plays it like a chess match – only this is more entertaining to watch unfold.

Also in the picture is Paolo Gucci (a truly unrecognizable Jared Leto, Oscar winner, DALLAS BUYERS CLUB), Aldo’s son, and a family outcast. Paolo is a wildly creative individual who tends to his pet pigeons and tries desperately to find his place in the family. Jack Huston plays Dominico De Sole, Rodolfo’s consigliere and the family attorney. Each of the characters is given their time in the spotlight, including a terrific breakfast scene with Pacino and Irons. Of course this is mostly Patrizia’s story, so it’s Lady Gaga’s performance that will attract much of the attention and commentary. I found her mesmerizing and twisted fun to watch as she proceeded with backstabbing and trickery. Driver’s quietly intense approach makes the perfect contrast to hers.

If you are familiar with the story, you know that Maurizio does eventually run the company, and he also tires of Patrizia’s family-crushing antics … which send him back into the arms of Paola Franchi (Camile Cottin, STILLWATER, 2021). This turns the campy and juicy melodrama factor up to 11 (on the Spinal Tap scale). Patrizia’s frequent trips to fortune teller and TV psychic Pina Auriemma (Salma Hayek) cause a massive tonal shift in the film, leading to the well-documented conclusion. If all this isn’t strange enough, Ms. Hayek is the real-life spouse of the CEO of Gucci’s present-day parent company, Kering. Reeve Carney (“Penny Dreadful”) has a small, yet vital role as up-and-coming fashion designer Tom Ford.

In this movie, it’s easy to describe some performances as hammy or over-the-top, but that’s likely to only hold as a first reaction. Leto’s characterization of Paolo sticks out so much from the others … but he was known as eccentric, and at best, was patronized by the family. It seems highly likely that his personality and approach stood in stark contrast to the old-school style of his father Aldo, or the more staid personalities of his Uncle Rodolfo and cousin Maurizio. Lady Gaga as Patrizia is cunning and shrewd in her calculated approach to re-structure the family and the business. She plays whatever games she must to get where she wants to be. I found her first half performance to be truly outstanding. Pacino is the actor who has trademarked hammy performances over the years, yet here, he fully grasps his role and character, and is a delight to watch.

Much of this is documented by history, though the Gucci family claims not all is or was how it seems. Whether the boost in counterfeiting/knock-offs went down in the 70’s and 80’s as it’s portrayed here, might be an area worth researching, but this is much less a case study in business principles as it is one in family dynamics. I’ll certainly understand those who argue against the story structure here, but the entertainment value proved to be enough for me. As the Gucci tagline goes, “Quality is remembered long after price is forgotten”, but the backstabbing and disloyalty is never forgotten – despite providing great theater (and fashion).

This entry was posted on Monday, November 22nd, 2021 at 6:30 pm and is filed under Drama. You can follow any responses to this entry through the RSS 2.0 feed. You can leave a response, or trackback from your own site.