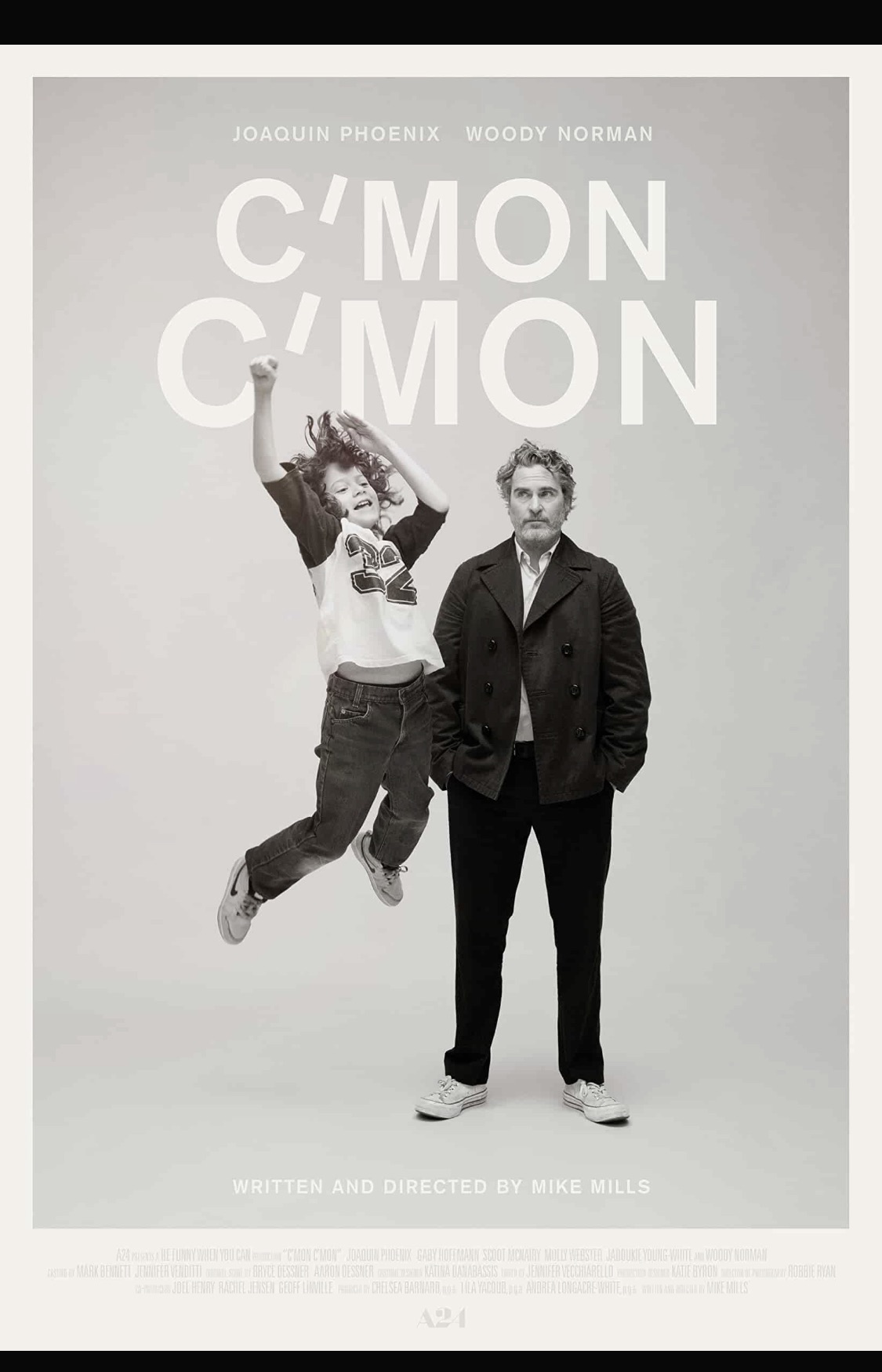 Greetings again from the darkness. Not all filmmakers have something to say about human beings and human nature, but writer-director Mike Mills does … and he continues to prove it. His three previous feature films are all excellent. 20th CENTURY WOMEN (2016) was based on his experience being raised by his mother, while BEGINNERS (2010) was a tribute to his father. THUMBSUCKER (2005) focused on teen angst, and his latest is inspired by interactions with his own son and Mills’ documentary projects.

From the mouths of babes. Early on, we watch and listen as radio journalist Johnny (Oscar winner Joaquin Phoenix, JOKER, 2019) interviews kids in Detroit to get their opinions on all aspects of life and the world, including their hopes and expectations for the future. This and additional segments and the kids’ responses seem real, not staged, presenting a documentary feel – especially since everything is filmed in Black and White. In a rare phone call with his estranged sister Viv (Gaby Hoffman, who will always be remembered as Ray’s daughter in FIELD OF DREAMS, 1989), Johnny offers to take care of Viv’s 9 year old son, Jesse (Woody Norman), while Viv assists Jesse’s father, Paul (Scoot McNairy), who battles ongoing mental health issues.

Viv is reticent to leave Jesse with Uncle Johnny, an unmarried man with no kids of his own. But she’s desperate for the help. Most of the film revolves around Johnny and Jesse spending time together and getting to know each other. Circumstances take the story from Detroit to New York City to Los Angeles to New York City to New Orleans. It’s a terrific journey that lacks any jaw-dropping cinematic elements. These two aren’t mountain climbing or spelunking. They simply walk and talk. This allows Jesse to experience a father-figure that’s been lacking in his life. For Johnny, he gains a perspective on parenting, which contrasts with his professional work interviewing kids. Jesse is whip smart and funny, but also manipulative and confused and downright quirky. The two of them together is quite something to watch as their relationship develops.

Viv shows up mostly in phone calls with Johnny and Jesse, but flashbacks help us understand the emotional break that occurred between she and Johnny. As the two siblings mend their relationship despite the distance, Mills and cinematographer Robbie Ryan effectively use the black and white palette to negate the excitement of big cities and travel, so that we focus on the personal interactions of the characters. The photography may be beautiful to look at, but it also reminds us that to a kid, a city is a city is a city, and what matters is an emotional bond and sense of security.

Young Woody Norman is a revelation as Jesse. He perfectly portrays a normal kid with normal issues in a grown up world. Gaby Hoffman doesn’t have as many scenes as we’d like, but we certainly wish she would work more frequently. As for Joaquin Phoenix, it’s a welcome change of pace and tone after JOKER. He plays a man learning to deal with his own vulnerabilities, and he really gets to show off his extraordinary acting talent. The script is filled with psychology and philosophy, but in a grounded manner – ways we recognize from our own lives. It’s a reflective film that shows the balance of trying to protect kids and shield them from some adult stuff, while also allowing them to explore and find themselves. The impact of adults on kids and the impact of kids on adults is on full display, but it’s also just a couple of guys getting to know each other. And that’s pretty special to watch.

The film had a limited opening on November 19, and expands to more cities and theaters on November 24, 2021

This entry was posted on Wednesday, November 24th, 2021 at 9:10 am and is filed under Drama. You can follow any responses to this entry through the RSS 2.0 feed. You can leave a response, or trackback from your own site.