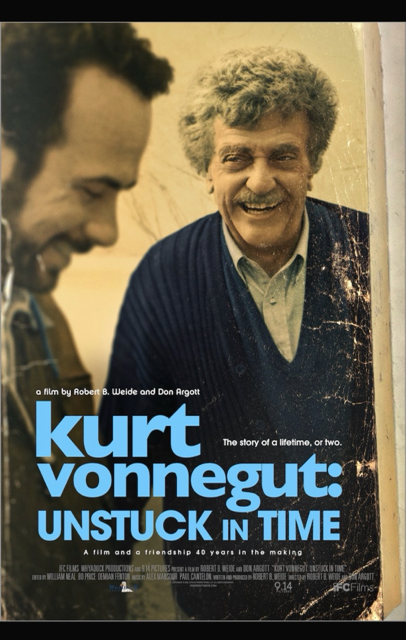 Greetings again from the darkness. Sometimes the work really does speak for itself. Co-director and long-time Vonnegut friend Robert B Weide even admits the renowned author told him, “anything that is any good of mine is on a printed page”. The strange thing here is that by the time it’s over, we aren’t sure if we’ve watched a documentary on the life of Kurt Vonnegut or one about Weide’s friendship with and respect of the man.

Vonnegut, of course, is one of the great American writers of the 20th Century. Born and raised in Indianapolis, he wrote novels, short stories, and plays, and his work was noted for his clever humor and detail. His big breakthrough came in 1969 when “Slaughterhouse Five” became a best-seller, and his other works include “Cat’s Cradle” (1963) and “Breakfast of Champions” (1973). As we see during the film, his live talks became ‘must-attend’ events due to his brilliance and ability to speak directly (and with caustic wit) about a world that he didn’t always maintain the greatest hope for.

Weide and co-director Don Argott address Vonnegut’s shortcomings as a family man, by allowing his daughters to tell Daddy stories in their own words. What’s clear is that Vonnegut being captured by Germans during WWII at the Battle of the Bulge, and subsequently held at Dresden was a driving force not just in his writing, but in his approach to life. He survived the Allied bombing by taking cover in … you guessed it … a freezer in a slaughterhouse.

Archival footage of Vonnegut and interviews with his daughters and biographers, give us a pretty complete looks at his life. Oddly, it’s Mr. Weide who seems to spend as much time on camera as anyone, leading us to wonder about his focus in what he terms a ’40 year’ project. Possibly the most interesting segment involves the various drafts of Vonnegut’s most popular work (“Slaughterhouse Five” was his 6th novel), and the specific comparisons of the author to lead character Billy Pilgrim. Vonnegut passed away in 2007, and we have little doubt his response to that would be … “So it goes.”

This entry was posted on Friday, November 19th, 2021 at 8:48 pm and is filed under Documentary. You can follow any responses to this entry through the RSS 2.0 feed. You can leave a response, or trackback from your own site.