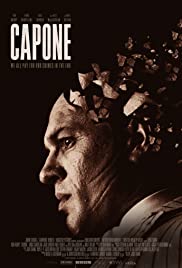 Greetings again from the darkness. I was really hoping for a Josh Trank resurgence. When his FANTASTIC FOUR became one of the worst reviewed movies of 2015, he lost out on a chance to direct a Star Wars film. Given creative control as writer-director-editor, CAPONE was supposed to be his chance bounce back and re-capture the intrigue and promise of his first film, CHRONICLE (2011). And he even chose the fascinating notorious gangster Al Capone as the subject for his comeback. What could go wrong? Well … most everything.

Tom Hardy usually adds enough interest to make any of his projects entertaining to watch, and sometimes he’s downright brilliant. Going back to BRONSON (2008), and on through TINKER TAILOR SOLDIER SPY (2011), WARRIOR (2011), THE DARK KNIGHT RISES (2012), MAD MAX: FURY ROAD (2015), THE REVENANT (2015), and TV’s “Peaky Blinders”, Mr. Hardy has quite a resume of memorable characters – and the above list barely covers half. This time out he plays Al Capone … “Fonse” … don’t dare call him Al “in this house.” He has recently been released from Alcatraz where he was serving his sentence for tax evasion. Confined to his Florida mansion, Capone is only 47 years old, but looks twenty years older thanks to the effects of neurosyphillis-induced dementia. His mind is never clear and his visions take him back to his violent criminal past, or snapshots of his youth (with an ever-present gold balloon).

We can’t really tell if filmmaker Trank meant this as a parody or not. Capone is seen as a mumbling near-zombie, almost always wearing a bathrobe. His eyes are bloodshot, and the once menacing gangster is now a paranoid, saggy diaper-wearing shell who noisily chomps on a cigar (or carrot), fires off his gold-plated Tommy Gun, and has constant issues with vomit-bladder-bowels. Typically a parody offers either slapstick or black comedy, but I only recall a single chuckle … one that occurs when Capone pulls out a shotgun while on a fishing boat with his old mob buddy Johnny (Matt Dillon). Other than that, it’s mostly a bleak look at dementia and the lost power of a man who follows his visions into closets and basements, and jumps up during a movie to sing-a-long with the Cowardly Lion’s “If I Were the King of the Forest.”

The supporting players are given little to work with. The great Linda Cardellini plays Mae, Capone’s supportive wife, while Kyle MacLachlan is his crooked doctor, Noel Fisher is Al junior, Al Sapienza is Capone’s brother Ralphie, and Kathrine Narducci is Ralphie’s wife. There is a secondary plot point involving government surveillance as they attempt to discover the whereabouts of the $10 million Capone supposedly stashed years ago. Of course, Capone doesn’t remember, and when and FBI agent (Jack Lowden, with director Trank in a cameo) interrogates him, he’s unsure whether Capone is acting or actually that far gone. There is also a bit about phone calls from “Tony”, possibly a long-lost Capone son borne from an affair.

The film covers Capone’s final year, and mostly it comes across as a sad and depressing view of dementia. The most obvious statement on Capone’s loss of power, comes in the form of a metaphor, as his beloved “Lady Atlas” garden statue is removed to be sold off. There is also a recurring moment where Capone tunes the radio to a broadcast of the Saint Valentines’ Day Massacre, and family time at Thanksgiving is nothing short of painful to watch. Cinematographer Peter Deming (MULHOLLAND DRIVE, 2001) gives us a well shot film, but despite a couple of David Lynch-type moments, the film mostly lacks entertainment value. I can’t figure out who might want to watch this. Trank seemed to go the deeply artistic route on a subject that’s tough to watch. Maybe he’ll get yet another shot.

This entry was posted on Monday, May 11th, 2020 at 11:48 pm and is filed under Drama. You can follow any responses to this entry through the RSS 2.0 feed. You can leave a response, or trackback from your own site.