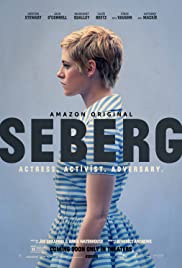 Greetings again from the darkness. “Who is Jean Seberg?” A reporter asks the question to her, just before the movie star’s agent escorts him away as she prepares for publicity shots on PAINT YOUR WAGON, the outlandish 1969 musical-comedy in which she co-starred with Clint Eastwood and Lee Marvin. It’s also a question we expect a film entitled SEBERG to answer, though it never really does. Oh sure, we get the basics: small town girl (Marshalltown, Iowa), Hollywood starlet, activist, target of FBI, and tragic ending. Unwisely, the film tries to cram in too many other pieces of a puzzle – a puzzle plenty interesting on its own.

Kristen Stewart stars as Jean Seberg, the breakout star of the French New Wave Cinema in Jean-Luc Godard’s BREATHLESS (1960). Ms. Stewart brings much more than a short haircut to the role. It’s not a stretch to imagine Ms. Stewart has experienced some of the downside to fame that Ms. Seberg experienced during her career, so it’s no surprise that the moments of torment and frustration and anxiety are the film’s best. Even as a teenager in Iowa, Ms. Seberg showed signs of an activist-in-development. She ran off to Hollywood and was discovered by director Otto Preminger and cast in the lead role for his SAINT JOAN (1957). Seberg actually suffered severe burns during the filming of a key scene – one which is reenacted by Stewart for this film.

Director Benedict Andrews working with a script from Joe Shrapnel (grandson of actress Deborah Kerr) and Anna Waterhouse (they also co-wrote THE AFTERMATH and RACE), focuses mostly on the period of 1968-1971. We see Seberg’s first encounter with Hakim Abdullah Jamal (Anthony Mackie) on a commercial flight, and her follow-up pose with the Black Panthers for a publicity shot on the tarmac. This kicks off an FBI investigation, as well as an affair between Seberg (married to novelist and filmmaker Romain Gary, played by Yvan Attal) and Jamal (married to Dorothy, played by Zazie Beetz). We see how Seberg landed on Hoover’s FBI watch list, and how she was sincerely trying to help what she saw as a worthy cause.

We watch the FBI meticulously build a file on Seberg, albeit illegally under the COINTELPRO (counter-intelligence program) program. Surveillance was used to work towards their goal of running a smear campaign against Seberg due to her support of the Black Panther Party. Jack O’Connell plays FBI Agent Jack Solomon, and Vince Vaughan plays his partner Carl Kowalski. Family dinner time at the Kowalski home is anything but leisurely fun, and it’s an unnecessary scene meant to contrast Kowalski’s character with that of Solomon. It’s here where the film falters. An inordinate amount of time is spent on Agent Solomon and his conscience and his med-student wife Linette (a sinfully underutilized Margaret Qualley).

The film would have been best served by focusing on either Seberg or Solomon. The two stories dilute the effectiveness, and beyond that, the Black Panther story line fades, as does the whole celebrity-as-an-activist subplot. Instead, Seberg’s breakdown and Solomon’s second thoughts share center-stage. The film does succeed in exposing the extremes Hoover’s organization would go to in order to discredit someone whose beliefs might not have meshed with what was deemed proper for the times. What happened to Seberg was a tragedy, and according to Mr. Gary, led to the loss of her career and eventually to her death.

The film bounces from Paris to Los Angeles, and the set decorations and costumes are picture perfect for the era. There are actual Black Panther clips shown, and Ms. Stewart also reenacts a scene from BREATHLESS. Regardless of the script and story issues, Kristen Stewart delivers a terrific performance as Jean Seberg, and keeps our attention the entire time. We like her and feel for her as she slips. The real Ms. Seberg was found dead in a car at age 40, and suicide was suspected, though mystery still surrounds her death to this day. Lastly, just a piece of free advice … if you are looking to do good things in life, having a marital affair is rarely the right first step.

Available on Amazon Prime beginning May 15, 2020

This entry was posted on Friday, May 15th, 2020 at 8:47 am and is filed under Drama. You can follow any responses to this entry through the RSS 2.0 feed. You can leave a response, or trackback from your own site.