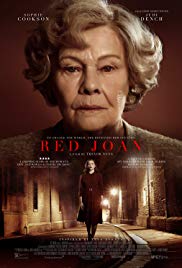 Greetings again from the darkness. Sir Trevor Nunn is a Tony Award winner best known for his stage productions, and for being director of the Royal Shakespeare Company from 1968 through 1986. The film is “inspired by a true story”, and Lindsay Shapero has adapted Jennie Rooney’s 2013 novel, which was a blend of history and fiction taken from the life of Melita Norwood … the longest serving British KGB spy.

Dame Judi Dench plays Joan Stanley (the movie version of the aforementioned Ms. Norwood) whom we first meet as she is being arrested for treason by MI5 agents in May 2000. Most of the film consists of Joan being interrogated while having flashbacks to her earlier life, beginning in 1938 at Cambridge University. She was a hard-working nose-to-the grindstone Physics student who is drawn in to the fascinating world of Sonja (Tereza Srbova) and her brother Leo (Tom Hughes), who are supporters of the Soviet party. In the flashback scenes, young Joan is played by Sophie Cookson (who reminds of a young Faye Dunaway).

The film spends most of its time in flashback mode, and Ms. Cookson excels as the idealistic Joan first in her scenes with Sonja and Leo, and later with Stephen Campbell Moore who plays Professor Max Davies. Joan is recruited to work in the lab with Davies, as the secretly work to create the Atom bomb. It’s Sonja and Leo who coerce Joan into passing along secret documents that allow Stalin’s Russia to keep pace on bomb development. She easily flies under the radar since, as Sonja tells her, “Nobody would suspect us. We are women.”

From a historical perspective, the film kind of falls flat. It also doesn’t qualify as a British spy thriller since there are really no thrills to be found. “The Americans” TV show was infinitely better at the spy genre than this one; however, if the film works on any level, it’s as moral debate fodder. Joan clearly has her reasons for doing what she thought was right … leveling the playing field between super powers, so that none had an advantage. The question is, what is right and who is to decide? During this time, alliances were quite fluid between Russia, Britain and the United States, and she believed her actions saved lives.

Dame Judi is really not on screen much, and when she is, there’s little for her to do except play innocent and dream of years gone by. She was labeled “Granny spy”, and though her story is interesting, and does provide yet another aspect from WWII, the film itself never really grabs us as viewers. The early periods are well filmed with beautiful costumes and sets, but we are never as dumbstruck as Joan’s son (Ben Miles) when he admits he thought his mum was merely an over-educated librarian. As a character study, there’s something here … but as entertainment, it’s a bit lacking.

This entry was posted on Saturday, April 20th, 2019 at 1:17 pm and is filed under Drama. You can follow any responses to this entry through the RSS 2.0 feed. You can leave a response, or trackback from your own site.