BE NATURAL: THE UNTOLD STORY OF ALICE GUY-BLACHE (2019, doc) 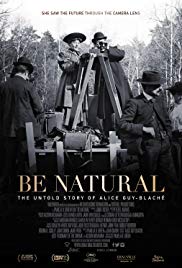 Greetings again from the darkness. History can easily be distorted by those who tell it. But the work and deeds of those who make history stands the test of time, and research can often right a wrong … or at least provide credit where it’s due. Such is the case with Pamela B Greene’s project to uncover the truth, and finally give pioneer filmmaker Alice Guy-Blache her rightful place in the history of cinema.

Numerous familiar faces from the movie industry flash across the screen, and most admit they have never heard of Alice Guy-Blache. Even the few that recognize the name, don’t know her story. This is how the movie starts … letting off the hook those of us who pride ourselves on knowing the basics of cinema’s origins. In 1895, the Lumiere Brothers presented the first short films on their newly developed Cinematographe. In the audience that day were Leon Gaumont and his assistant, Alice Guy.

Young Ms. Guy had a creative vision for this fascinating new technology. Rather than filming “real life”, she would tell stories. And telling stories through moving pictures is exactly what she did more than 1000 times across two decades and two countries. In 1896, she directed THE CABBAGE FAIRY, one of the first narrative films … and it was only the beginning for her. Director Greene explains that so many of those early films are lost, despite being described as sophisticated, emotional, and engaging works. As she moved from France to the United States (New Jersey), Alice founded Solax with her husband, and began experimenting with sound, special effects, gender roles, and story structure.

It’s truly fascinating to see the clips from many of her films, along with snippets from interviews she sat for in 1964 (before passing away in 1968). Director Greene also includes interviews from Alice’s daughter Simone, while I believe are from the 1980’s. Simone is able to fill in some of the gaps in the historical timeline … a timeline that includes many familiar names. It’s also a timeline that results in an abrupt end to Alice’s filmmaking when she relocates back to France after the war.

How did Alice Guy-Blache get lost in history? She was a contemporary of Melies, Lumiere and the Pathe brothers. She was not just the first woman director, she was also one of the first film directors, period. Though the search continues for many of her films, Oscar winning actress Jodie Foster narrates the mission of filmmaker Pamela B Greene to right a wrong … Alice must no longer be forgotten by the industry she helped create.

This entry was posted on Saturday, April 20th, 2019 at 1:20 pm and is filed under Documentary. You can follow any responses to this entry through the RSS 2.0 feed. You can leave a response, or trackback from your own site.