Greetings again from the darkness. And now, the end is near … well, it’s actually over … at least as it pertains to the 2019 Dallas International Film Festival. I watched 22 feature films over the 7 days I attended (I missed opening night), and though bleary-eyed, I certainly recommend every movie lover experience the film festival life at least once. If you happen to be travel-averse, there is assuredly one held not too far from home. Of course, the quality of festivals varies greatly, as do the themes and approach to programming.

The final three movies on the final day delivered a very pleasant surprise, a second French comedy in as many days, and a cultish-thriller that was also a mini-reunion for a couple of “Justified” actors.

Here is my recap of Day 8 movies:

Having played high school basketball, I can honestly say that I never once gave thought to who, when or how the jump shot might have been “invented”. It was ubiquitous to the game … the same as blocking out on defense or coaches yelling from the sideline. Having read the synopsis for this film, I felt a twinge of guilt in not giving any previous thought to the origins of the jump shot. However, since director Jacob Hamilton includes interviews with such hoops luminaries as Stephen Curry (also a producer on the film), Kevin Durant, Bobby Knight, and Dirk Nowitzki, each equally clueless on jump shot history, my ignorance doesn’t seem quite so burdensome.

Of course I had seen the clips of how the game was once played, and director Hamilton includes a fair amount here. Other than the ball, the hoops, and the floor, the old game from the 30’s and 40’s bears little resemblance to what is played today. Although the rules haven’t changed much, the pace of the game and the techniques certainly have.

We are introduced to Kenny Sailors, the man who many credit with originating the modern day jump shot. Mr. Sailors talks of playing his older, much taller brother in games of one-on-one and rarely being able to even get off a shot … at least until that one day when, off the dribble, he rose up and released the ball at the height of his jump – and the ball swished through the basket. A turning point in the sport occurred in Sailors’ front yard.

Included are some photos and clips of Sailors’ high school and college teams – including his having (future Hall of Fame sports announcer) Curt Gowdy as a teammate. There is a bit of Wyoming basketball history detailed, including Sailors’ University of Wyoming national collegiate basketball championship in 1943 at Madison Square Garden. It’s noted that Sailors’ jump shot was nearly indefensible at the time, but he was also an expert ball-handler, tough defender, and above all, a respected team leader.

So yes, this is a basketball story; but it’s even more the story of a very interesting and downright cool gentleman. After college, Sailors left Wyoming as part of the Marines and served in the war. He married and his wife was pregnant when he set out to serve his country – admitting that he assumed he wouldn’t be coming back. Director Hamilton includes interviews with Sailors’ 3 grandchildren and his son, but the most engaging segments of the film allow us to hear directly from the man himself – at the time, well into his 90’s.

Humble, yet proud, Mr. Sailors recounts moving to Alaska as a precaution against his wife’s severe asthma. They lived there 35 years, and he served as both a big game hunting scout and a high school basketball coach. Having two daughters, Sailors worked diligently to develop girls basketball, and he did it not for personal glory (they won a lot of games), but rather for the life lessons the games teaches. He was intent on his daughters having access to the discipline, teamwork and dedication required for a successful team.

We see the iconic Life Magazine photo of Sailors shooting his jump shot, as 9 other players on the court had both feet on the ground, and we understand the impact he had on the game. But it’s the passion he speaks of in regards to life that sticks with us after the film. A very fine athlete who left his mark on the sport, but an even better man who lived a humble and respected life. Director Hamilton’s film uses animation to fill the gaps where no clips or photos are available, and he’s wise enough to know that the greatest impact comes from allowing Mr. Sailors’ smile to light up the screen and our lives. Anyone for a game of H-O-R-S-E?

THE FALL OF THE AMERICAN EMPIRE

French-Canadian filmmaker Denys Arcand won the Best Foreign Language Oscar for THE BARBARIAN INVASIONS (2003), and has a very loyal group of followers for his films. It should be noted that, despite the title, this is not a sequel to Arcand’s 1986 film THE DECLINE OF THE AMERICAN EMPIRE. This one is a comedy-crime drama that is as cynical as it is witty, and perhaps as much social commentary as satire. It’s yet another rip on capitalism while showing that idealism can work wonders (at least if it’s well funded).

“Intelligence is a handicap.” That’s what Pierre-Paul Daoust (played by Alexandre Landry) tells his girlfriend as he breaks up with her in a café. When she points out that he’s a delivery driver (similar to UPS), Pierre-Paul riffs on a number of famous writers and philosophers who he claims were dumb as rocks. Her inquiry into Trump being elected President leads to his conclusion, “imbeciles worship cretins”. He is the kind of guy that has an answer for everything, and possesses a type of oratory expertise that makes his excuses sound like scientific explanations.

One day while on his route, he stumbles into a robbery gone way wrong. Two thieves were in the process of stealing gang/mob money (and lots of it) when a shooting broke out. In the immediate aftermath, Pierre-Paul makes the snap decision to toss the two huge bags of cash into the back of his truck and take off. This kicks off a chain of events that includes his crossing paths with Aspasie/Camille (Maripier Morin) a high dollar escort whose website features a quote from “Racine”. Pierre-Paul is a Ph.D. in Philosophy, so he takes this as a sign.

Shortly after, Pierre-Paul is meeting with Sylvain “the brain” (Arcand regular Remy Girard), a recently released from prison biker who has become an expert on money laundering. The three form an odd partnership and are followed wherever they go by a couple of police detectives. Camille introduces Sylvain and Pierre-Paul to Mr. Taschereau (Pierre Curzi), her dapper former lover who also happens to be the foremost authority on international tax evasion and high finance.

The running joke here is that Pierre-Paul is an upright citizen who has never done anything remotely illegal in his life. In fact, he regularly doles out money to Quebec’s homeless and those down on their luck. He also volunteers regularly at a shelter that feeds those in need. The obvious statement here is pointing out the great divide between the wealthy and the poor.

Arcand’s film is close to being very good, but falls short in too many areas to reach the height it desires. There is a torture scene that seems totally out of place compared to the tone of the rest of the film, and I refuse to make the link to PRETTY WOMAN – another film where the rich guy wins over the good-hearted sex worker. This film talks about “providence” and just rewards that rarely happen. Is it acceptable to do the wrong thing for the right reasons? Does doing good correct a wrong? Heck, is it even wrong to steal from criminals? What the film actually does is serve up obvious targets with no real solutions offered. The self-congratulatory ending with close-up shots of Quebec’s homeless doesn’t help. 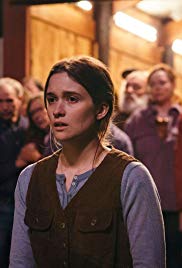 My final film of the festival was listed as a “thriller”, but is realistically more of a drama set in the harshness of Appalachia. A small community of people are devoted followers of the Pastor Lemuel played by Walton Goggins, and snake-handling is key to their interpretative Pentecostal religion. Co-directors and co-writers Britt Poulton and Dan Madison Savage offer up a too-familiar story that tries to walk the line between cult and religious fanaticism. It’s always fascinating to see folks who have somehow become entrenched in such an environment.

Alice Englert is the daughter of Oscar winning director Jane Campion and she stars as Mara, the Pastor’s daughter who tries to fall in line with her father’s preachings, but an independent streak and an attraction to Augie (Thomas Mann) really complicate things for her. Reigning Best Actress Oscar winner Olivia Colman (THE FAVOURITE) co-stars as Augie’s mother, Kaitlyn Dever (“Justified”) is Dilly, local girl and friend to Mara, Jim Gaffigan plays Ms. Colman’s true-believer husband and Augie’s dad, and Lewis Pullman is Garrett, the boy selected as Mara’s husband-to-be.

Those of us on the outside always look on bewildered at how any person ever builds a following such as this Pastor or any other cult leader. How does any parent lose the inherent protective gene they have for their child, and have it overridden by a Pastor who uses serpents to cleanse sin from the believers … some of which make life decisions based on a quilting group. The movie looks great and has terrific performances, but for whatever reason, we are never really drawn into this world – left instead to observe from a distance (which is fine by me as long as snakes are present).

This entry was posted on Saturday, April 20th, 2019 at 1:10 pm and is filed under Articles, Comedy, Drama. You can follow any responses to this entry through the RSS 2.0 feed. You can leave a response, or trackback from your own site.