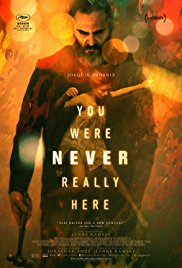 Greetings again from the darkness. Scottish director Lynne Ramsay doesn’t shy away from tough material. In fact, she seems to thrive on it. Following the emotional turmoil of WE NEED TO TALK ABOUT KEVIN (2011) she delivers her latest, which can best be described as brutal. The brutality here is not the on screen violence – we get mostly the aftermath or only see the ‘edges’ of terrible deeds. No, the brutality here is in a world that needs a man like Joe.

Joaquin Phoenix plays Joe, a former military man who lives with his mother. Joe has a particular set of skills that fit into the narrow career niche of rescuing kidnapped girls and ridding society of their captors. Rather than a hired gun, Joe is a hired hammer … ball-peen hammer being his sentimental and strategic weapon of choice. Joe is also a bit mentally unstable, likely suicidal, and haunted by inner demons. Yet he is also patient and kind with his elderly mother (Judith Roberts).

Joe’s most recent job is to find and rescue a State Senator’s daughter (Ekaterina Samsonov) from an underground sex ring run by some powerful political types. The job is a success right up until it isn’t. It’s at this point when Joe finds a reason to live … vengeance. It’s also when Mr. Phoenix becomes a legitimate contender for an Oscar nomination. He’s a hulk of a man with a lumbering gait experiences and dozens of body scars. He has these flashbacks which are so short spurts, at times they feel like mere teases. Soon enough we assemble the pieces to know the baggage from a traumatic childhood event, and the front lines of a horrific war, have created this shell of a man with his own set of principles.

John Doman and Alessandro Nivola have minor supporting roles, but this one rides on the battered and no longer symmetrical shoulders of Joaquin Phoenix, and the creative stylings of filmmaker Lynne Ramsay. It is imagery combined with performance and the result is spellbinding. If you can handle it, the film provides a cinematic journey to depths not typically reached.

Best not to fill in many of the film’s specifics, but the comparisons to TAXI DRIVER are apropos. I found myself wondering if Paul Schrader was consulted in the adaptation of Jonathan Ames’ source material book. The city streets and dank hotel rooms scream gritty 1970’s thriller, and the recurring shots of plastic bags over the head emphasize the claustrophobia Joe experiences. This is doubtless meant to be commentary on politicians and the corrupt power they wield, but it works less as that and more as a glimpse at one man’s darkness. Add to that the pulsating score from Jonny Greenwood, and the creepy use of “My Angel Baby” by Rosie and Originals, and only one word can describe Ms. Ramsay’s film … brutal.

This entry was posted on Thursday, April 12th, 2018 at 9:18 pm and is filed under Drama, Thriller. You can follow any responses to this entry through the RSS 2.0 feed. You can leave a response, or trackback from your own site.