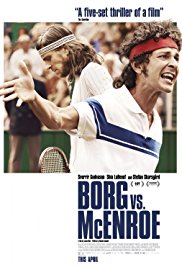 Greetings again from the darkness. For true sports fans, movies about sports tend to be disappointing. It’s not possible for actors to perform athletically at the same level of sports icons, and inevitably, the writer or director is simply unaware of the nuances and details that make an event or player memorable. The 1980 Wimbledon final between Bjorn Borg and John McEnroe was not simply a marketing dream between two polar opposite personalities; it was also a bravura performance by two competitors fighting for their sport’s pinnacle. It was a transcendent event for those of us (including yours truly) who couldn’t take our eyes off the TV screen.

The debut narrative feature film from director Janus Metz and the script from Ronnie Sandahl never really grasp the impact of the match, and instead turn this into psycho-babble about how parents and coaches may damage the person as they create the player. Sverrir Gudnason plays Bjorn Borg and Shia LeBeouf takes on the John McEnroe role. With roots in Denmark, director Metz likely finds the Borg story more interesting and devotes most of the attention to the cool Swede superstar, and Gudnason performs admirably. However, it’s LeBeouf as Super Brat McEnroe that comes across as a much more intriguing character … and we are left wanting more (and better).

The psychological analysis shows a young Borg (played by his own son Leo at ages 9-13) as an uncontrollable hothead on the court. Sound familiar? Yep, we are informed that the young Borg was a mirror image of the McEnroe he would later face across the net. We see that Borg’s coach Lennart Bergelin (in yet another solid turn by Stellan Skarsgard) drives him to bury his emotions and use them as internal fire for intensity on the court. We also glimpse Borg’s legendary OCD tendencies with his rackets, room temperature and even his interactions with fiancé Mariana Simionescu (played by Tuva Novotny).

For McEnroe, we see how his parents pushed him and were never satisfied (a 96 on your Geography test?  What happened?). We see a young man obsessed with tennis and competition. He charts the tournament bracket on his hotel room wall and refuses to speak to a close friend who happens to be his opponent that day. And of course we witness the on court outbursts … some of which are memes almost 40 years later. His dad, played here by Ian Blackman, strikes the familiar pose in the stands of arms crossed while wearing the white floppy hat.

Presenting this as Muzak (Borg) versus Rock and Roll (McEnroe) is really unfair to both men. Cool and collected versus raging madman underscores the amazing tennis talent. Baseliner versus serve-and-volley was the on court battle. The prim and proper traditions of the sport being dragged into the contemporary world by a young up-and-comer is fascinating and was culturally important. It was a rivalry that rejuvenated professional tennis and it deserved better treatment that armchair psychology.

This entry was posted on Tuesday, April 17th, 2018 at 10:31 pm and is filed under Drama. You can follow any responses to this entry through the RSS 2.0 feed. You can leave a response, or trackback from your own site.