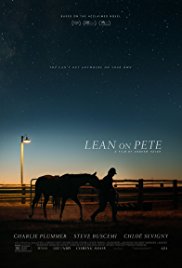 Greetings again from the darkness. Andrew Haigh’s follow-up to his gut-wrenching 45 YEARS (2015) is “a boy and a horse” movie that is every bit as emotionally draining, and secures his spot as one of the best filmmakers at bringing characters we thoroughly believe to the screen. It’s based on the novel by Willy Vlautin and could be described as coming-of-age, slice-of-life, or even a road movie. While it’s each of these, it is also much more … though I fear it is one of this year’s indie gems that will likely slide between the cracks with far too few taking the time to experience it.

Charlie Plummer was most recently seen in ALL THE MONEY IN THE WORLD as Getty’s kidnapped grandson. Here he stars as Charley, a 15 year old boy living a half-step from poverty with his caring, but unprepared single dad (Travis Fimmel). Charley goes for morning runs around town, and his polite mannerisms include effusive praising and expressing gratitude to his dad’s mistress (Amy Seimitz) for cooking a full breakfast – a rare treat for this growing teenager. Charley stumbles into part time work with has-been horse trainer Del (Steve Buscemi), a man whose career, health and demeanor have all seen better days. Horse trainer in this context is far removed from the glamour of the Kentucky Derby. Del works his horses hard for meager winnings on the county fair circuit, and when their time is up, the horses are shipped to Mexico for ‘processing’.

Charley and Del form a bond based on Del’s cheapness and Charley’s work ethic and love of the horses. When tragedy strikes, the movie shifts to a road trip vibe, with Bonnie (Chloe Sevigny) joining on as a jockey. The three are a quasi-family but mostly they are each just trying to get along in a life that isn’t always kind. When Charley ignores Bonnie’s advice to not get too attached to the horses, he and the titular Pete are soon trudging across the backcountry.

Charley’s life on the streets provides many life lessons, but not much joy. He crosses paths with an initially friendly addict named Silver (Steve Zahn), and along the trip, his childhood memories provide some hope – especially as related to Aunt Margy (Alison Elliott). These all feel like real folks that we could meet at any time. Some are helpful, yet the biggest life lesson of all comes roaring through these mostly quiet scenes – people care most about themselves.

This most certainly isn’t a Disney-style horse movie like DREAMER, and in fact, it’s much less a horse story than it is Charley’s story. The core message seems to be that no matter how gentle one’s soul, human nature adapts in times of desperation. It’s pure cinematic pleasure to have both Mr. Buscemi and Ms. Sevigny in the same film, but the shining light here is Charlie Plummer. With little dialogue, he conveys so much about what he is thinking and feeling. His desire is to have some stability – someone or something that he can depend on. It’s the security many of us take for granted. Cinematographer Magnus Nordenhof Jonck (A WAR, 2015) beautifully captures the endless Pacific Northwest landscapes, while also managing the intimate and thoughtful moments. Mr. Haigh’s two most recent films add him to my must-see list … I just wish there were more who would find pleasure in his displays of lack of joy.

This entry was posted on Thursday, April 12th, 2018 at 9:12 pm and is filed under Drama. You can follow any responses to this entry through the RSS 2.0 feed. You can leave a response, or trackback from your own site.