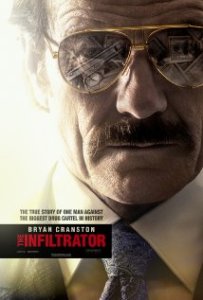 Greetings again from the darkness. The war on drugs has become a bit of a punchline in the real world, but has proven to be fertile ground for filmmaking: Sicario (2015), American Hustle (2013), Traffic (2000). Additionally, the popular Netflix show “Narcos” takes on the same Medellin drug cartel as this latest from director Brad Furman (The Lincoln Lawyer, 2011). The movie is based on the true events of Robert Mazur’s book “The Infiltrator: My Secret Life Inside the Dirty Banks Behind Pablo Escobar’s Medellin Cartel” (a title that’s very descriptive, if a bit long).

Bryan Cranston continues his impressive Hollywood run this time as Robert Mazur, the man who goes undercover to expose the money-laundering system of the cartel. His flamboyant alter-ego is known as Bob Musella, a character that allows Mazur (and Cranston) to show a side not typically seen. His antics get him inside Columbian Drug Lord Escobar’s organization in the mid-1980’s.

When Mazur realizes the traditional method of chasing the drugs isn’t working, he decides the age-old idiom “follow the money” might be a better approach. This takes him inside the world of international money laundering, and he learns that banks and governments are quite dependent on this huge business of drug money movement.

There are specific groups of people here: the government agencies, the small task force, the corrupt (and appreciative) bankers, the various levels within the cartel, and even Mazur’s family … all these forces intertwine to make life difficult for Mazur and his team, and provide a glimpse into the complexities of undercover work.

There are a couple of standout scenes – one involving chicken and voodoo, and another with a briefcase mishap, but my favorite is the Happy Anniversary cake scene in the restaurant where Mazur flashes his alter-ego Musella for his real wife to see … and she is understandably stunned.

The movie does a nice job of capturing the look and feel of the era (30 years ago), but it’s somehow missing the elevated suspense it portends to drag us and the characters through. Some elements seemed impossible to believe – why would Mazur risk his family’s safety? The timeline was a bit muddled. We aren’t sure how much time has passed, but there certainly don’t seem to be enough interactions before Roberto is telling Mazur he is “like family”. It plays a bit like those romance movies where the two leads are head over heels in love after a conversation or two. An element is missing and it affects the level of tension throughout the film. And that’s something even a Leonard Cohen song (“Everybody Knows”) can’t fix.

This entry was posted on Wednesday, July 13th, 2016 at 5:25 pm and is filed under Drama, Thriller. You can follow any responses to this entry through the RSS 2.0 feed. You can leave a response, or trackback from your own site.