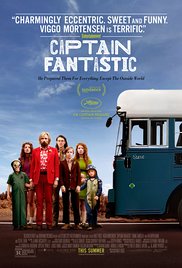 Greetings again from the darkness. There seems to be no end to the theories on how to be an effective parent and raise kids who are productive, well-adjusted and successful.  Writer/director Matt Ross offers up a creative, entertaining and thought-provoking story of one family’s unconventional approach in a world that seems to expect and accept only the conventional.

We are first introduced to Ben (Viggo Mortensen) and his six kids as they are stalking a deer while deep in the Pacific Northwest forest … only this isn’t your buddy’s weekend deer hunting trip. Each family member is covered head-to-toe in mud and other means of camouflage, and the oldest son Bodevan (George MacKay) takes the lead with his knife in what is presented as a rite of passage into manhood.

The family carries out a daily ritual that includes extreme physical conditioning, lessons on survival and living off the land, and advanced education that includes reading such diverse material as Dostoevsky and Lolita. Each evening is capped off with an impromptu musical jam. It’s evident that self-sufficiency, intelligence and family loyalty are crucial to Ben’s approach … an approach that is challenged when circumstances require the family board their Partridge Family bus (named Steve) and take a cross-country road trip into a civilization that doesn’t know what to make of them (and vice-versa).

The film is jam-packed with social commentary on education, parenting, societal norms, societal influences, and even grief. Who gets to decide what is best for a family or what’s the best method for education? Sometimes the dysfunctional family isn’t so easy to identify. Director Ross proves this in a gem of a dinner table scene as Ben and the kids visit Kathryn Hahn, Steve Zahn and their two sons in suburbia.

In addition to the terrific performance by up-and-comer George MacKay, the other actors playing the kids are all very strong and believable: Samantha Isler as Kieyler, Annalise Basso as Vespyr, Nicholas Hamilton as Rellian, Shree Crooks as Zaja, and Charlie Shotwell as Nai. Screen vets Frank Langella and Ann Dowd bring presence to the role of their grandparents and provide the greatest contrast to the off-the-grid existence of the kids.

Viggo Mortensen truly shines here and gives a performance full of grace and depth as he displays many emotions (some of which aren’t so pleasant). He even goes full-Viggo for one of the film’s many humorous moments … though the comedy is balanced by plenty of full scale drama. His best work comes in the scenes when he begins to question that there may be some flaws in his plan … the moments of self-realization are stunning.

Many will note some similarities between this film and Little Miss Sunshine (2006), though this one carries quite a bit more heft. It’s beautifully photographed by cinematographer Stephane Fontaine (A Prophet, Rust and Bone) and captures the danger and solitude of the forest, while also capturing the more personal family dynamics. It’s a film that should generate plenty of discussion, and one of the questions is … will Noam Chomsky Day ever match Festivus in popularity?

This entry was posted on Friday, July 15th, 2016 at 8:28 am and is filed under Comedy, Drama. You can follow any responses to this entry through the RSS 2.0 feed. You can leave a response, or trackback from your own site.