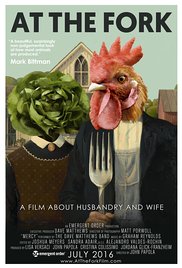 Greetings again from the darkness. “We need to feed the world!” is the battle cry used for years by farmers and ranchers to justify many less-than-appealing approaches to their craft. Director, and admitted omnivore, John Papola provides a mostly even-handed overview of contemporary animal farming and animal welfare as it corresponds to our food supply. However, that’s not to say the documentary is without flaws.

The heavy-handed beginning of the film plops us into the traditional family “rib-fest” at the director’s home, and introduces us to his vegan wife Lisa who cringes at the sight of so much meat on the grill. The couple then begins their journey of research at an animal sanctuary where we mostly watch some lady rubbing the belly of a pig (yes, he likes it). It’s at this point where the film almost lost me for good. Fortunately, the rest of the run time was filled with good information and thought-provoking interviews.

Papola visits multiple animal farmers across multiple channels: pig, cattle, chicken, and dairy. We get to hear first hand from the farmers themselves as they speak to the realities they face: economic vs. moral. There is the constant pressure to get more from less … much of which comes from the corporations who control the bulk of the food supply, distribution and pricing.

We also hear from industry experts like Dr. Temple Grandin and journalist Mark Dittman; the CEO of Whole Foods, John Mackey; the President of the Humane Society, Wayne Pacelle; and the Governor of Iowa, Terry Branstad … each with their own opinions and expertise within this field – some clearly defending their position.

While this is definitely not a hatchet job on animal farming, you can expect to see graphic detail of overcrowding, castration, culling and the removing of calves from their mothers after birth. Some of it is quite difficult to watch, while some segments are inspiring … like watching the hogs wander through the forest and the chickens splashing in the stream.

The film touches on some growing trends like the 5 step labeling run by Global Animal Protection (GAP), and “certified humane” labeling … though these segments seemed rushed and incomplete. We also learn about “Ag Gag” laws and how whistleblowers are dealt with, plus the catastrophic effects of Avian Bird Flu on some facilities.

Beautifully photographed by cinematographer Matt Porwol (Cartel Land), the film captures the people, the land, and the animals, while also driving home the point that consumer spending habits are like votes – they will ultimately determine the level of stewardship for animal welfare and the process of what ends up on our dinner plate. Now all we need is a documentary that teaches us how to shop in a way that leads to widespread ethical treatment of animals.

This entry was posted on Wednesday, July 13th, 2016 at 5:13 pm and is filed under Documentary. You can follow any responses to this entry through the RSS 2.0 feed. You can leave a response, or trackback from your own site.