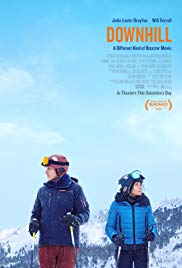 Greetings again from the darkness. Overwhelming apprehension. That’s the feeling I had walking into the theatre for the Americanized re-make of one of my top 10 favorite movies from 2014 … FORCE MAJEURE. Sure, it’s common practice for U.S. filmmakers to farm international cinema for “new” projects, but when they mess with the really good ones, I can’t help but feel nervous to the point of dread. A sliver of hope existed since this new version was co-written (along with Jesse Armstrong, creator of “Succession”, and Oscar nominated for IN THE LOOP) and co-directed by Nat Faxon and Jim Rash, the creative forces behind THE WAY WAY BACK (2013).

Julia Louis-Dreyfus and Will Ferrell star as married couple Billie and Pete. Along with their two teenage sons, they are on an Austrian ski trip meant to help Pete get through grieving his father’s death, and bring the family closer together. If you have seen the original or the trailer, you know what happens next. Pete’s reaction to a near catastrophic event creates a divide between him and the family … especially Billie, who is left shaken. This part is all quite similar to the original film, yet this version is different in so many ways.

Casting two brilliant comedic performers in the lead sends a strong signal that humor will play a role, and that the exceptional gravitas from filmmaker Ruben Ostlund’s FORCE MAJEURE will be softened somewhat. Both of those points hold true. However, surprisingly, this re-make manages to still generate some of the shaken-to-the-core emotions that come from having trust broken in such a startling manner. Ms. Louis-Dreyfus is especially strong here, and carries a much heavier load than Mr. Ferrell. As she is balancing her shock, frustration, and anger, while still attending to their equally shaken boys, Mr. Ferrell is relegated to spending much of the film wearing a wounded puppy look as he attempts to move on without addressing the issue.

Adding to the comedy elements are Zoe Chao (“The Comeback”) and Zach Woods (“The Office”) as Pete’s friends who get drawn into the fracas. Miranda Otto takes a break from her usually dramatic roles to play Charlotte, a wacky resort employee whose personality is a bit out of step with normalcy; although her zaniness succeeds in preventing the weight of the event from crushing Billie. Fans of the original will recognize Kristofer Hivju, who plays a resort security advisor this time. Another difference is that the kids (Julian Grey, Ammon Jacob Ford) play a bigger role in the family dynamics and fallout.

It’s clear that filmmakers Faxon and Rash set out to purposefully make a more mainstream, accessible movie than the Swedish version. The film remains effective at generating conversation about survival instinct and protecting one’s loved ones. It should be mentioned that this is not a typical Will Ferrell movie, and anyone expecting Frank the Tank, may only be pleased with one brief scene. Instead, this is about a man coming to grips with how his actions affected his family, and even his view of himself. 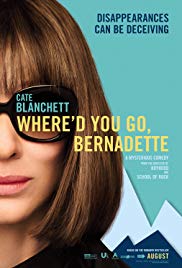 Two time Oscar winner Cate Blanchett plays Bernadette, and as with most of her roles, she embodies the character. It’s a role that more resembles that of her character in BLUE JASMINE than in CAROL. Bernadette is not really a likeable person and she clearly feels out of place in suburbia … yet we find her interesting – in a train wreck kind of way. She’s a bit reclusive and seems to best communicate with Manjula, her virtual assistant in India. The daily dictations come across as therapy as much as directives for such vitals as fishing vests.

Bernadette describes herself as a “creative problem solver with good taste” and as the self-proclaimed “Bitch Goddess of Architecture”. A mid-life crisis is pretty easy to recognize (unless it’s your own). It’s rarely about the person you sleep next to, and often about “finding one’s true self”. This syndrome is especially irksome for a parent, and is actually better described as selfish behavior. Bernadette was a rising star in the Los Angeles world of architecture, and when Microsoft bought her husband Elgie’s (Billy Crudup) software, the couple relocated to Seattle where he could continue his high-tech pursuits. Bernadette stopped designing and focused on being a mother to daughter (and the film’s narrator) Bee (Emma Nelson). In fact, it’s Bee’s request for a family trip to Antarctica that pushes Bernadette to the brink.

The supporting cast is brimming with talent. Kristen Wiig is Audrey, the neighbor and private school mom who manages to push every wrong button for Bernadette. Audrey is a victim of Bernadette’s mean streak in one of the more outrageous scenes in the film. Zoe Chao is Audrey’s friend and Elgie’s new Administrative Assistant. Laurence Fishburne appears as Bernadette’s mentor, and Judy Greer is underutilized in the role of psychologist. Others you’ll recognize include James Urbaniak, Claudia Doumit, and Megan Mullaly. But despite all of that talent, this is Cate Blanchett’s (and Bernadette’s) movie. Is it a powerful performance or an overpowering one?  I’m still not sure.

What is certain is that the Production Design of Bruce Curtis is exceptional. The old mansion is worthy of its own story, and provides a distinct contrast to Audrey’s spit-shined coziness next door. The scenes on the ships at sea are also well done, and Bernadette in the kayak makes for an absolute stunning visual.

Of course the film is based on the 2012 best-selling novel by Maria Semple, and director Richard Linklater co-wrote the script with his ME AND ORSON WELLES collaborators of Holly Gent and Vincent Palmo. We typically discuss how an actor might be miscast, but this time the debate could be in regards to the director. Mr. Linklater is a wonderful director with such diverse films as BOYHOOD (2014), BERNIE (2011), BEFORE SUNRISE (1995) and DAZED AND CONFUSED (1994). He’s a naturalistic story-teller with personalities we recognize. Bernadette looms so larger-than-life, with her grandiose gestures and over-dramatizing every moment that she’s almost cartoonish at times. At times, Linklater seems like everyone else … not sure what to make of Bernadette.

The film differs in many details from the novel, but the spirit remains. This plays like ‘Diary of a Mad-Disgruntled-Unfulfilled Housewife’, and it’s obvious to viewers that Bernadette’s near seclusion is actually her hiding from herself. Ms. Blanchett is a marvelous actress, one of the best of all-time. She is set to play the legendary Lucille Ball in Aaron Sorkin’s planned LUCY & DESI film. Ms. Blanchett commands our attention for Bernadette, whether it’s in the comedy segments or the more philosophical moments. Rarely will you see a film whose Act I and Act III are so tonally opposite. The first part plays like an old-fashioned Howard Hawks comedy, while the last part is Bernadette’s more somber search for artistic expression once she is freed from the constraints of family life. It’s the saddest comedy I can recall.