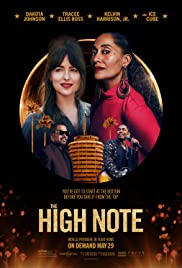 Greetings again from the darkness. Who better to play an aging diva at the crossroads of a hugely successful singing career than the daughter of Diana Ross? Of course, nothing is ever that easy and if Tracee Ellis Ross wasn’t ultra-talented herself, the film wouldn’t work at all. Now, please understand, director Nisha Ganatra’s follow up to last year’s LATE NIGHT is excessively formulaic and predictable, but it’s a pleasure to watch Tracee Ellis Ross (“Black-ish”) as singer Grace Davis and to hear her sing for (I believe) the first time on screen.

The film is from the first (and previous Black List) screenplay by Flora Greeson, a former personal assistant in the music industry, and it follows Maggie (Dakota Johnson, “Fifty Shades” franchise) as Grace Davis’ hard-working assistant. While spending most of her time running errands in her Chevy Nova for her celebrity boss, Maggie dreams of becoming a music producer. See, she studied music composition in college and listened to the radio growing up … and she bobs her head when listening to music she likes. So obviously she’s “qualified.” Maggie is as ambitious as she is lacking in self-confidence and experience.

The aforementioned crossroads Grace is facing has to do with choosing whether to record her first new album in a decade, or taking the safe and financially secure route of accepting a long-term Las Vegas residency. Her agent, Jack Robertson, is played by Ice Cube in full tough-guy mode, as he pushes Grace to bank the cash. Although her career is stuck in recycle gear with live albums and greatest hits, Grace longs to record new music, though she also understands the realities of the music business (and explicitly states the history for anyone not following along – including Maggie).

Maggie oversteps her position with Grace by urging her to write and record new songs. Maggie re-mixes some of Grace’s music and butts heads with the hotshot producer (played by Diplo) Jack brings in to turn Grace’s hits into thumping dance beats. “Is that dope or is that dope? Trick question, it’s dope!” (Diplo nailing the punchline). June Diane Raphael adds her comic flair as Gail, the career moocher who lives in Grace’s pool house, and offers up advice to Maggie on how to milk the situation.

All it takes is a chance encounter at the local market for Maggie to have a career opportunity fall in her lap. She meets charming and smooth David Cliff (Kelvin Harrison Jr, WAVES), and after some classic music banter, she hears him sing and is convinced she can produce his music. The only problem … she lies to him about her profession and experience. Lying and misrepresentation may have played a key role in the music profession over the years, but it creates a real mess for Maggie and David.

When things go sideways for Maggie in every aspect of her life, she retreats to the security of her dad’s (Bill Pullman) humble home/studio on Catalina Island. He’s a DJ and the one who taught Maggie her love for music. His home also leads to the reconciliation that allows the film to move towards the ending it was meant to have. It should also be noted that Zoe Chao and Eddie Izzard have brief roles as Maggie’s roommate and a veteran pop singer, respectively … both talented performers underutilized here.

The film has a similar structure to THE DEVIL WEARS PRADA minus the biting dialogue and insightful commentary on a high profile industry. It briefly touches on ageism, sexism, and nepotism, as well as the ‘money vs art’ question, but the purpose here is entertainment, not enlightenment. True artists have an incessant need to create, often risking a comfortable position to stretch themselves … showing the iconic Capitol Records building a few times, and contrasting Maggie’s Nova with Grace’s Bugatti, doesn’t quite make the philosophical statement that we’d expect for a deeper message. Instead, it’s a feel good movie. It’s comfort food, and it’s delivered with a crisp bow on top. Expect a romantic fantasy, where the love partner is music, and enjoy the talents of Tracee Ellis Ross. And let’s hope they got clearance from Michael B Jordan for his mention.

Available VOD on May 29, 2020 at https://www.focusfeatures.com/the-high-note/on-demand/ 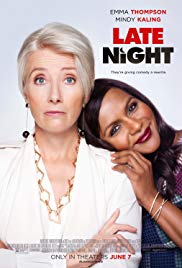 Greetings again from the darkness. ”A woman who hates women”. That is how talk show host Katherine Newbury is described. Oh, and her show’s ratings have been declining for 10 years, she doesn’t even know most of her writers by sight (or name), and we are led to believe that her age has something to do with the new network executive wanting to replace her. Five minutes in, my opinion was that Katherine Newbury doesn’t like people (not just women), is basically a narcissistic jerk, and her age has nothing to do with her being replaced … it’s the fact that her show is lame, she’s not appealing to viewers, and advertising revenues drop with poor ratings. It’s called business – not sexism or gender discrimination. Never once did this seem like someone getting a raw deal. However, it’s only a movie, so I tried to play along.

Very talented actors fill the screen. Two-time Oscar winner Emma Thompson stars as Katherine Newbury, the stuck-in-her-ways, Emmy winning talk show host hanging on based on reputation and longevity in the business. Her character reminds me of David Letterman towards the end of his long run … scandal and all. Mindy Kaling co-stars as Molly Patel, a factory, err, chemical plant worker, who dreams of being a comedy writer, but puts no effort into actually learning the craft. Instead, luck puts her in the right place at the time the show needs a token hire. Enter Molly, a woman of color in a writers’ room full of white men. The interesting dynamic here is that most of the men in the room probably got their seat thanks to connections, while Molly got hers based on gender. Talent and skill seem to play no part for any of them.

The story is basically Molly trying to find her true self by helping Katherine modernize her evil ways and save her job. There are quite a few little sub-stories – can’t really call them subplots – that mostly distract from the overall direction, but serve the purpose of allowing punchlines or supposedly insightful social commentary. John Lithgow plays Katherine’s wise, Parkinson’s stricken husband, and the writers’ boys club includes Hugh Dancy (“Hannibal”), Reid Scott (“Veep”), Max Casella (“Ray Donovan”), Paul Walter Hauser (I, TONYA), and Denis O’Hare (“True Blood”). Ike Barinholtz plays the hot young comedian being groomed as Katherine’s replacement, and it’s Amy Ryan (“The Office”) who really registers as the network President. More of Ms. Ryan’s character and more attention to the network perspective would have improved the film.

Director Nisha Ganatra (“Transparent”) is working from the script by Ms. Kaling, whose real life experiences as a token hire in the industry could have been better presented. A lame stab at a romance distracts from the reactions of the threatened writers materializing in a lack of respect towards Molly, and most of the comedy felt forced and obvious, rather than real and painful (the sources of the best comedy). It’s a shame that most any episode of “30 Rock” or “The Office” provides more insightful commentary and comedy than this film. It’s such a missed opportunity.