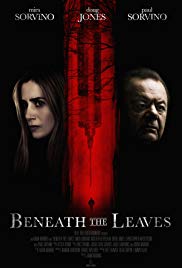 Greetings again from the darkness. It doesn’t happen often, so it’s probably kind of fun for them when a father and daughter are able to appear in the same film. This is writer-director Adam Marino’s first feature film, and he cast Paul Sorvino and Mira Sorvino not as father-daughter, but as Police Captain and Detective. The script, co-written by Marino, Naman Barsoon, Daniel Wallner, and Mark Andrew Wilson treads familiar, yet usually interesting ground … a crime topic covered previously by numerous TV shows and movies.

The film opens with an abusive father (Don Swayze) doing despicable things to his young son and daughter, before the two of them take action against him. We then flash forward to a prison escape that occurred after a fire is set. One of the escapees is an especially demented psychopath with a trait that ties the story back into the opening sequence. What follows is a whodunit police procedural that focuses on Detective Erica Shotwell (Oscar winner Ms. Sorvino) and the four boys who survived their encounter with the twisted prison escapee some 15 years ago. Doug Jones plays James Whitley, the prison escapee returning to finish the job on the 4 that got away. Mr. Jones is best known for his fabulous “creature” work in THE SHAPE OF WATER and PAN’S LABRYNTH.

The four boys, now grown men, are played by Ser’Darius Blain, Christopher Backus, Christopher Masterson, and Kristopher Polaha, the latter of which is now Detective Shotwell’s partner … though, against his vociferous protests, is prohibited by the Chief from working the case that he is oh-so-close to. Also providing support work are Melora Walters, Jena Sims, and fingernails in general. Director Marino’s film is mostly B-level material, and actually much milder than what we see on many TV shows these days. It does, however, reinforce the notion that screwed up kids quite frequently grow into screwed up adults. 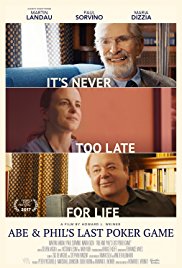 Greetings again from the darkness. There really isn’t an age where one’s level of horniness is of interest to the outside world. The topic is certainly cringe-inducing as we listen in on two old men bemoaning their current state of dysfunction, while simultaneously recalling their glorious past conquests. Were these two gents played by lesser actors than screen legends Martin Landau and Paul Sorvino, there would be no need to tune in.

Writer/director Howard Weiner (a Neurologist and Harvard professor – thanks Google) delivers his first narrative feature film as a statement on old age, pride and dying. In Mr. Landau’s final film, he plays Dr. (not Mister!) Abe Mandelbaum (I’m giving credit as a “Seinfeld” reference, whether intentional or not), who, along with his dementia-riddled wife Molly (Ann Marie Shea), moves into Cliffside Manor – a Retirement Center and Nursing Home. Abe quickly bonds with fellow resident Phil (Mr. Sorvino) as the two exchange dirty jokes and tales of yesteryear.

The other story line involves a nurse (Maria Dizzia, MARTHA MARCY MAY MARLENE) who has reason to believe the biological father she’s never met is a resident at the manor. The obvious development is whether Abe or the notoriously womanizing Phil might be her father. Other minor story lines include the center’s director (Alexander Cook) who admittedly hates old people as he searches for a miracle potion to prevent his own aging, Molly’s struggle with dementia which can only be soothed with her fur coat or relief in bed, and a last hurrah field trip to a local sports bar with the nurse, Abe and Phil.

If not for the vulgarities and three of the most uncomfortable sex scenes you’ve likely ever witnessed, this would have been a textbook Lifetime Channel movie. Watching two pros like Mr. Landau and Mr. Sorvino go at each other is quite a treat – though you best enjoy old men talking about sex, as the subtleties of pride, masculinity and self-identity of men are mere afterthoughts here. Oscar winner Landau (ED WOOD) deserved a send-off more in line with Harry Dean Stanton’s LUCKY, but fortunately he has a 60 year career as his legacy.

“As far back as I can remember, I always wanted to be a gangster.”  That’s how Henry Hill introduces himself.  He is the narrator and key figure in director Martin Scorcese’s 1990 masterpiece.  What follows Mr. Hill’s intro is the film version of Nicholas Pileggi’s non-fiction book, Wiseguy: Life in the Mafia Family (published 1986).  Every so often the perfect match of writer, director and cast occurs, and Goodfellas is one of those rare treats.

Viewing a 35mm print at the historic Texas Theatre just seemed apropo.  Knowing that this is the realized vision of Mr. Scorcese and his long time editor, Thelma Schoonmaker, caused the numerous VHS and DVD viewings over the years to simply fade away.  The silver screen works wonders for a film with such “big” characters, such startling violence, and such a perfectly inter-woven soundtrack.

Ray Liotta plays Henry Hill, the real life gangster who ended up snitching on the mob and entering the Federal Witness Protection program.  This should not be considered a spoiler because Hill’s story is known worldwide and, well, the movie is 23 years old!  Liotta was a relative newcomer when he exploded onto the screen in Jonathan Demme’s Something Wild in 1986.  His manic performance in that movie led Scorcese to cast him as Henry Hill.   The real life Hill spoke at length with Pileggi for the novel, and the result is a very detailed and nuanced look into the life inside a New York crime family. 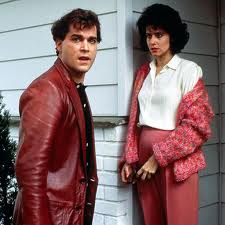 The fascinating aspects are too numerous to touch on them all, but there are some that really stood out in this latest viewing. First, Lorraine Bracco plays Hill’s wife Karen. Watching the development of her character is pure gold on screen. She starts out as a fresh-faced blind date, who pulls no punches in putting Hill in his place after he stands her up … and right in front of his fellow gangsters, no less.  Watching her fall for “the life” is like watching someone get gradually intoxicated.  She seems aware but numb to the rational side of her brain. As Karen develops, she battles through some really tough situations, continues to be Hill’s biggest supporter, and finally his cohort in crime near the end.  She is one of the most interesting and best developed female characters from any gangster movie.

Another really fascinating character to follow is that of Tommy Devito played by Joe Pesci. Tommy is a tough guy born into the life, but the prime example of just never being satisfied. His short fuse temper is responsible for some of the most memorable scenes in the movie.  The “funny like a clown” scene and the fallout from “go home and get your shinebox” are two of the more 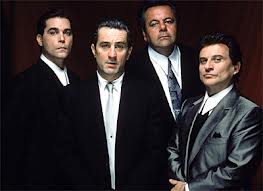 frightening sequences ever seen on screen, and are perfect examples of what a loose cannon Tommy is. This character is based on the real life Tommy “Two Gun” DeSimone, muscle for the Lucchese crime family.

In addition to Karen, Henry and Tommy, the other main character is Jimmy Conway, played by Robert DeNiro. Conway is based on the real life Jimmy “The Gent” Burke, who was supposedly the mastermind behind the infamous Lufthansa heist depicted in the movie.  The Conway character perfectly represents paranoia and greed, while hiding behind the mob loyalty pledge. DeNiro never once overacts here, but his Conway dominates the screen despite the strong presence of Liotta and Pesci … and even Paul Sorvino, who plays mob boss Paulie.  Paulie is based on Paul Vario, the head of the Lucchese crime family. Sorvino plays him as quietly powerful and a guy with a phone phobia (for good reason). Sorvino’s Paulie is the centerpiece of the mob and is totally believable as a guy you better not cross. 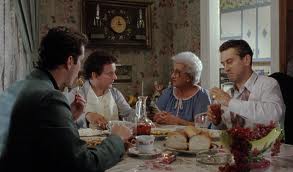 One of the more memorable scenes features Jimmy, Henry and Tommy stopping off at Tommy’s mother house to pick up a shovel … and a large, useful knife.  While there, Tommy’s mother (played by Catherine Scorcese, Martin’s mother) not only makes them a huge 3 am Italian meal, but also shows off some of her artwork, and even tells a joke!

What’s really fun to watch as the film progresses is the change of pace and camera work. Watching young Henry earn his stripes is treated with a light, almost comical touch.  As he becomes fully entrenched, we see a young man enjoying the power and respect of his position. This is crystallized by Scorcese’s infamous long-tracking shot through the back entrance and kitchen of the Copacabana as Henry and Karen end up front row by the stage. The downward spiral is much more frenetic with fast cuts and a desperate feel. Scorcese helps us feel the drug-induced paranoia that dominates Henry.

David Chase has stated that Goodfellas had quite an impact and inspired him to create “The Sopranos”, and the marks are 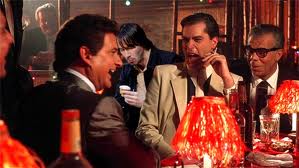 quite clear. There is even a significant crossover in the cast as both feature Frank Vincent, Tony Sirico, Frank Pellegrino, Michael Imperioli and, of course, Lorraine Bracco (who was Tony Soprano’s psychiatrist).

Goodfellas was nominated for six Academy Awards, and Joe Pesci was the only winner (Best Supporting Actor).  It lost out in the Best Picture category to Dances with Wolves.  Scorcese has since directed two other critically acclaimed gangster films: Casino (1995, from another Nicholas Pileggi book), and The Departed (2006, which won Scorcese his first Oscar and also won Best Picture). You might also like to know that Pileggi is the creator of “Vegas”, the new TV show starring Dennis Quaid and Michael Chiklis.  The show is about the mob’s influence in the early “wild west” days of Las Vegas.

For years, movie lovers have been debating whether The Godfather or Goodfellas is the best gangster film. As much as I love debate, I see no reason to choose … they are both exquisite filmmaking, though quite different in style. Both films have provided us direction in life.  The Godfather informed us that “It’s not personal, Sonny. It’s strictly business”.  Goodfellas counseled us “Never rat on your friends, and always keep your mouth shut.”   Far be it from me to question the source of good advice!

***PROFANITY WARNING***  This is the unedited “funny like a clown scene” and it’s definitely NSFW!!!