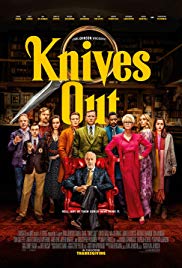 Greetings again from the darkness. “I suspect ‘fow-uhl’ play.” So states the renowned and poetically named private detective, Benoit Blanc. Of course when mega-wealthy, best-selling author Harlan Thrombey supposedly commits suicide after his 85th birthday party by slashing his own throat with a knife, something more sinister (you know, like … murder) must be considered. The violin playing over the opening shots of the palatial Thrombey manor teases us with thoughts of most any year from the past 75. These nostalgic thoughts fade quickly as we begin to meet the players.

Writer-director Rian Johnson has put together a diverse career with such films as indie breakout BRICK (2005), science fiction hit LOOPER (2012) and of course, STAR WARS: EPISODE VIII – THE LAST JEDI (2018). With this latest, he shows a real flair with a rare comedic whodunit, and manages to perfectly execute his twisted script of twisted personalities. Think of this as Agatha Christie meets CLUE via THE ROYAL TENENBAUMS. The overall mangled morality of this entitled family becomes crystal clear as we get to know each. Johnson presents many familiar elements for fans of the mystery genre (the dark mansion, the creepy line-up of hangers-on, the red-herring clues and missteps), and most impressively, he blends those with many creative and surprising moments … some that will have you believing you have it figured out. But even if you do, the long and winding road is an utter blast.

Even with that deep and talented cast, it’s Daniel Craig as Benoit Blanc and Ana de Armas as Marta who stand out. They have the most screen time and neither waste a moment. Mr. Craig’s purposefully comedic southern drawl completes the film’s most memorable character, in fact, one of the year’s most memorable characters. Ms. de Armas finally finds a role to take advantage of her skill. Nurse Marta has a lie-detecting reflux gag that is not just valuable to the case, but also vital to the loudest audience reaction during the film. Mr. Craig and Ms. de Armas will also appear together in the upcoming Bond film NO TIME TO DIE.

During the reading of the will, director Johnson brings in STAR WARS stalwart Frank Oz (best known as Yoda) to play the family attorney, while another scene features one of the all-time great character actors (and Roger Ebert favorite) M. Emmet Walsh (BLOOD SIMPLE). Mr. Johnson also offers a unique spin on classism and the 1%, including a running gag about Marta’s nation of origin.

Johnson’s regular team is in top form here: Cinematographer Steve Yedlin, Film Editor Bob Ducsay, and composer Nathan Johnson (Rian’s cousin). Another deserving of mention is Costume Designer Jenny Eagan, who matches threads with personality about as effectively as we’ve seen, and Production Designer David Crank who creates the ideal mansion of secrets. This film is wickedly clever and barrels of fun. There may not have been a more purely entertaining movie this year … and it’s been a terrific year for movies. Just remember: ‘My house. My rules. My coffee.”

Greetings again from the darkness. Writer/Director Rian Johnson (Brick) delivers a very entertaining, creative, thrilling and clever sci-fi film that features time travel, dark comedy, romance, metaphysics, and enough action to keep just about any viewer engaged … as long as you enjoy using your brain a bit.  This one requires some assembly … and the ability to ignore the horribly distracting make-up/prosthetic/special effects used to make Joseph Gordon-Levitt look like a young Bruce Willis (he doesn’t).

Source Code, the recent film from Duncan Jones, used time travel in very limited segments. In 2074, time travel is perfected, but has been declared illegal. So, of course, only crime syndicates use it. When you think about it, sending your enemies back in time to be killed and disposed of is brilliant. It’s very difficult to solve a missing person case when the body has

been incinerated 30 years prior. The future mob boss known as The Rainmaker hires “loopers” from 30 years past to handle the dirty work. When The Rainmaker begins “closing loops”, he does so by sending the loopers back in time to be killed by their younger selves. Yes, somehow this works.

Well it works until Seth (Paul Dano) chokes up and lets his future self escape. That doesn’t go over well with the modern day (sent from the future) crime boss (Jeff Daniels) who just can’t allow these future guys to be roaming free. Then, just like that, the same thing happens to Joe (Joseph Gordon-Levitt). His future self (Bruce Willis) appears, young Joe flubs the kill, and the next thing you know, Young Joe and Old Joe are seated in a booth at a remote diner

ordering the same breakfast and staring into their own eyes.  You may recall that Mr. Willis is an acting time travel expert thanks to his “trips” in Tweleve Monkeys and The Kid.

It’s impossible not to compare to some other time travel movies (there have been MANY).  There are certainly similarities to The Terminator, but not so much to Hot Tub Time Machine or Bill and Ted’s Excellent Adventure.  It’s a tricky topic because it involves the uncertainty of how things done today might impact what has already happened. Or something like that.  It would have been interesting to get more flavor from the 2074 world, since all we see is the blissful (until it’s not) presence of Old Joe and his saviour bride. Also, you have to believe that if you came face to face with the future “you”, there might be at least a brief Q&A.

Plenty of fun stuff in this one, although, I had a tough time buying a blond Emily Blunt as a Kansas farmer. Her young son Cid, played very well by Pierce Gagnon, is one of the more interesting characters in the film. He is supposed to the young version of the future Rainmaker, and he possesses some unusual traits … with Blunt trying to supply sufficient motherly love to prevent him from spinning off track.

Director Johnson has a knack of tossing in some dark humor at just the right time. Some of the romance seemed a bit forced, but the criminal element and the Joe vs Old Joe stuff was really fascinating to keep up with. If you enjoy movies that are somewhat challenging, and you can suspend reality for the time travel elements, it’s one that you’ll probably find quite entertaining.

SEE THIS MOVIE IF: time travel and sci-fi tickle your fancy OR you want to see Hollywood’s best attempt to make Joseph Gordon-Levitt look like a young Bruce Wills

SKIP THIS MOVIE IF: Hot Tub Time Machine or Austin Powers are the level of seriousness you expect from time travel flicks