Greetings again from the darkness. Historical dramas, by definition, carry added depth and weight to stories that sometimes seem almost beyond belief. Such is the true story of the 1960 Mossad mission to capture Adolph Eichmann, the noted architect of the Final Solution, who was hiding in plain sight in Argentina. You might think there have already been enough Holocaust movies, but director Chris Weitz (ABOUT A BOY) hones in on the personal aspects of loss and anger, and the need for justice.

Matthew Orton’s first screenplay benefits greatly from a terrific cast, especially the two main characters played by Ben Kingsley (Adolph Eichmann) and Oscar Isaac (Mossad agent Peter Malkin). Sir Ben is notably restrained in his performance of the last surviving mastermind of the Holocaust, and one of the most despised men on the planet. His subdued performance aligns perfectly with the “ordinary” man of which we’ve since read. Mr. Isaac adds the element of psychology in his “good cop” approach to getting Eichmann to crack.

Playing much like a heist movie, we see the team assembled and the quite convoluted plan devised. The high risk strategy underscores the desperation so many felt in their need to see Eichmann pay for his atrocities. The manhunt required some political tip-toeing, and we even gain a history lesson on the role of the Catholic Church. A tip from a “secret” Jewish daughter (Haley Lu Richardson) and her father (Peter Strauss) set things in motion. Sylvia (Ms. Richardson) actually dates Klaus Eichmann (played by Joe Alwyn), who is a picture-perfect Aryan carrying on the horrid Nazi tradition of hatred.

Of course, Klaus is the son of Adolph, and the one who spills the beans about his father being “a big deal” in the war … thereby ruining the quiet and mostly unassuming life they have been living with Adolph’s wife (a nearly unrecognizable Greta Scacchi). Sylvia and Klaus meet at a movie when she shushes him and his friends. Director Weitz even includes a clip of IMITATION OF LIFE (1959), a film that not coincidentally stars his mother, Susan Kohner. It’s a nice touch.

Much of the film takes place in the safe house where Adolph Eichmann is blindfolded and spoon-fed. It’s here that the psychological games and political maneuverings begin. Supporting actors who add strength to the film include team members Melanie Laurent (Hanna), Michael Aranov (chief negotiator Zvi), Lior Raz (as the demanding team director), Nick Kroll, and Simon Russell Beale (as Prime Minister David Ben-Gurion). There is a history of bumpy romance between Hanna and Peter, though it adds little to the story.

Alexandre Desplat’s score is terrific, especially during a creative and informative opening credit sequence. “Who did you lose?” is a recurring question throughout, as it’s 1960 and everyone involved lost someone – a driving force behind their persistence and commitment to the cause. The film is focused on the mission to capture, not the details of the subsequent trial; however it does close with archival photos of the actual trial – adding historical relevance to this fine dramatization.

Greetings again from the darkness. Imagine you are sound asleep in bed with your significant other. It’s the middle of the night. Suddenly, the sheriff and his deputies crash through your bedroom door with pistols drawn and flashlights blinding you. You are both taken into custody. For most of us, this would be a terrible nightmare. For Mildred and Richard Loving, it was their reality in June of 1958. Their crime was not drug-dealing, child pornography, or treason. Their crime was marriage. Interracial marriage.

Writer/director Jeff Nichols (Mud, Take Shelter) proves again he has a distinct feel and sensitivity for the southern way. There is nothing showy about his style, and in fact, his storytelling is at its most effective in the small, intimate moments … he goes quiet where other filmmakers would go big. Rather than an overwrought political statement, Nichols keeps the focus on two people just trying to live their life together.

Joel Edgerton plays Richard Loving, a bricklayer and man of few words. Ruth Negga plays Mildred, a quietly wise and observant woman. Both are outstanding in delivering understated and sincere performances (expect Oscar chatter for Ms. Negga). These are country folks caught up in Virginia’s Racial Integrity Act of 1924, though as Richard says, “we aren’t bothering anyone”. The counterpoint comes from the local Sheriff (an intimidating Martin Csokas) and the presiding Judge Bazile (David Jensen) who claim to be enforcing “God’s Law”.

Nichols never strays far from the 2011 documentary The Loving Story from Nancy Buirski, who is a producer on this film. When the ACLU-assigned young (and green) lawyer Bernard Cohen (played with a dose of goofiness by Nick Kroll) gets involved, we see how the case hinges on public perception and changing social mores. Michael Shannon appears as the Life Magazine photographer who shot the iconic images of the couple at home … a spread that presented the Lovings not as an interracial couple, but rather as simply a normal married couple raising their kids.

In 1967, the Supreme Court decision in Loving v. Virginia, unanimously held Virginia’s “Racial Integrity Act of 1924” as unconstitutional, putting an end to all miscegenation laws (interracial marriage was still illegal in 15 states at the time). In keeping with the film’s direct approach, the Supreme Court case lacks any of the usual courtroom theatrics and is capped with a quietly received phone call to Mildred.

Beautiful camera work from cinematographer Adam Stone complements the spot on setting, costumes and cars which capture the look and feel of the era (over a 10 year period). Nichols forsakes the crowd-rallying moments or even the police brutality of today’s headlines, but that doesn’t mean there is any shortage of paranoia or constant concern. We feel the strain through these genuine people as though we are there with them. The simplicity of Richard and Mildred belies the complexity of the issue, and is summed up through the words of Mildred, “He took care of me.” 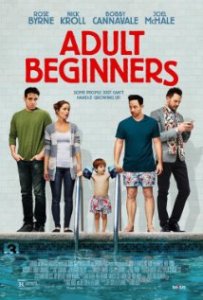 Greetings again from the darkness. It’s certainly understandable that the Duplass Brothers (“The League”) are working relentlessly to take advantage of their window of creative opportunity. In the vein of their HBO show “Togetherness”, this is another com-dram with the theme of thirty-somethings coming to terms with adulthood and responsibility.

In their role as Producers for this latest project, Team Duplass has assembled a strong group: director Ross Katz (himself best known as a Producer of In the Bedroom and Lost in Translation), and funny folks Nick Kroll, Rose Byrne, Bobby Cannavale, Joel McHale, Jane Krakowski, Bobby Moynihan, Paula Garces, and Celia Weston. Unfortunately, the script does not rise to the level of the on screen talent, leaving us with a mostly benign story with few laughs and little message.

Things kick off with Kroll’s character in full crash-and-burn mode when his entrepreneurial offering “Mind’s I” implodes just before it is scheduled for rollout. He loses his money, his investors’ money, and most any semblance of the fair weather friends one accumulates while living the high life in NYC. Packing up what little dignity he retains, Kroll heads to the suburbs to live with his pregnant sister (Rose Byrne), her husband (Bobby Cannavale) and their 3 year old son Teddy.

It’s not that the path is obvious, but rather than it’s executed so blandly. The zingers and physical humor are mostly lacking, and the film can’t seem to decide if it wants us to laugh, or if it would rather prove how tough parenthood and adulthood and responsibility can be. Bobby Moynihan spikes the comedy in a short scene, and Paula Garces may be the most interesting character despite only appearing in a few scenes. The swimming lessons sequences led by Jane Krakowski are mostly vacuous, and are used instead to focus on the insecurities of Kroll and Byrne. As in “Togetherness”, the kids seem to be an afterthought … like a lamp … but less than a sconce.

The scenes are well paced and the story clicks right along, but overall it plays more like a TV show … albeit one with an abundance of cursing, too few laughs, and no new insight into the tough world that awaits as we step out of childhood (evidently in our mid-30’s).