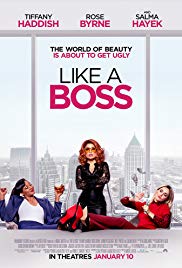 Greetings again from the darkness. It’s no secret that all movies aren’t made to appeal to all movie goers. Even for someone like me who watches an average of 5 movies per week, there are going to be some that are simply not in my wheelhouse. In the case of this latest from director Miguel Arteta (BEATRIZ AT DINNER, 2017), it seems to have been formulated as a “Girls Night Out” treat … a sub-genre with a track record of success.

Although I’m not the target market, I’m not precluded from commenting on the film and making observations. It merely means I’ve watched the movie from a different perspective than many paying customers will. So let’s start with the positives. The cast is excellent. After being wasted and miscast is last year’s disappointing THE KITCHEN, Tiffany Haddish is cut loose and allowed to do what she does best – searing one-liners peppered with raunchiness. Rose Byrne has long been what was once called a comedy “straight man.” Of course that term is no longer used, but I’m not sure what today’s acceptable terminology is. The simple fact is, very few people are as brilliant as Ms, Byrne at playing off an acid-tongued comic. She is a rare talent. As for Salma Hayek, her body of work (and Oscar nomination for FRIDA) speaks for itself.

Mia (Ms. Haddish) and Mel (Ms. Byrne) have been friends since childhood, and are now roommates, best friends, and business partners at the beauty/cosmetic company they founded. The creative and shoot-from-the-hip Mia and the pragmatic and meticulous Mel are personality opposites to the point that Mel has been reticent to explain their serious financial woes to the always upbeat Mia. When cosmetics tycoon Claire Luna (Ms. Hayek) makes an offer to save the struggling company, Mel welcomes the financial relief, while Mia senses trouble.

As you would guess, Mia is right … Claire Luna has darker motives, and soon she is driving a wedge between the two partners and friends. The talented supporting cast includes: Jennifer Coolidge, Billy Porter (who manages to remain flamboyant while being subdued for him), Ari Graynor (“I’m Dying Up Here”), Jessica St. Clair, and Karan Soni (DEADPOOL) as Claire’s assistant. There is also a cameo near the end for those who enjoy a bit of friendly comedy.

Danielle Sanchez Witzel, Adam Cole-Kelly, and Sam Pitman combined on the story and script, and have inserted a few gags that play to the strength of the cast – pot smoking ghost peppers, and boyfriend humor are all at play, and balanced by the strength of female friendships. The business side is so cartoonish (especially Ms. Hayek’s character) that it will likely somewhat offend anyone who actually runs a business, but the raunchy humor and overly emotional character reactions will likely satisfy the intended audience. 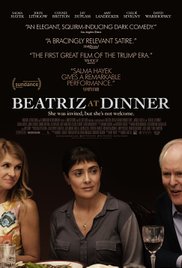 Greetings again from the darkness. The movie industry frequently sources societal worries, concerns, issues and hot topics. It’s been less than 6 months, but here come the anti-Trump movies. Of course some will have clever disguises for their message, while others will slap us across the face. This re-teaming of The Good Girl director Miguel Arteta and writer Mike White actually uses both approaches.

Salma Hayek stars as Beatriz, a masseuse and holistic healer, who comes awfully close to being an angel on earth … unless she’s guzzled a bit too much white wine at your dinner party. Beatriz fights southern California traffic in her clunky VW as she rushes from her gig at the cancer center to Cathy’s (Connie Britton) Orange County cliffside mansion. See, Cathy is hosting a dinner party for her husband’s (David Warshofsky) business associates and she simply must have her massage prior to such a stressful event – after all, she did plan the menu. When Beatriz’s car stalls in Cathy’s driveway, she is invited to stay for the dinner party.

Things get awkward once the actual guests arrive. Alex (Jay Duplass) and his wife Shannon (Chloe Sevigny) are the young, entitled types so enticed by the fancy house and global traveling lifestyles on which they are on the brink. It should be noted that Mr. Duplass cleans up nicely and Ms. Sevigny spends much of the movie smiling – a look for which she’s not normally associated. The real squirming occurs once Doug Strutt (John Lithgow) and his shallow third wife Jenna (Amy Landecker, “Transparent”) arrive.

Beatriz and Strutt are polar opposites with contrasting lifestyles and character. She is a mystical presence with a deep connection to Mother Earth and all living beings. He is the Trump-like figure – charismatic, manipulating and laser-focused on the brass ring. She coddles her pet goat in her bedroom to protect it from a crazy neighbor, while he ignores the rare birds nesting on the valuable land he wants scraped for his newest development.

It’s by no means a superhero movie, but Beatriz is presented as a Mexican-born working class (minimal make-up, functional clothing and shoes) Wonder Woman, while Strutt is the ultra villain out to destroy the planet, one rhinoceros at a time. She views him as “The Source” of Earth’s pain, while he tries to laugh her off as a novelty act. It’s Cathy and her husband who are most taken aback by the direct words of Beatriz, as they have considered her a “family friend” since she helped their daughter through a health scare. How dare she spoil their dinner party!

There is a beautiful aerial shot of the Orange County mega-mansions, but most of the uncomfortable moments are derived through the ongoing duel of angelic Beatriz vs. the poisonous topics of politics and profit. There is no subtlety in the message, but having two talented actors go head to head, does make it more palatable.

Greetings again from the darkness. I have said many times that comedies are the most difficult of all film genres since no two people have the same sense of humor, and everyone considers themselves to be funny. While many people laughed til they cried during The Hangover, others walked out of the theatre or simply had no interest at all. The same can be said for just about any Mel Brooks movie, as well as his contemporary, Judd Apatow. What we do know, is that a comedy’s chance for success comes down to its characters, and in this area, Cedar Rapids works like a charm.

Ed Helms (Andy in “The Office”) stars as Tim Lippe, the most sheltered, naive mid-western insurance agent ever captured on film. Lippe lives and works in Brown Valley, Wisconsin … the most sheltered, naive mid-western town ever captured on film. He truly believes insurance salesmen serve a higher cause.  His only real excitement is found through his “pre-engagement” to his 7th grade teacher played  well by Sigourney Weaver (probably the most worldly person in Brown Valley). When an embarrassing accident claims the life of their hot shot agent, the agency owner (Stephen Root) sends Lippe to the annual convention in Cedar Rapids. His mission: to win the coveted 2-Diamond Award presented by industry legend Orin Helgesson (a pious Kurtwood Smith).

Since a lone character can’t generate many laughs, circumstances at the convention cause Lippe to find himself roommates with a very noble Ronald Wilkes (Isiah Whitlock, Jr from “The Wire”) and fast-talking poacher Dean Ziegler (John C Reilly). These 3 are joined together by Nebraska agent Joan Ostrowski-Fox (Anne Heche). Lippe is quickly introduced to the “real world” (heavy drinking, sexual inneuendo, pranks, etc) by his new friends and after the first 20 minutes of set-up, the lines and settings get funnier and funnier.

As with most comedies these days, the trailer gives away much more than it should; but, unlike most, it leaves plenty of laughs and situations for the film. What really makes this work is that all characters are actually very nice people … they are just a bit exaggerated in their traits. Lippe is a bit too naive. Wilkes is a bit too uptight. Ziegler is a bit too obnoxious, and Fox is just a little too lonely and adventurous. Still, their earnestness is what keeps the film grounded.  One of the best parts of the gag is that somehow Cedar Rapids, Iowa is cast as sin city!  We aren’t talking Vegas, NYC or Paris … but CEDAR RAPIDS!

Mr. Helms is really a comic force. He has the extraordinary ability to never hold back or worry that he might not look cool. Even as the lead character, he knows when scene-stealer John C Reilly should have the spotlight. This is a tremendous asset for a comic.  Mr. Whitlock spouts some funny lines in homage to “The Wire” and Ms. Heche refuses to overplay the lonely wife out for a good time.

I won’t give away much, but will warn that some of the humor is crude … especially most of Riley’s rapid-fire zingers. If you appreciate a balance of outlandish one-liners with humorous real people, then you might want to check this one out. I have only previously known this director, Miguel Arteta, as the guy responsible for Jennifer Aniston‘s best screen performance (The Good Girl). Now I look forward to his next project.

SEE THIS MOVIE IF: you could use a few good laughs here in the middle of winter

SKIP THIS MOVIE IF: you prefer your comedies to be a bit more highbrow