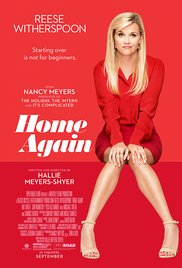 Greetings again from the darkness. Let’s just get this out of the way upfront. There is a proven and established market for mindless fluff designed to allow women to laugh at the messes created by “real life” relationships, careers, and parenting. In fact, first time writer-director Hallie Meyers-Shyer is merely continuing the traditions set by her bloodline. She is the daughter of filmmakers Nancy Meyers and Charles Shyer who shared an Oscar screenwriting nomination for PRIVATE BENJAMIN (1980), and collaborated on other Romantic-Comedies such as FATHER OF THE BRIDE (I and II), and BABY BOOM (1987). Rom-Coms exist to bring some balance to the universe of Comic Book film adaptations for fan boys. It is possible to have quality filmmaking on both sides … no matter how rare it seems.

Oscar winner Reese Witherspoon stars as Alice Kinney. It’s her 40th birthday, and she’s a chipper lady recently separated from her music industry husband (Michael Sheen) and moved with their two daughters (Lola Flanery, Eden Grace Redfield) from New York to Los Angeles. Alice is in full “starting over” mode, including kicking off a new home decorating business. During a drunken birthday celebration with her friends, Alice hooks up with a younger man. The next morning, Alice’s mom (Candice Bergen) invites Harry (the young man played by Pico Anderson) and his two buddies (Nat Wolff, Jon Rudnitsky – all 3 are budding filmmakers) to move into Alice’s house. What follows is a maybe/maybe not romance between Harry and Alice, a bonding between the fellows and Alice’s daughters, new business struggles for Alice, the sudden return to the scene of Alice’s husband, and an endless stream of movie-making meetings for the 3 guys.

That’s a recap of the story, but it doesn’t address the real issue. For years, we have been hearing that the good-old-boy Hollywood network needed to back more female-centric projects: movies about women, movies directed by women, movies written by women, movies produced by women. Well this one has ALL of that, and yet I can only imagine the outrage if a man had written/directed/produced this exact film. Let’s discuss.

Alice is positioned as a “brave” and “strong” woman for moving her kids across the country and starting over. What allows this woman to be so courageous? Well see, she is the daughter of a deceased filmmaker who had a successful career and left her a multi-million dollar California estate … conveniently, one with a guest house for the three young men to live in. And who in their right mind, and with two young daughters, would invite three total strangers to move in – especially the night after – even if one of them looks to be yanked right out of an Abercrombie ad? There is also Alice’s interaction with her first client (played by Lake Bell). Despite despicable treatment from the rich lady, Alice doesn’t stand her ground until yet another drunken bout of liquid courage occurs. The two daughters are smart and cute, but there is an obvious shortage of daily parenting happening here – the daughters seem to show up only when a dose of precociousness is required. The scenes with Alice and her estranged husband are appropriately awkward, but the communication seems hokey … at least until we witness true hokeyness in the cartoonish exchanges between the (now) four gentlemen. In fact, all male characters are written as cartoons, which we might view as “getting even” with the many times female characters were poorly written; however, since the female lead here is just as unreal, that theory doesn’t hold.

The paint-by-numbers approach carries through as we check all the boxes: cute kids, a pet dog, apologetic ex, hunky new suitor, no financial hardships, loads of delightful dialogue, Ms. Witherspoon flashing more facial contortions than Jim Carrey at his peak, at least two cheesy musical montages, a mad dash to the kid’s play/recital/game, and even the cherry on top … a Carole King song at the end. In a year with so many wonderful female-centric films, this one is difficult to comprehend – except that maybe, given who her parents are, perhaps Ms. Meyers-Shyer is actually the beneficiary of that good old boy network of which we’ve heard tell.

Greetings again from the darkness. An effective thriller must either put real people smack dab in the middle of believable peril or facilitate the suspension of disbelief. This latest from writer/director John Erick Dowdle (co-written with his brother Drew Dowdle) takes bits of each of those approaches and provides a pretty intense ride … despite the mostly nonsensical happenings.

We pick up Owen Wilson and his family while on an a transatlantic flight to his new job in some unnamed Asian country that we later learn is just a couple miles down river from the Vietnam border. Not long after their arrival, the generic Prime Minister of this unnamed country is assassinated. The rebel forces responsible for the coup were evidently motivated by the political ploy of Owen’s company, and they aim to kill him.

Lake Bell plays Owen’s wife, and the two of them spend most of the movie on the run together while protecting their two young daughters. Ahh yes, the daughters. While watching this, it made me think that the writers must not be parents, as the kids’ reactions to this extraordinarily dangerous situation involves excessive whimpering combined with whining for food. Anyone without kids will certainly not want any after watching this.

One of the family’s earliest escape sequences involves leaping from one rooftop to another, and all I could think of was how fortunate that this was not a typical American family who, shall we say, struggles with the effects of a fast food diet. In addition to the long jump, Owen Wilson takes over the record for best on screen child toss … an underappreciated cinematic category.

The writers do deserve credit for understanding that Owen and his little family were insufficient to hold our attention for the full run, so they threw in a bizarre super agent played by Pierce Brosnan … or Liam Neeson, or Bruce Willis, or maybe Chuck Norris. No, no – it really was Pierce Brosnan. Action sequences appear spontaneously with Brosnan’s character, as do the funniest lines … and the Kenny Rogers taxi company.

There do seem to be some conflicting story lines. On one hand the big Western corporation is cast as the villain who cares only to capitalize on the local citizens, yet on the other hand, we as viewers are supposed to root for the cute white family as they run from the rebels. Perhaps this is over-thinking … something the filmmakers won’t be accused of.

Most movie lovers enjoy a thriller that creates tension, and there is no shortage of intensity here. Just don’t expect to buy into everything you see.

Greetings again from the darkness. It’s always cool when an actor gets to pursue their first “all in” creative project. Two examples are Joseph Gordon-Levitt with Don Jon and the late Adrienne Shelly with Waitress. This time it’s Lake Bell who is writer, director and leading lady in a story about (at least partially) the empowerment of women in a male dominated field.

This is a very pleasant comedy with dramatic overtones. Ms Bell plays Carol, who is a voice/dialect coach with the dream of breaking into the good ol’ boys club of Voice Over acting. The title of the film was made famous the late great Don LaFontaine, who voiced hundreds of movie trailers that we all watched and listened to. The film begins with a little tribute to LaFontaine and sets the stage as the torch is passed to Sam (Fred Melamed, A Serious Man), who also happens to be Carol’s father, and cocky youngster Gustav (Ken Marino), who has a much different connection to Carol.

The father-daughter issues abound as Sam of course believes Voice Over work should be limited to the deep, powerful voices of men. Carol also gets tossed into the relationship drama of her dad and his much younger girlfriend, the marital struggles of her sister (Michaela Watkins) and brother in law (Rob Corddry), and the workplace affections of her co-worker (Demetri Martin-Lewis). That’s a lot of sub-plots and it causes a loss of focus on Carol’s persistence to find her own voice, so to speak.

The quirkiness of Bell’s character also distracts a bit, but mostly she is charming and likable, and we really pull for her to succeed and overcome.  As a director, Bell does a nice job of helping us get to know the multitude of characters, and though there is much to garner interest, it’s just overload for the viewer. When the story focuses on Bell and her dad’s ignorance and competitiveness, the movie is at its best. This is definitely one to check out, and here’s hoping for more from Ms. Bell

NOTE: my fascination with screen voices was the subject a recent blog post entitled “Golden Voices of the Silver Screen”.  You can find it here: http://wp.me/pKvIs-10n

SKIP THIS MOVIE IF: Fred Melamed creeped you out in A Serious Man … he takes the creep level up a notch here

Greetings again from the darkness. If you have read even a few of my reviews, you know I am not typically a fan of the Hollywood Rom-Com. I find most of them lazy, lame, predictable and irritating. But when legendary comedy director Ivan Reitman (Ghostbusters, Dave, Stripes) gets involved, I will at least pay attention. Here Mr. Reitman directs a script that on the surface will examine the “friends with benefits” phenomenon.

The leads are played by Ashton Kutcher and Natalie Portman, and the twist here is that Portman’s Emma is the driving force behind the agreement with Kutcher’s Adam to not have a relationship … only relations. Even Adam’s friends point out to him that he is living every man’s fantasy. So does anyone think this will really work? Of course not.

First, they are both just so darn cute! And Adam is oh-so-adorable as the sly one hoping to break through and convince Emma that he is worthy of her love. All the physical stuff continues as Adam works his job on the set of a “Glee” knock-off, battles with his dad (Kevin Kline) who is sleeping with Adam’s ex-girlfriend (a wonderful Opehlia Lovibond), and Emma slaves away saving lives in her job as a brilliant doctor. Oh, and one of Adam’s co-workers (a hilariously manic Lake Bell) has a mega crush on him, and Emma’s little sister (Olivia Thirlby) finds true love as does Emma’s friend Patrice (Greta Gerwig from Greenberg), who falls for Adam’s best friend. Wow. All that love and our two heroes just have to keep things between the sheets.

On the plus side, the side stories are enough fun that the film is easily watchable despite the predictable nature of the premise. Even the Portman/Kutcher story is tolerable thanks to the gender-switching nature of their personalities. I would have preferred to see the Friends with Benefits pact extended and examined (it worked in the Stieg Larsson books!). This is easily Mr. Reitman’s best comedy since 1993’s Dave, which also featured Kevin Kline. It’s nice to see Ms. Portman do something lightweight after her fabulous Black Swan performance, but I am really hoping Mr. Kutcher understands that someday he may really have to act and not just smile on cue.

SEE THIS MOVIE IF: you just absolutely must see a Rom-Com this week OR you want to see two very funny actresses going all out (Lake Bell and Ophelia Lovibond)

SKIP THIS MOVIE IF: even a slightly subdued Ashton Kutcher is more than you can take OR you are looking for a hugely surprising plot twist