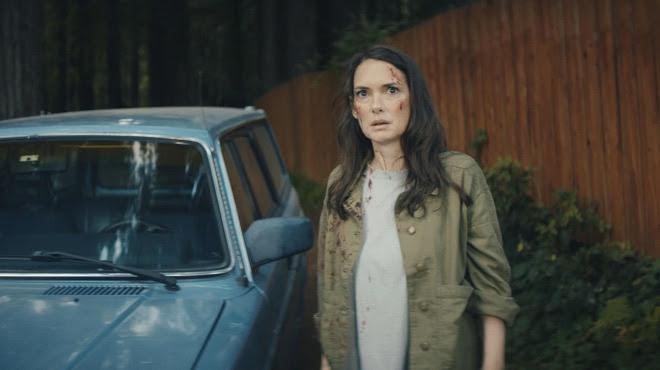 Greetings again from the darkness. There is a fine line between movies that cheat and those that cleverly keep us guessing. The first feature from writer-director Eli Horowitz and Matthew Derby seems to fully embrace cheating as a storytelling structure, relegating us to merely observing rather than guiding us as engaged participants. The film opens with a severely mismatched couple driving deep into the woods for a weekend getaway. We’ve all heard that “opposites attract”, but Kath (an excellent Winona Ryder) and Max (John Gallagher Jr) have been together for a year, and not only do they have opposite life goals, the two can barely hold a conversation. It’s not just awkward, it makes no sense that these two could have co-existed for so long.

Their drive leads to a ‘cabin in the woods’ set-up, as another couple is already settled in. The double-booking leads to another awkward exchange with Max pleading to let them stay the night … two unfamiliar couples sharing the cabin. Taciturn and creepy Al (Owen Teague) and overly exuberant Greta (Brianne Tiu) agree and soon the four are drinking together and playing an adult board game that exposes more personality divides. Despite dating the younger Max, or perhaps because of it, Kath is transitioning into a quieter middle-age life stage. Max is a childish man constantly pressuring Kath to be ‘more adventurous. Al and Greta have an “open” relationship, and she’s unapologetically flirty with Max, while Al mostly scowls. Kath heads off to bed before the others, and when she wakes up the next morning, an upset Al informs her that Max and Greta took off together.

So, Kath does what no real person would do. She heads back to her life as a horticulturalist and enjoys the solitude … right up until she finally reacts the way every other human would have initially. She wonders why long-time boyfriend Max didn’t bother to call or text or mail a postcard. This kicks off her (too late) mission of solving the mystery, and it leads her to connect with the mysterious Barlow (Dermot Mulroney), the owner of the cabin. Kath and Barlow go on a stakeout and end up telling personal secrets to each other – including details of the genetic illness that affected his father and may impact Barlow as well. They seem to connect despite the oddity that brought them together.

Director Horowtiz abuses the flashback crutch by filling in the many otherwise unexplainable gaps that exist in the actual timeline. It’s during these segments when we learn about the characters and circumstances that brought them together, although, to the film’s credit, it does allow us to experience the final reveal as it happens. There are some nice touches throughout, including shots of a shipping container behind the cabin that is visible from multiple spots and at various times. Kath’s work with plants provides a certain symmetry, and Barlow’s backstory is interesting. Perhaps the most unique element here is with only five main characters, the story involves four distinct generations: boomers, Gen X, Millennials, and Gen Z (maybe not exact birthdates, but close enough). The cabin in the woods put us on high alert early on, but the reliance on flashbacks taints the twists to such an extreme that the ultimate reveal of ‘the cow’ is a bit of a letdown, and still feels like cheating.

This entry was posted on Wednesday, March 23rd, 2022 at 4:56 pm and is filed under Drama, Thriller. You can follow any responses to this entry through the RSS 2.0 feed. You can leave a response, or trackback from your own site.