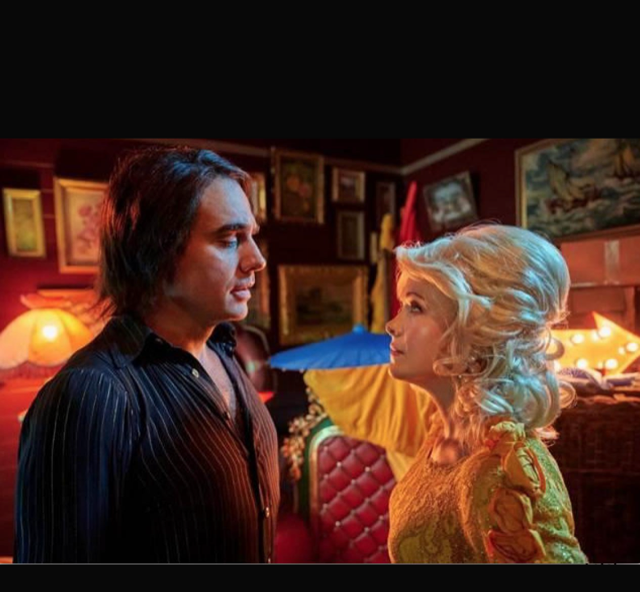 Greetings again from the darkness. Finding one’s self can be a long and arduous life journey for some. Along the way, they may be influenced by parents, friends, co-workers, and even public figures. This phenomenon is explored by director Gracie Otto (sister of Miranda) with a terrific script from lead actor Krew Boylan. It’s a film that starts out light-hearted and comical and evolves into something much deeper … self-actualization.

I’ll admit two things: I was not previously familiar with Krew Boylan and I was truly blown away by her performance here. She stars as Raylene, also known as the titular “Red” thanks to the ginger mop of hair on her head. She’s fixated on Dolly Parton to the point of going to the company banquet dressed as Dolly (either a prank or misunderstanding). Red has struggled to find her way in life, and is fired from her realtor job the day after the banquet due to her drunken improprieties. This is a grown woman living in her mom’s garage, and coincidences being as they are, a talent scout for a celebrity impersonation troupe offers Red the opportunity to audition as their Dolly.

We watch as she improves her act … going from a tolerable karaoke singer to actually impersonating Dolly’s singing voice, not just the big wig, heavy make-up, and frilly costumes (shout out to costume designer Tim Chappel). She becomes part of the Kenny Rogers impersonator’s act, and the two begin an off-stage relationship as well. Red finds that she enjoys the adulation and respect, and even goes so far to have implants for authenticity. Of course, we see what’s happening before Red does. In her search to find herself, she’s disappeared into the act of being someone else. Her lifelong friend asks her, “If you are busy being someone else, who is busy being you?”. Behold the identity crisis.

Exceptional work is provided by the supporting cast. That lifelong friend just mentioned is Francis, played by Thomas Campbell. We make assumptions about Francis based on the early scenes, and those assumptions later teach us a lesson. Red has a strained relationship with her mother played by Jean Kittson, who like every parent, wants happiness and reality for their offspring. Celeste Barber plays the talent scout who discovers Red, and Bobby Cannavale plays the manager of the traveling cast of impersonators (and serves up a nifty Neil Diamond impersonation himself). An unrecognizable Rose Byrne is a hoot as Elvis, and Daniel Webber is a standout as Kenny – the love interest and Kenny Rogers impersonator. Also fun to watch are the impersonators who play such icons as Marilyn, Streisand, Liz, Liza, etc.

Director Otto opens with a terrific and unconventional shot of Red in the bathtub while on a client call. It’s the perfect introduction to a character and story that leads us down many paths. We often hear that celebrities and public figures don’t consider themselves role models, but it’s indisputable that they have influence on many. Dolly Parton is a charming and talented and successful woman, and many of her insightful quotes are utilized here to inspire Red. But while icons may inspire some, it becomes clear that we all need the love and support of family and/or friends to discover our true self. This is a full Australian production, with the exception of Mr. Cannavale, who is an honorary Aussie due to his marriage to Rose Byrne. It’s a story with heart and makes for an entertaining watch.

This entry was posted on Wednesday, March 23rd, 2022 at 4:50 pm and is filed under Comedy, Drama. You can follow any responses to this entry through the RSS 2.0 feed. You can leave a response, or trackback from your own site.