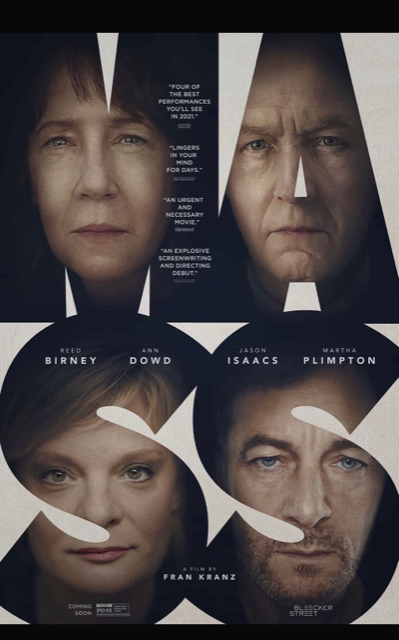 Greetings again from the darkness. A normal life is no longer possible. The question becomes, how does one go on in the aftermath of an unimaginable (yet all too common) tragedy that takes the life of one’s child? This the feature film debut of writer-director Fran Kranz. He’s an actor you’d likely recognize from JUNGLELAND and THE CABIN IN THE WOODS. Rather than choose some lightweight project to kick off his filmmaking career, Franz serves up a gut-wrenching confrontation that would work just as well (if not even better) on stage in live theater.

It’s an awkward and maladroit opening as two church volunteers (Breeda Wool and Kagen Albright) and another woman (Michelle N Carter, who’s either an attorney or a therapist), are preparing an isolated room for what is clearly a high-stakes meeting. The room will have a table and four chairs, and enough refreshments for 20 people. Almost the entire movie will take place in this room, around that table and away from the church choir practice.

The four anticipated guests arrive, and it’s two couples – four people uneasy and unsure about the meeting. After some initial small talk, we finally learn Evan, the son of Martha Plimpton and Jason Isaacs, was shot by Hayden, the son of Ann Dowd and Reed Birney. It’s been six years since the Columbine-like school shooting and both couples are seeking closure to the immense grief they’ve carried. There is also the overwhelming burden of guilt and the weight of blame.

These are four recognizable and accomplished actors working in ways we typically only see on stage. The always superb Ms. Dowd (“The Handmaid’s Tale”) and the often villainous, yet always effective, Mr. Isaacs (“The OA”) are truly at the top of their game, which is to take nothing away from the performances of Mr. Birney (“House of Cards”) and Ms. Plimpton (Keith Carradine’s daughter, and from a child actor in THE GOONIES to a series lead in “Raising Hope”). Their interactions mostly feel grounded in emotions, and we as viewers find ourselves dragged right into their personal misery.

A flower arrangement, a box of Kleenex, bagels, piano music, and a Christmas photo all play a role, but this is an actor’s showcase, and director Kranz gives each their time in the spotlight. These are four people who consider themselves good parents, and one has the fortitude to say it aloud, “I raised a murderer.”

This is couples therapy re-imagined, and it’s a necessary but painful step for four people who have endured more than any parent should endure. Both sides of the table highlight our worst fears as parents, but equally as important, is the need for forgiveness – of others and ourselves. This one will likely stick with you for a while.

Bleecker Street will release MASS in theaters on October 8th, 2021

This entry was posted on Friday, October 8th, 2021 at 7:51 am and is filed under Drama. You can follow any responses to this entry through the RSS 2.0 feed. You can leave a response, or trackback from your own site.