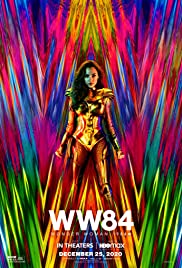 Greetings again from the darkness. Some of the key elements that make Wonder Woman appealing is that she’s smart, she’s nice, she’s dedicated to doing good, she’s grounded in her history, and her use of her powers makes sense (in a comic book kind of way). Most of that holds true in filmmaker Patty Jenkins’ sequel to her 2017 blockbuster WONDER WOMAN. So why did that one work so well, while this one falls short? It’s not an easy question to answer, though it could be as simple as having the wrong target.

Gal Gadot returns as Diana Prince, and this time she’s plopped into 1984 (the year, not the novel). This creates a cornucopia of opportunity for social commentary and satire from Ms. Jenkins and her co-writers Geoff Johns and Dave Callaham. After all, it was the era of atrocious popular music, outlandish fashion, and a relentless pursuit of greed by the “me” generation. The film pounces on each of these by using the return of Diana’s main squeeze, Steve Trevor (Chris Pine), as a device for highlighting the absurdity of belly bags and pastel tank tops for men. In the first movie, the WWI pilot wakes up in Themyscira, and this time, he just kind of materializes in the year of GHOSTBUSTERS, shopping malls, and President Ronald Reagan. While this certainly qualifies as extreme culture shock, the parade of outfits and Steve’s wide-eyed tour through the city are over-the-top, even for their attempted comedic effect.

Over-the-top also describes the film’s two main villains. Pedro Pascal (“Game of Thrones”) plays TV hypester and con man Maxwell Lord. He’s a greedy, self-centered man willing to do anything to get “more”. Kristen Wiig is Barbara Minerva, a bumbling, forgettable klutz who works at the same museum as Diana. She simply wants to be cool like Diana and have people acknowledge her existence. Things shift quickly thanks to the Dreamstone sitting in Barbara’s in-box waiting for research. What follows is more than two hours of seeing the fallout of people having their wishes come true. If you’ve learned anything about human nature during this pandemic year, then you won’t be surprised at how people react to gaining power.

Maxwell Lord is not dissimilar to Lex Luthor in SUPERMAN (1978), as his goal is ultimate power and control – though to what end, he’s not sure. Barbara Minerva was never really power hungry, but a taste of it was much to her liking, and she transitions to The Cheetah for Wonder Woman’s biggest fight scene. There is also a message about what one sacrifices to have their wishes come true. This aspect of the film could be psychoanalyzed were one so inclined. Lord’s relationship with his son is convoluted, and the early Barbara is a mess … making their “sacrifices” a bit less obvious than that of Diana.

The opening sequence is the one this viewer most enjoyed. Spectacular camera work takes us to a competition on Themyscira, as a very young Diana (Lilly Aspell returns) goes against the grown warriors, while Antiope (Robin Wright) and Hippolyta (Connie Nielsen) look on and teach hard life lessons. Not only do these actors return, but most of Ms. Jenkins’ WONDER WOMAN crew is back, including cinematographer Matthew Jensen. The changes include Film Editor Richard Pearson and Hans Zimmer provides the new score. Some of the dialogue is tough to take. As an example, Diana says “I don’t know what to think, Steve. I only hope I’m wrong.” And later, Steve explains, “Flying is easy. It’s only wind and air.” Dialogue like this makes us want to renounce our own wishes. It may be one film later than it should have been, but Ms. Jenkins does deliver a much-appreciated cameo at film’s end, and if nothing else, it leaves us wondering, ‘what would you give up for a wish?’

This entry was posted on Saturday, December 26th, 2020 at 11:34 am and is filed under Action, Fantasy, Thriller. You can follow any responses to this entry through the RSS 2.0 feed. You can leave a response, or trackback from your own site.