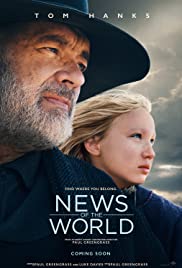 Greetings again from the darkness. Even in the midst of a pandemic, December is Oscar-qualifying time. And that means we get Tom Hanks’ latest movie. This time out, the two-time Oscar winner reunites with his CAPTAIN PHILLIPS (2013) director Paul Greengrass (three “Bourne” movies, and Oscar nominated for UNITED 93, 2006) for Hanks’ first ride into the western genre. Luke Davies (Oscar nominated for LION, 2016) adapted the screenplay from Paulette Jiles’ 2016 novel.

The beloved Mr. Hanks stars as Captain Jefferson Kyle Kidd. We know his full name because he proudly announces it at each stop of his news-reading route. That’s right, even in 1870, which is before television and radio and internet, a person could earn a living reading the news. OK, so it wasn’t the millions that national anchors make these days, as he was dependent on the audience dropping a coin or two in the tin cup. For this they were treated to Captain Kidd’s robust presentation of news and events (and some gossip) from around the nation … straight from the news clippings he collected during his travels.

On the trail one day, Captain Kidd comes across a horrific scene of violence, and a 10 year old girl with a shock of blonde hair. She only speaks Kiowa, but the found paperwork lists her name as Johanna (the first American film for Helena Zengel). It turns out, tragic events in her family’s home many years earlier left Johanna being raised by the Kiowa Indians. Captain Kidd is now on a mission to return her to her surviving relatives (an aunt and uncle), but there are at least three obstacles to his plan: it’s a rigorous trip of about 400 miles, the girl doesn’t want to go, and there remains much tension in the split among the post-war citizenry. So what we have here is a western road trip (trail ride) that’s a blend of TRUE GRIT (minus the witty banter) and THE SEARCHERS.

It should be noted that Captain Jefferson Kyle Kidd has served in three wars, including the recently concluded Civil War. He may make his living wearing bifocals and reading newspapers, but Kidd is no nerd. He handles pressure quite naturally, as we witness in chase scene up a rocky hill. The resulting shootout not only creates the first bond between Kidd and Johanna, but also flashes the Captain’s calming influence. This is a soulful and principled Tom Hanks (as usual), but this time he’s riding a horse and his furrowed brow is working overtime.

The trip to Johanna’s home coincidentally takes Kidd very close to where he once lived – a place that holds his best and worst memories. As viewers we see what Captain Kidd and Johanna don’t. They are both headed back to a past they no longer belong to. Along the way, the two travelers cross paths with characters played by Elizabeth Marvel, Ray McKinnon, Mare Winningham, and the always great Bill Camp. There is nothing rushed about the story or these people. Fans of director Greengrass will be surprised to find an absence of his trademark rapid-cut action sequences, but he has delivered a sweeping epic with superb cinematography (Dariusz Wolski, “Pirates of the Caribbean” franchise), expert editing (Oscar winner William Goldenberg, ARGO), and a terrific score (8-time Oscar nominee James Newton Howard). Mr. Hanks delivers yet another stellar performance (of course), and young Ms. Zengel’s assured performance likely means we will be treated to her work for years to come. It’s a quasi-western period piece that is plenty interesting to watch, yet lacks the memorable moments to justify multiple watches or a place among the genre’s best.

This entry was posted on Friday, December 25th, 2020 at 12:29 pm and is filed under Drama, Thriller, Western. You can follow any responses to this entry through the RSS 2.0 feed. You can leave a response, or trackback from your own site.