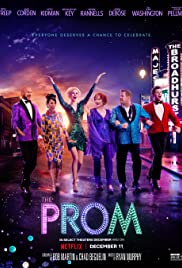 Greetings again from the darkness. The success of his TV series “Glee” and “American Horror Story” has delivered Ryan Murphy the creative freedom to explore other projects. This time out he directs the cinema version of a Tony-nominated musical, and blends star power with newcomers in an extravaganza meant to fill the gap left by the darkened stages of Broadway during the pandemic. Created by Jack Viertel, with a book and screenplay from Bob Martin and Chad Beguelin, it’s a story of homophobia and narcissism, and the battle to defeat both.

Meryl Streep stars as Dee Dee Allen, and along with James Corden as Barry Glickman, their opening night exuberance for “Eleanor! The Eleanor Roosevelt Musical” fades quickly when the reviews hit. Licking their wounds at Sardi’s, the two are told by the producer that nobody likes narcissists. Joined by chorus girl Angie Dickinson (played by Nicole Kidman) and Julliard-educated actor/bartender Trent Oliver (Andrew Rannells), they decide what’s needed to revamp their careers is a ‘cause celebre’. Thanks to Twitter trends, they locate the plight of Emma Nolan (newcomer Jo Ellen Pellman), whose Indiana High School PTA has just voted to cancel prom rather than allow Emma to bring another girl as a date.

As you would imagine, becoming an activist for the wrong reasons (publicity) can make things messy. These flamboyant city slickers aren’t exactly welcomed with open arms by Midwestern folks. Plenty of touching moments occur between Barry and Emma, Barry and Dee Dee, Angie and Emma, Dee Dee and school Principal Mr. Hawkins (Keegan-Michael Key), and mostly, Emma and her closeted girlfriend Alyssa (Ariana DeBose, who will also star in Steven Spielberg’s upcoming remake of WEST SIDE STORY). PTA leader and leading homophobe Mrs. Greene (a fiery Kerry Washington) does a nice job as a bigot and caring parent.

So while a story exists and messages are conveyed, this is, more than anything, a glitzy musical covered in primary colors as only Ryan Murphy can. Each of our main players gets a featured song, with Ms. Streep’s campy “Not About Me” a highlight, along with Ms. Kidman’s Fosse-esque “Zazz”. Mr. Corden probably gets more than his fair share of screen time, while Ms. Pellman and Ms. DeBose shine brightly in their numbers, and both possess lovely voices. Young Ms. Pellman is especially impressive holding her own on screen with Oscar winners Streep and Kidman.

There likely aren’t many gay teen rom-com musicals set in middle-America, especially ones with a Tina Louise reference, but leave it to Ryan Murphy to make it work. There is some quality humor, though it’s likely the song and dance segments are what will draw the audience. Choreographer Casey Nicholaw takes full advantage of the athletic youngsters and fills the screens with backflips and leaps – complimenting the dance moves of the stars. It’s a shame inclusivity must still be addressed, but at least it can be battled in a fun and colorful way.

This entry was posted on Thursday, December 3rd, 2020 at 10:26 pm and is filed under Drama, Musical, Rom-Com. You can follow any responses to this entry through the RSS 2.0 feed. You can leave a response, or trackback from your own site.