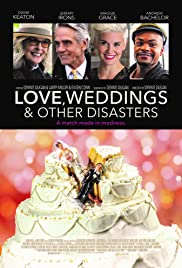 Greetings again from the darkness. Very much in the same mold as the late Garry Marshall’s VALENTINE’S DAY (2010), NEW YEAR’S EVE (2011), and MOTHER’S DAY (2016), this one also utilizes the multi-story approach with all characters ultimately crossing paths as a payoff. If you are familiar with those movies, then you know what to expect here. However, if you are not familiar, there is no good way to prepare you, other than you’ll either love it or hate it.

The opening sequence will be enough to let you know where you fall on the ‘love it or hate it’ scale. Jessie (Maggie Grace, TAKEN) is skydiving with her local news anchor fiancé, and their mid-dive argument leads to a break-up and a crash landing into a lakeside wedding. The video (there’s always a video these days) goes viral, and Jessie becomes a social media celebrity burdened with the moniker, “Wedding Trasher” … not the best marketing for a wannabe wedding planner.

Jessie goes up against legendary wedding planner Lawrence (Mr. Irons) for the soon-to-be Mayor’s wedding, which loosely ties into the Mayor’s brother’s participation in a TV Game Show called “Crash Couples”, where mismatched folks are chained together in hopes of taking home the one million dollar prize. The show is hosted by the film’s director, Dennis Dugan. Lawrence is an egomaniacal high-falutin wedding planner and all-around rude dude who gets set up on a blind date with Sara (Diane Keaton), who is, yes, actually blind. Her entrance is just one of the painfully overdone physical pratfalls dropped in throughout the film, presumably to appeal to a wider comedy audience.

Andrew Bachelor plays the charismatic laugh-a-minute guide on a Duck tour who goes searching for his “Cinderella” … love at first sight for him. Next up we have Diego Bonita as a sensitive guitar player in the band Jessie wants to hire for the Mayor’s wedding. And I’ve yet to mention the involvement of the mafia thanks to the Mayor’s brother’s partner in the “Crash Couples” game. The multitude of characters and story lines all intersect at the wedding Jessie has planned – an event with hurdles just high enough for her to conquer. Some of the characters tie in more easily than others, but it’s best to just go with the flow here, no matter how cringe-inducing it might be at times.

On the bright side that surely most of us can agree on, Elle King (Rob Schneider’s daughter) is superb as the singer in the park who reappears throughout. Her songs fit the story, and her voice and sound are top notch and quite welcome. Romantic comedies sometimes get a bum rap, and few slide as cleanly into the “love it or hate it” mode as this one.

This entry was posted on Thursday, December 3rd, 2020 at 10:20 pm and is filed under Rom-Com. You can follow any responses to this entry through the RSS 2.0 feed. You can leave a response, or trackback from your own site.