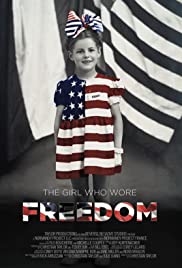 Greetings again from the darkness. I watch dozens of documentaries each year, and I always learn something from the best ones. However, I don’t recall ever being so emotional over a documentary as I was while watching this one from Christian Taylor. Ms. Taylor confesses that she always considered herself a proud Patriot (her son serves in the US Army), but this is her film of “the D-Day that changed me” and where she “truly learned about freedom”.

The film initially focuses on Ms. Taylor’s trip to Normandy for D-Day, and she comments on how the progression of the day bounces between “celebration” and “memorial” back-to-back. As the trip unfolds, it becomes something akin to a spiritual awakening for her. She mingles with the French citizens who have such vivid recollections of June 6, 1944. One lady is a particular standout: Dany Patix Boucherie. Dany was a 5 year old child that day 76 years ago, and we see the photograph of her wearing the American flag dress that her mom sewed from parachute scraps. To this day, Ms. Boucherie leads the cheers for the U.S. soldiers who liberated her town and country.

We hear numerous personal stories from French citizens who were either kids at the time of the invasion, or they are re-telling the stories they’ve heard over the years from their friends and families. 20,000 French civilians died so why are they so grateful and respectful to the American soldiers who fought? Well we hear the answer directly from these folks, and the sincerity and heartfelt emotions are surely to hit you hard. At the heart of all the tragedy and destruction is an undeniable truth – the Americans were not there to conquer, but rather to liberate. That’s the French perspective … young Americans arriving in their country and fighting fiercely and courageously to prevent France from falling to the Germans.

We see photographs of displaced French kids eating meals with soldiers at American camps, and smiling kids draped all over massive tanks to have their picture taken. Stories are told of the thunderous and destructive bombings, and of lost parents, but somehow the sadness was turned to gratitude after so many years.

The Utah Beach museum was founded by a man who was shot by Americans. His son tells the incredible story and shows us a clip of the father telling it in his own words. Rather than hold animosity towards those who shot him, he is instead most appreciative and understanding. Director Taylor then follows Florent Plana, who has dedicated his time and energy to meeting with and documenting the stories of WWII veterans. This was yet another segment that was almost too affecting for me to keep my vision clear (if you get my drift).

We watch a memorial service for veteran Jim Reid, who requested his ashes be spread on the sands of Utah Beach. His friends and family, as well as some locals join in for the tribute. Toward the end, we are informed how crucial it is to keep the French kids involved and informed, so that the era doesn’t pass with the last of the survivors. American soldiers are identified as “superheroes”, and even those who have carried guilt all these years, find themselves liberated by the Normandy visit. The French people will have it no other way. The film only touches on the amazing story of General Theodore Roosevelt, Jr, who despite walking with a cane and being the oldest soldier to take part in the invasion (56), led troops onto Omaha Beach. Also included is a brief interview with Helen Patton, General George Patton’s granddaughter. As a finale, we get yet another look at the flag dress of young Dany Patix Boucherie, and as the film comes full circle, our understanding feels more complete. Such a touching tribute to the good that remains in humanity, and it’s a lesson that has remained intact for three-quarters of a century.

This entry was posted on Tuesday, September 29th, 2020 at 7:25 pm and is filed under Documentary. You can follow any responses to this entry through the RSS 2.0 feed. You can leave a response, or trackback from your own site.