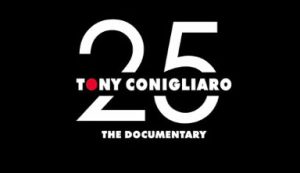 Greetings again from the darkness. Fairy Tales traditionally have happy endings so that our kids form an optimistic view of the world. Unfortunately, director John Ippolito brings us a real life baseball fairy tale with a tragic ending. Tony Conigliaro and his brothers Billy and Richie, grew up in Lynn, Massachusetts, just a few miles from historic Fenway Park, and two ended up wearing the Red Sox uniform – only it was Tony that was the legend … the can’t miss prospect who was presumed to be a future Hall-of-Famer.

It’s highly likely that Tony’s Little League baseball coach taught him to play the game “one pitch at a time”. The irony in the lesson here is that a single pitch vaulted Tony into the Major League spotlight, while another pitch (just 3 years later) basically put an end to the fairy tale. We see a clip from April 17, 1964. It’s Kennedy Memorial Day at Fenway Park (the first home game since President Kennedy was assassinated). Nineteen year old Tony Conigliaro swings at the first pitch he sees in the ballpark he worshipped growing up. Famed announcer Curt Gowdy makes the call as the towering Home Run leaves the yard. What an incredible moment for Tony, his family, and the Boston fans. 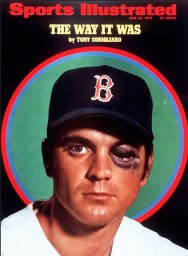 Tony C became the youngest AL player to reach 100 career Home Runs, and he was an all-star in 1967, the year his Red Sox faced Bob Gibson’s St. Louis Cardinals in the World Series. Unfortunately for Tony, he didn’t play in that series. On August 18, 1967, when facing the Angels’ Jack Hamilton, a pitch hit Tony squarely in face, shattering the cheekbone below his left eye. Teammates and fans in attendance that day recall the horrifying sound of the collision of ball and bone. The on-deck hitter, Rico Petrocelli and Red Sox pitcher Jim Lonborg (the 1967 Cy Young Award winner) rushed to Tony, who was crumpled in the dirt by home plate. Carted off by stretcher, the next time most saw Tony was the infamous cover of “Sports Illustrated” highlighting his purple eye swollen shut. It was a punch in the gut to see this rising young star in such a state.

In Boston, 1964 is remembered as the year of The Beatles, Cassius Clay, and the debut of Tony Conigliaro. We learn that he said, “I want to be better than Ted Williams”, and since he remains the youngest AL player to reach 100 career Home Runs, we can’t help but wonder ‘what might have been’. Ippolito’s film is only about 45 minutes long, and along with the piano music courtesy of Sarah Hale Folger, it plays very much like a warm tribute to Tony C’s memory. Very few MLB clips are shown, and we do learn of his 1982 heart attack, subsequent coma, and 8 years of being bedridden before dying in 1990 at age 45. To put that in perspective, another New England sports legend, Tom Brady, is still going strong at age 43).  Tony Conigliaro is the embodiment of “life’s not fair”, and a reminder to take it one pitch at a time.

This entry was posted on Tuesday, September 29th, 2020 at 5:46 pm and is filed under Documentary. You can follow any responses to this entry through the RSS 2.0 feed. You can leave a response, or trackback from your own site.