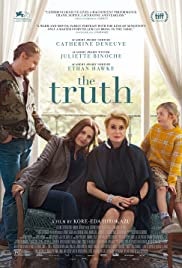 Greetings again from the darkness. Surely every movie lover will savor the chance to watch two of France’s screen titans go at each other as combative mother and daughter. Catherine Deneuve and Juliette Binoche don’t disappoint in this latest from writer-director Hirokazu Koreeda, who was previously Oscar nominated for SHOPLIFTERS (2018).

Ms. Deneuve stars as Fabienne Dangeville, an aging French Oscar winning actress who has recently published her memoir. To celebrate the book, her daughter Lumir (Ms. Binoche) is coming with her family for a visit. Husband Hank (Ethan Hawke) is a self-admitted second rate actor, and their daughter Charlotte (newcomer Clementine Grenier) is awfully cute and meeting her grandmother for the first time. Lumir is a scriptwriter, and harbors less-than-favorable childhood memories of dear old mom.

The personalities of mother and daughter are pretty easy to ascertain. Fabienne admits “I’d rather be a bad mother, a bad friend, and a good actress.” She’s a petty and sometimes nasty woman, who’s quite self-aware. Lumir is the type that has critiqued her mother’s memoir with post-it notes throughout, and calls her out on the false claims of being a doting mother. Most of the movie deals with memories, honesty, and family relationships. It’s not just Lumir who is bothered by book. Fabienne’s long time handler Luc (French screen veteran Alain Libolt) reacts strongly to being omitted entirely, as if he never existed.

Fabienne waves off the criticisms by claiming she’s an actress, so the naked truth is not expected … whereas interesting stories are.  The film opens with Fabienne being interviewed by a journalist (Laurent Capelutto, “Black Spot”), and between this interview and what we learn of the memoir, we can’t help but chuckle at some of the real life similarities. First, Ms. Deneuve’s real middle name is Fabienne, and there are teases of her multiple lovers and “almost” movie with Alfred Hitchcock.

A large portion of the film is spent on the film-within-the-film that Fabienne is working on. It’s a science-fiction film (from a short story written by Ken Liu) that focuses on an unusual and difficult mother-daughter relationship. Lumir spots the obvious symmetry, but we are never really sure if Fabienne does, as she’s so busy firing barbs at the lead actress played by rising star Manon Lenoir (the first feature for Manon Clavel). For the elder Fabienne, acting has always been about being a star, so she struggles seeing the younger actress take a role she herself would have embodied 50 years prior.

Other supporting work comes from Christian Crahay as Jacques, Fabienne’s live-in cook (and more); Roger Van Hool as Pierre (man, not turtle) as Lumir’s father who is listed as deceased in the book; and Ludivine Sagnier (SWIMMING POOL, 2003) who plays a younger version of Fabienne’s character in the film-within-the-film. One key character we never actually see is Sarah, a deceased woman who was a friend and fellow actress to Fabienne, and a kind of surrogate mother to Lumir when she was a young girl. Sarah’s memory still hovers over the lives of Fabienne and Lumir, and may be at the heart of any possible reconciliation. Koreeda is a terrific director, and watching the performances here is quite entertaining. We do have the feeling that the script could have gone deeper emotionally had it not attempted to tackle so much. Additionally, many scenes felt like they were begging for more biting comedy than what was there. This is mostly played straight, which leaves Ms. Deneuve and Ms. Binoche to carry the load – a burden they handle quite capably.

This entry was posted on Thursday, July 2nd, 2020 at 6:34 pm and is filed under Comedy, Drama, World Cinema/Foreign. You can follow any responses to this entry through the RSS 2.0 feed. You can leave a response, or trackback from your own site.