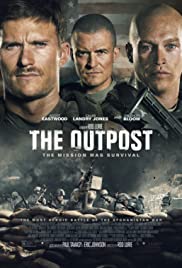 Greetings again from the darkness. Director Rod Lurie’s latest is not only based on a remarkable true story, it uses the real American soldier’s names (and some real soldiers) and depicts the valiant efforts of those who were part of the Battle of Kamdesh in Afghanistan on October 3, 2009. Mr. Lurie (THE CONTENDER, 2000) is a West Point graduate and Army veteran, and the film is based on the book by CNN correspondent Jake Tapper, with a screenplay from Eric Johnson and Paul Tamasy.

We first meet the new arrivals on their helicopter transport under the cover of darkness. They have been assigned to this combat outpost known as “Camp Custer.” The nickname comes from the assumption that everyone there is going to die. Why is that? Well for some reason, this military outpost is positioned so as to be surrounded by the foothills of a mountain range – creating a natural shooting gallery of which the soldiers are sitting ducks. It’s one of the most vulnerable military outposts ever created, and with it comes so many Taliban attacks that the soldiers can’t even take seriously their local scout’s constant warnings, “The Taliban are coming!”

There are 53 soldiers assigned to the camp, and the aura of impending doom hovers non-stop. To compensate, joking around and playing sports are utilized to pass the time between attacks. The men even debate whether calling home is a good thing or not. One of the bunk beds has “It doesn’t get better” carved into the frame – that’s a taste of the kind of inspiration floating around. “Thank you for your service” is pure parody amongst these soldiers, and it’s easy to understand, given the tension they must feel – we are nervous merely watching from the safety of an armchair.

The performances are solid and you’ll recognize a few. Orlando Bloom is Lieutenant Keating, Scott Eastwood is Sergeant Cline Romesha, and Caleb Landry Jones is a standout as Carter, the ex-Marine outcast who is more complex than initial impressions lead us to believe. On an unusual note, the list of “relateds” is quite impressive: Eastwood is of course the son of Clint, Milo Gibson is the son of Mel, James Jagger is the son of Mick, Will Attenborough is the grandson of Sir Richard Attenborough, and Scott Alda Coffey is the grandson of Alan Alda.

Director Lurie divides the film into chapters associated with officers, but the segment that most every viewer will find riveting is the near-40 minute attack on the outpost by hundreds of Taliban gunmen. It’s relentless battle action at a level rarely seen in movies, and we feel like we are in the middle of it. This onslaught feels like hopelessness, followed by desperation, followed by survival mode. Never does it feel like an outright victory, but more a relief for those who survive. Cinematographer Lorenzo Senatore makes this a visceral experience – one we won’t forget.

Very little politics come into play here. Instead this is about the men in the line of fire – their courage – and their desperate attempts to live and hold the outpost. All of which is followed by a haunting breakdown that stuns. This battle resulted in 8 dead and 27 injured American soldiers, followed by many medals, including two Medal of Honors. The closing credits honor those killed in action, and we see photos of the actual soldiers next to the actor who played them.

On Demand and Digital Platforms July 3, 2020

This entry was posted on Thursday, July 2nd, 2020 at 7:05 pm and is filed under Drama, War. You can follow any responses to this entry through the RSS 2.0 feed. You can leave a response, or trackback from your own site.