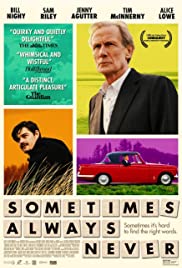 Greetings again from the darkness. “That’s not a word.” “It’s a word.” Anyone who has ever played Scrabble has both shrieked the phrases and been the target of those same screeches from opponents. Word play is in full effect during the feature film debut of director Carl Hunter (a former British pop star). The script comes from the short story “Triple Word Score” by writer Frank Cotrell Boyce, who also wrote the screenplay for the excellent and underrated MILLIONS (2004).

The basic premise has a father searching for his long-missing oldest son. The son stormed out during a hotly contested family game of Scrabble, so dad thinks he can track him down by playing the game online many hours each day. Bill Nighy plays Alan, the owner of Mellor’s Tailor Shop (though he rarely seems to work) and the aforementioned father-on-a-quest. Somewhat annoyed by his father’s pursuit, though still supportive as much as possible, is Alan’s youngest son Peter (Sam Riley, Mr. Darcy in PRIDE AND PREJUDICE AND ZOMBIES, 2016). Peter refers to himself as “not the Prodigal Son”, which is the underlying theme of the story and the father-son relationship.

“Very Quadrophenia” Alan says as he walks by a group of scooter-riding folks. It’s just one of the whip-smart lines Bill Nighy sneaks in. Mr. Nighy has always had a unique on screen energy – one that keeps us off-balance yet eager to see where he leads. He’s perfectly cast for a film that delicately balances deadpan and offbeat humor with awkward relationships and dark moments. Alan is the type of guy who will Scrabble-hustle (and maybe even cheat) a grieving dad for 200 quid, and then turn around and take his gamer-grandson Jack (Louis Healy) from an anti-social to a quite “spruce” young man capable of flirting with his bus stop fantasy Rachel (Ella-Grace Gregoire, “The Five”).

Grief and family dynamics are the core of the story, and the father-son wranglings between Alan and Peter are especially crucial. The film has a somber tone spiced with whimsy to serve up an unusual feel. To go along with that, Production Designer Tim Deckel and Set Decorator David Morison conjure up the visuals we might expect from Wes Anderson or early Tim Burton … colorful wallpaper and vivid furnishings … right down to the knick-knacks and even a label-maker. The aesthetic choices by the filmmaker and crew really combine nicely with the performances in a film that may arrive at a predictable ending, but only after a most interesting journey. We do learn what the title means, and it’s important not to mix up, confuse, or muddle this one with the recent teen abortion drama, NEVER RARELY SOMETIMES ALWAYS.

This entry was posted on Thursday, June 11th, 2020 at 10:28 pm and is filed under Comedy, Drama. You can follow any responses to this entry through the RSS 2.0 feed. You can leave a response, or trackback from your own site.