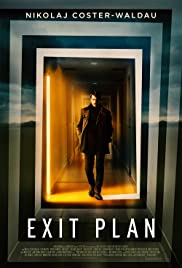 Greetings again from the darkness. Euthanasia, ‘Dignity in Death’ or assisted suicide. Whatever you prefer to call it, those against the idea have likely never been in the situation where medical treatment provides no hope. Max Isaksen (Nikolaj Coster-Waldau, “Game of Thrones”) is an Insurance Investigator. After his most recent scan, the doctor informs him that his brain tumor is growing and surgery is not an option. His bodily functions will slowly and mercilessly dissolve until death takes him.

Max is a non-descript kind of guy. The usually dashing Coster-Waldau is hidden behind old style wire-rimmed glasses and a mustache. He’s happily married, but can’t bring himself to tell his lovely wife Laerke (Tuva Novotny, ANNIHILATION, 2018) about the tumor or his inner thoughts. He’s frustrated that the special diet and app monitor didn’t ‘save’ him, so now he’s suffering with speech issues, headaches, and other ailments that serve as a reminder of the ultimate outcome.

While working with one of his clients, Max learns about the choice her husband made – Hotel Aurora, which promises “a beautiful ending.” It’s an enterprise that excels in secrecy and efficiency. Their sales pitch is an end to life that fulfills your fantasy. Just know that once you execute the agreement, there is no changing your mind. Instead, you are immediately given a sedative and put on a private plane where you are whisked away to the Danish-modern hotel in a remote, stunning setting. Support work is provided by Kate Ashfield (SHAUN OF THE DEAD, 2004) as the fake mother, and Jan Bijovet as Frank, the director of Aurora.

Denmark-born director Jonas Alexander Arnby and writer Rasmus Birch worked together on WHEN ANIMALS DREAM (2014) and here they explore an existential question about life and death, and whose choice it is. There is also the question of saying goodbye to loved ones and choosing the terms at the end. It’s a somber story that twists reality and dreams, and we can’t help but find some similarities to Yorgos Lanthimos’ THE LOBSTER (2015), although that one was infinitely more bizarre. There are a couple of moments of levity – such as asking for tips on tying a noose, and we do learn that Poppy Tea tastes best with lemon. Speaking of beverages, I lost count at the number of scenes featuring wine, juice, water or some other ingestible liquid. Sometimes it’s a bonding experiencing with a toast, while other times, it’s a biological need. Whatever the reason, taking a sip is somehow tied into the circle of life. As The Eagles sang in “Hotel California”, ‘you can check out any time you like, but you can never leave.” Welcome to the Aurora, where we never have to ask, ‘how was your stay?’

This entry was posted on Thursday, June 11th, 2020 at 10:32 pm and is filed under Drama, Thriller, World Cinema/Foreign. You can follow any responses to this entry through the RSS 2.0 feed. You can leave a response, or trackback from your own site.